Want Your Own Indy Car?

Suzuki hopes to sell this 140-mph version of an Indy car through dealerships. And wait till you hear the price. 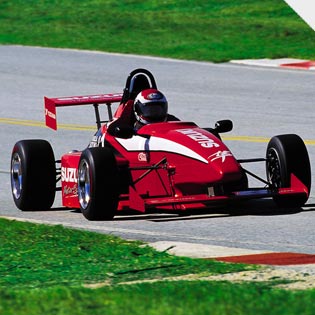 RACECAR FOR YOUR DRIVEWAY
The writer puts the Suzuki Hayabusa through its paces.

As I dart around the twisty Hutchinson Island racetrack in Savannah, Georgia, one thing becomes clear: Hot-rod street cars are nice, but there’s nothing like a purebred racecar.

Then, this revelation: I could own this open-wheel racer, similar to the one Hello Castroneves will use to defend his Indianapolis 500 title on May 26, for just $25,000. It could be yours too, provided Suzuki goes ahead with plans to offer the car in the U.S. The company is now gauging interest.

Amateur racecars have been available since the 1960s, but the Suzuki Formula Hayabusa would be the first built entirely by an automaker–using its big bin of parts–and available through dealers. It’s meant for weekend racers who compete locally through the Sports Car Club of America.

To be fair, the 950-pound Hayabusa isn’t exactly like a real Indy car. Its 175-horsepower engine–pilfered from Suzuki’s flagship motorcycle of the same name–falls 500 horses shy of most Indy cars. And its top speed, 140 mph, is city driving for people like Castroneves, who won last year’s race with an average speed of 224 mph.

Nevertheless, our test laps were fast and fun. The throttle is a bit too responsive to the gas pedal–but with the pedal on the floor, it didn’t really matter. It’s cramped inside too, but Suzuki would stretch it by 4 inches for more legroom and stability. The engine provides a suitable soundtrack, revving to 11,000 rpm as the car accelerates through its six-speed sequential manual transmission.

For 25 large, we say bring it on. But since our vote doesn’t count as much as yours would, we welcome input from readers, and we’ll forward your e-mails and letters directly to Suzuki.