We asked British motorcycle expert Bertie Simmonds to explain the tech of the 200-mph bike, and how it migrates to the street. 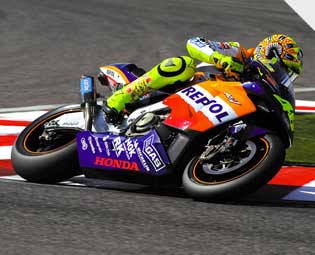 HOW LOW CAN HE GO?
World champ Valentino Rossi proved the worth of four-stroke GP bikes by winning his first race this season.

Today’s racing motorcycle expresses a purity of form and purpose closer to that of a jet fighter than almost any other example of civilian engineering: aluminum, titanium, magnesium, and carbon fiber made to go around in tight circles at higher speeds than seem possible, or sane.

To triumph at this dangerous edge, the racing bike is designed around a contradiction. For a rider to go into turns quicker than his opponents, he needs a short bike with a sharp steering head angle on the front forks. But this makes the bike less stable down the straightaways. Too long a wheelbase and kicked-out forks yield a stable bike that is the racing equivalent of Peter Fonda’s machine from Easy Rider. American road bikers have traditionally favored the latter form, but today the hottest machines on the roads-Ducatis, Kawasakis, and the like-follow the technology and form of the racing machine.

The ultimate machine, at least from this U.K. journalist’s point of view, is the Grand Prix motorcycle-essentially a prototype racer that competes in most parts of the world except the United States, but whose technology often ends up in U.S. street bikes down the line. These machines are operated very close to the crashing edge. Riders lean 45 to 55 degrees and have plastic or wood knee sliders so they can gauge just how far over they are. Their one-piece leather suits incorporate body armor and carbon-Kevlar antiabrasion material (some of the latest suits include titanium inserts, more for style than safety). Tires are handmade, generally steel-belted radials fabricated from an overwhelming array of different compounds to be finely tuned for wet, dry, or in-between weather. The gripping power of these tires is astonishing when you consider that the bikes transmit as much as 230 horsepower through a road-contact patch that’s about the size of a fist.

This breed of motorcycle is currently in a state of technological flux. For the past three decades, engine size has been restricted to 500cc displacement. Four-stroke engines had ruled until the 1970s, when two-strokes, introduced by Japanese factories, became the dominant force in GP racing. The two-stroke engine was simply the best way to get the most power from engines that could not exceed 500cc.

Two-strokes, though, are inconvenient. They’re bad for the environment, they smell, and they don’t really sell to the bike-buying public anymore. Four-stroke bikes do. That’s why this year, four-strokes are back, with displacement of up to 990cc. This has really opened up what you can build to go racing and has turned the class into an engineer’s playground.

Late in 2000, Honda was the first to reveal its new motor, a V5 design with three forward-facing cylinders and two rear-facing ones. Sauber Petronas, of Formula One car fame, built a triple that was essentially a sliver of a Ferrari V10 Formula One engine on a motorcycle frame.

Rumors abound as to what will be in the newest bikes. People talk in hushed whispers about pneumatic valves and traction control and fly-by-wire throttles, but most of this has never been seen in bike racing before for one simple reason: weight. The more complicated a bike becomes, the heavier it becomes, at least until miniaturization catches up. That’s why bulky fuel injection systems are only now becoming the norm in showroom models, and why fly-by-wire electronic throttles (seen in F1 racing for the past decade, alongside those air-driven valves) are only now starting to replace good old cables. You don’t necessarily need pneumatic valves to get the power you require from 990cc-although the Sauber triple has them. Valve springs will still do the job.

The mantra for bikes remains “light is right,” and on the finest machines you’ll see lightweight, superstrong aerospace-grade titanium bolts, footrest hangers, handlebars, and exhaust pipes bolted on to magnesium and aluminum engines that sit inside aluminum frames. All of this is covered in lightweight carbon fiber. The result is a machine that weighs a scant 330 pounds and can break 200 miles per hour. Compare that to a street Harley Davidson, which has 50 to 70 horsepower (except the new V-Rod, which has 115) and weighs a hefty 480 to 700 pounds. Basically, the GP rider sits atop an engine more powerful than the ones in many performance cars, minus most of the car.

All this power suggests a need for a traction control system, but the opposite is true on the track. As a veteran Yamaha engineer responsible for the M-1 four-stroke said when asked about some form of traction control: “Motorcycle racers actually need wheelspin to help steer the bike around corners.”

Whoever wins the races, motorcyclists everywhere will benefit-eventually. Emerging racing technology will find its way into the showrooms. Engines will get more powerful, but, more important for road riders, they will get more clever, as microchip brains for bikes help deliver power in a user-friendly way. Road tires will get better because they’ll have to accommodate the increase in power from these wheel-spinning engines. Diagnostic electronics, now creeping into use on racing bikes, will show up on road bikes. In the meantime, if you happen to be in Europe, Australia, or Japan this year, check out the cutting-edge new four-strokes on the GP circuit.

Though there’s a fanatical U.S. following for
both highway cruisers and dirt bikes, racing tech
and style are the hottest things on the road.

Ducati 998: Ride an (almost) racing machine
Unlike the much-modified GP class racing bikes, superbike machines are fairly similar on both track and street. That means the new Ducati 998, with its 120-plus horsepower Testastretta engine, is a kissing cousin of the machine that won the 2001 world championship
under Aussie racer Troy Bayliss.

Ducati Multistrada: Hybrid prototype from Italy
This bike is a prototype of a machine that takes Ducati racing oomph and adds off-road suspension to yield a bike the company says will handle less-than-perfect pavement. Should play well in the U.S.