Bendable Beams are Back Again 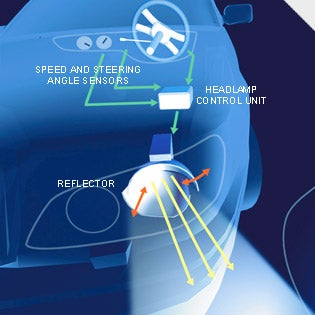 WHEN TO BEND
Sensors send velocity and steering information to the headlamp control unit. The upper half of the headlamp reflector shifts in accordance with the vehicle’s speed and direction.

When auto wizard Preston Tucker presented his legendary Car of Tomorrow in 1948, one of its most eye-catching features was a third headlight. This extra light turned with the car’s front wheels, allowing the driver to see ahead when the vehicle went into a curve. The Tucker, of course, was never mass-produced, and a combination of factors, including expense and safety concerns, led automakers to largely abandon the idea. Until now.

Paris-based Valeo Lighting Systems, which once produced a turning headlight for French automaker Citron, has resurrected the concept, with some major improvements. The new design uses a computer that registers steering wheel position and vehicle speed, then adjusts the upper half of the headlight reflectors accordingly. When the car turns, the light beam turns with it; and when the car speeds up, the lights elevate to allow the driver to see farther ahead. When the car stops at an intersection and the driver activates a turn signal, one of the lights turns toward the car’s prospective path; the other follows the moment the wheels begin to turn.

Of course, with all this beam movement, blinding oncoming drivers is a serious concern. But according to Valeo’s Philippe Hidden, the new system prevents glare by moving only the upper half of the reflector and by limiting the up and down movement of the lights. Valeo plans to improve the system even further by incorporating GPS navigation into the headlight control unit, so that the car will “know” when it’s driving along a roadway where oncoming traffic is visible and adjust the reflectors and headlights accordingly. In the meantime, though the lights aren’t yet allowed on American roads, Hidden estimates that the turning headlight system will begin appearing in European vehicles by the end of 2003.