How does Saturn's new Vue stack up against the overhauled Toyota RAV4 and Honda CR-V?

It’s funny, this new Saturn Vue: Hit the gas pedal and engine revolutions shoot toward the 6,000 mark and stay there, but the vehicle doesn’t react. Then, a second or so later, the power kicks in and the speedometer begins its slow and steady climb.

This pronounced lag comes courtesy of the Vue’s continuously variable transmission, a fuel-saving technology that until recently was relegated to gutless micro-cars like the Subaru Justy. But recent improvements are giving the CVT a new lease on life. The transmission is available in the latest Audi A4, and the Vue becomes the first sport-utility vehicle to get one this spring.

The CVT is also the main reason we wanted to test the all-new Vue, Saturn’s first foray into SUV land. It’s a bold move for a company whose previous foray-into midsize-car land-has yielded marginal results. The small sport-utility category is dominated by mainstays like the Toyota RAV4 and Honda CR-V, plus there’s new (quality) competition from the likes of Jeep, Mazda, and Ford.

We decided to test the Vue against the two benchmark vehicles, the CR-V and RAV4. Our course: a big loop around northern Virginia that included highways, twisty two-laners, and separate off-road segments heavy on dirt, gravel, and mud.

The CR-V and the RAV4, totally redesigned for 2002, are both roomier and more refined than their predecessors-just what the doctor ordered in this more competitive segment. Inside, Toyota keeps the controls simple and instinctive, which our testers liked. The gearshift on the Honda, by contrast, juts out of the instrument panel near the speedometer, and there’s a huge coin box in the middle of the dash where you expect to find radio and climate controls. Saturn also keeps things simple, though we didn’t like its cavernous forward dash, which seems to disappear into the windshield 3 feet in front of you. You’d think this largesse would mean more interior cargo room, but the CR-V can actually hold 6 more cubic feet than the Vue. With all the sheetmetal around you, though, the Saturn does make you feel secure.

The 160-horsepower four-cylinder CR-V is the powerhouse of the group; it also offers the most precise steering and suspension. The RAV4 feels a bit softer, providing a better ride. But with 12 fewer horses in its four-cylinder corral, it’s a step or two behind the Honda. The big Saturn, powered by a 143-hp four, drives more like a small minivan than an SUV-after it gets up to speed, that is.

Which brings us back to the CVT, which admittedly was invented not to improve performance but rather fuel economy. It works like a 10-speed bicycle, with tapered cone-shaped pulleys instead of sprockets and a metal belt instead of a chain. The belt moves along the pulleys continuously, creating an infinite range of gears instead of the usual four. As a result, it’s more efficient-in the Vue’s case, 7 percent more so than a conventional automatic.

A nice advantage? Sure. But the truth is, the Saturn’s mediocre performance is the only good reason not to buy it. Luckily, unlike the CR-V and RAV4, the Vue’s available with an optional six-cylinder coupled with a regular automatic. Our advice: Consider it. 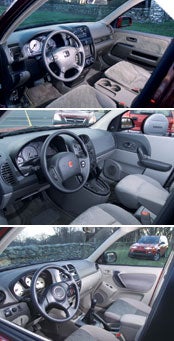 QUIRKY, CAVERNOUS & SMART From top to bottom, the interiors of the Honda CR-V, Saturn Vue, and Toyota RAV4.
Dan Carney