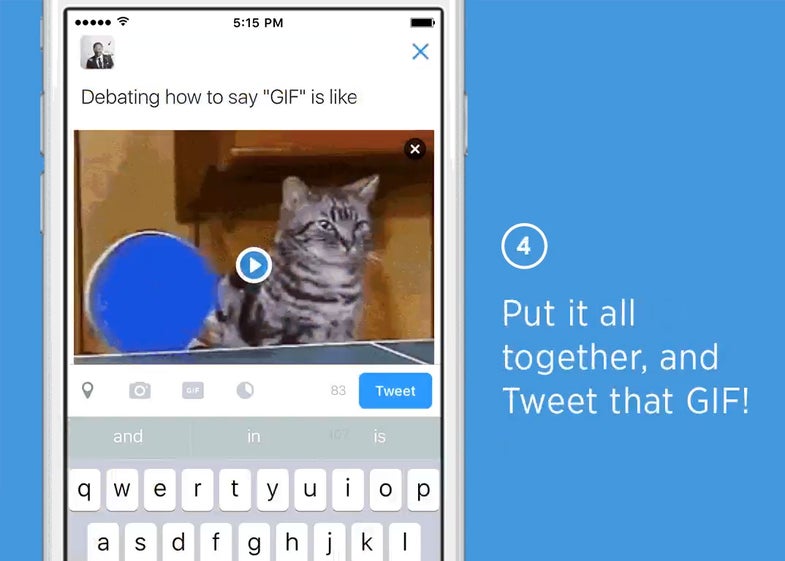 There’s been a lot of debate lately over about whether Twitter is a dying site. Two weeks ago the company announced it was forming a Trust And Safety Council to combat the abuse Twitter has come to be known for, and that came just one day before revealing its poor (though not as poor as predicted) Q4 earnings.

Now Twitter, which is struggling to engage and grow its user base, hopes to do just that with integrated GIF search. In a blog post, Senior Product Manager Sasank Reddy announced that users will begin seeing a GIF search button when composing tweets or direct messages as soon as today.

The button comes from a partnership among Twitter and GIF-hosting sites GIPHY and Riffsy. In separate statements, the founders of the respective sites expressed their excitement for the partnership.

In the blog post, GIPHY founder/CEO Alex Chung said, “GIPHY delivers real-time GIFs as they happen, helping to power Twitter’s live commentary and conversation. GIPHY’s users are creating GIFs for news, entertainment, sports, and expression that can enrich Tweets. We’re excited to work with Twitter to make sharing these GIFs even easier.”

Riffsy co-founder/CEO David McIntosh said in the post, “So much can be expressed with GIFs, and the key is to find just the right one in the moment that quickly and efficiently expresses your emotions.” He continued, “We’re excited to explore this partnership with Twitter and watch Twitter users discover and share their favorite GIFs in their daily lives.”

Are you excited about Twitter’s GIF search?