Burning Man Is Getting Its First Virtual Reality Tent 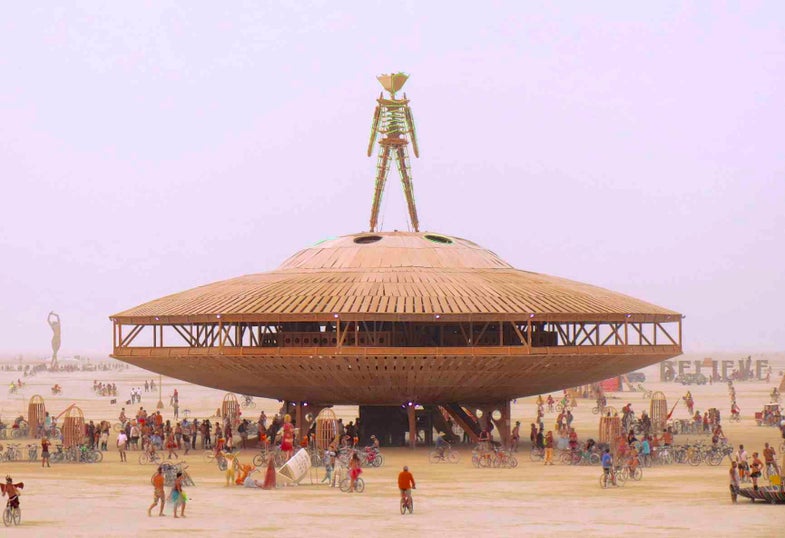 If actually being somewhere that resembles a Mad Max-style wasteland wasn’t enough, virtual reality will make its debut at Burning Man this year, turning the inside of a two tents into trippy 3D canvases.

Two VR enthusiasts, Shannon Norrell and Dara Bonakdar, are bringing VR to Black Rock Desert this year, setting up a total of 16 VR viewing stations alongside a 30×20 projected screen. They’re calling it VRCamp, and users will be able to check out the HTC Vive and Google’s 3D painting app called Tilt Brush. Re/code reports there will also be motion capture suits linked to giant projections of Godzilla and animated robots that will dance along with the crowd.

There was an IndieGogo to initially fund the project, and now there’s a Kickstarter that still has 10 days left to go (at time of writing). VRCamp has garnered some outside support, though. Google will be donating Cardboard VR headsets, Nvidia has offered to power the computers by donating graphics cards, and VR arcade The Void is offering tours for backers who pledge more than $1000 dollars.

Organizers say that VRCamp is definitely going to happen, but even with corporate donations and two crowdsourcing pushes they’re still about $28,000 dollars away from their initial goal of $35,000 dollars.