Build Up Your Imagination With The Meccanoid Kit

The smartest DIY bot to ever spill out of a box 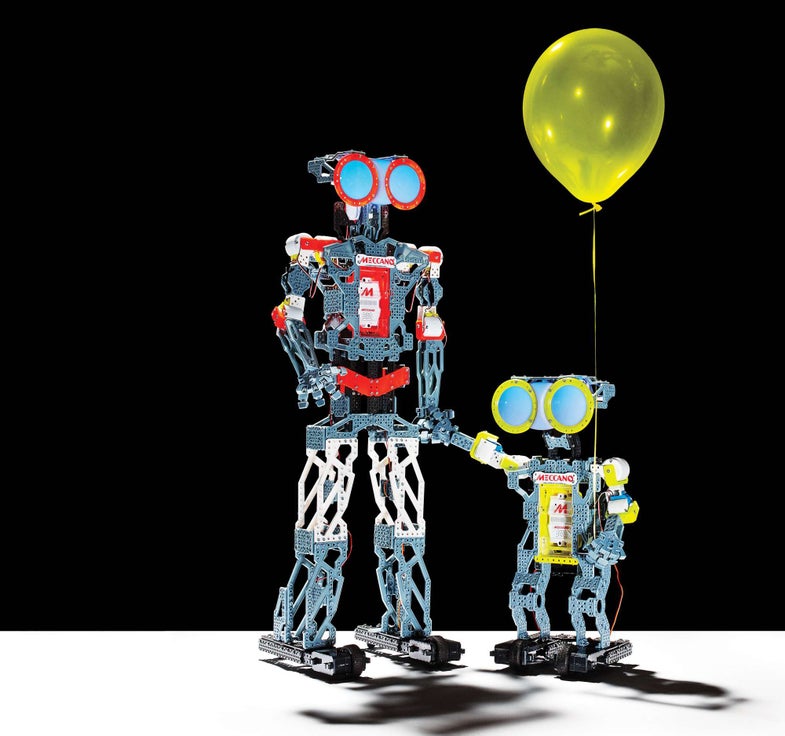 Tinker Toys. Legos. Lincoln Logs. They’re all great. But none of them can compare to the snap-it, screw-it, city-building brilliance of the Erector set, which has inspired tiny tinkerers for more than a century. The latest kit from parent company Meccano is the Meccanoid—the smartest DIY bot to ever spill out of a box. The kit contains hundreds of parts that you can reassemble into countless forms—from scorpions and spiders and kid-size raptors to these lovable humanoids. (Awww.)

Once assembled, Meccanoid can crack jokes, act on voice command, and be programmed with custom moves. You can do this in three ways. First, the robot can learn movements as you adjust its arms and head, just like you would with a puppet. Second, when paired with an app, you can control Meccanoid using a drag-and drop skeletal avatar on a smartphone. Third, you can put a phone in Meccanoid’s chest cradle. The robot can then use the phone’s selfie cam, along with an app, to mirror your gestures.

Unlike heavy metal Erector sets, Meccano’s parts are made of plastic. The reduced weight (and lack of sharp edges) means it’s not going to hurt anyone if it tips over. And although the parts might look a lot different than the metal ones that premiered in 1913, these kits are made with the same original intention: to light up the imagination and get you building.

This article was originally published in the September 2015 issue of Popular Science, under the title “Greetings! My name is Meccanoid.”