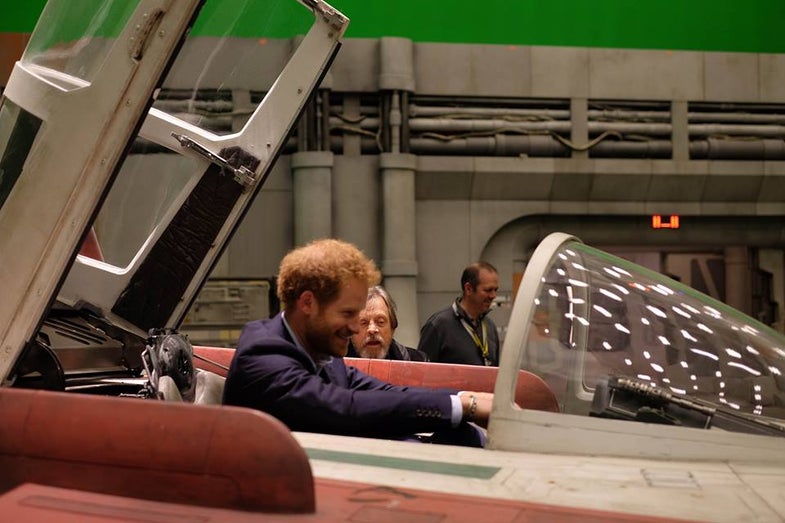 Long ago, in an island far, far away, a pair of brothers unearthed a great secret. Prince William, the Duke of Cambridge, together with his brother Prince Harry toured the United Kingdom’s Pinewood Studios, where parts of Star Wars: The Force Awakens were filmed, and where work is underway on the next movie of the series. During their tour, Prince Harry slipped into the cockpit of a fictional craft, and revealed a little more of the upcoming film: there are A-Wings in it.

The A-Wing first made its screen debut in Return of the Jedi, as one of several new rebel fighters battled the Imperial fleet outside the second Death Star. The A-Wings are canonically fast, pursuit craft made for raids and interception. Most famously (as seen above) one crashed through the bridge of the Super Star Destroyer Executor, destroying it in a bold kamikaze maneuver.

A-Wings, as well as Y-Wings, B-Wings, and any other rebel fighters were notably absent from The Resistance’s arsenal in Force Awakens, with only the ubiquitous and beloved X-Wing making a return to the screen. With Prince Harry’s turn in the cockpit, we now know that the fighter is set for some sort of comeback in a future film, most likely Episode VIII. We know nothing more about what the A-Wing will do, but given the fighter’s past role in the series we can expect something fast or reckless, or both.

Check out more pictures of the royal visit to the studio on Facebook.