Is It The Mustache?

Or could it be that steroids have a lasting effect? 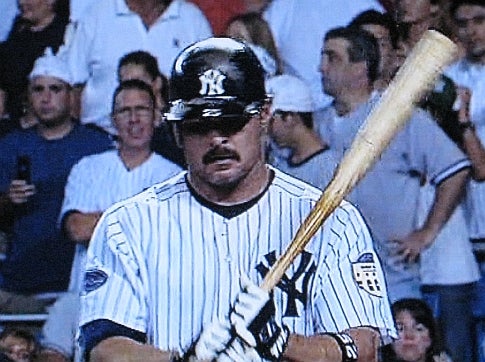 New York Yankee Jason Giambi was a great power slugger while he was using steroids. After his admission, Giambi slumped for several years, before introducing a Burt-Reynolds-style, apparently all-powerful ‘stache. But research presented at the American Physiological Society suggests Giambi, and others from the steroid era, could still be benefiting from their abuse years after their last dose.

Researchers from Sweden looked at power weightlifters that had stopped using anabolic steroids years before. The study found that while the drugs could no longer be detected, a physiological difference still existed that could benefit the athletes.

The study analyzed three groups of lifters: previous users who hadn’t used in years, current lifters who had never used, and current lifters who were still using. Muscle fiber distribution, fiber area, and a handful of other biological indicators were tested in the vastus lateralis muscle (quadriceps) and the trapezius muscle.

Despite ditching the needles and no longer lifting, the previous users had similar fiber area intensity and nuclei per fiber as that of the other groups.

According to the lead researcher, Dr. Eriksson, “It is possible that the high number of nuclei we found in the muscle might be beneficial for an athlete who continues or resumes strength training, because increased myonuclei opens up the possibility of increasing protein synthesis, which can lead to muscle mass.” He added, “Based on the characteristics between doped and non-doped power lifters, we conclude that a period of anabolic steroid usage is an advantage for a power lifter in competition, even several years after they stop taking a doping drug.”

Uh, but what about the mustache?