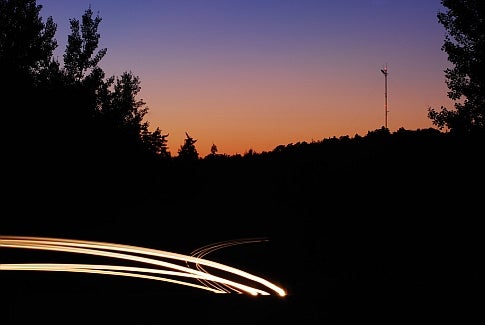 Every midnight jogger or kid at Halloween is equipped with something that glows in the dark, from reflective tape to patches on shoes. Nobody wants to end up on the front grill of their neighbor’s Hummer. But, for a driver, knowing that something’s up ahead is different from knowing exactly what is in the road. Illuminite technology laces reflective material into the fabric of a garment, providing a silhouette that will distinguish little Jimmy from the next mile-marker sign. Sounds sketchy, till you stand in a darkroom and point a flashlight on the shirt. A completely pitch-black shirt lights up like a Christmas tree.

Data from the National Highway Traffic Safety Administration shows that pedestrian fatalities are on the rise, with nearly 5,000 occurring in 2005. Illuminite hopes to reduce those numbers with a patented technology: Microscopic reflective particles called “Satalite Dishes” cover the fabric. The entirety of the arms and shoulders are reflective, not just small strips or piping as in most reflective garments. On the Illuminite website, shoppers can roll their mouse over the various products, to see the gear get lit up.

According to Illuminite, the process by which a motorist reacts to an incident on the road is known as the perception-reaction time (PRT). The company lists six stages of PRT:

Illuminite claims their technology improves reaction time for the critical Stage 2. Since the launch in 1999, sales have exploded recently. A new “24-hour visibility” collection was released this year, with some bright colors to protect little Jimmy when he walks home from school in the daytime.