A new tool turns your television into a motivation aid 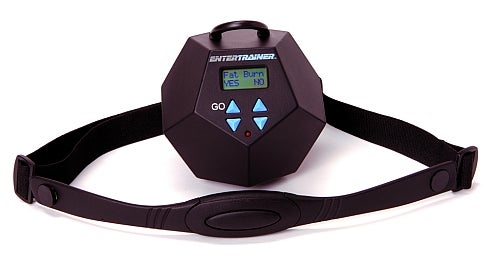 An EKHO wireless heart rate monitor included with the purchase sends data to the Entertrainer box, which functions essentially as a universal remote. Users enter their age and intended workout intensity while the Entertrainer calculates a heart-rate target zone. Users can also specify an exact rate they want to maintain. Every ten seconds, your heart rate is checked. If you slow down a bit, the television’s volume will decrease in 20-percent intervals, warning you that your slacker ways aren’t cutting it. Should you ignore the motivation, the television will be turned off as punishment. When you get your head back in the game, the TV will turn back on automatically. The box can be hung off any fitness equipment or just rested next to that box of candy bars on the coffee table. In the Wii world we live in, it might ensure Billy really is getting fit with his Wii Fit. The original price was a somewhat absurd $139.95, but this week it dropped to a much more reasonable $39.95.

I feel obliged to add a word of caution to anyone interested in the purchase. Imagine a mom at home who misses the climactic moment in Days Of Our Lives? Or how about a University of Florida alumnus who sees his TV turned off on a critical fourth-quarter play? Or maybe the teenage who misses Ryan Seacrest announcing which American Idol is safe for this week? That’s just to say: this should only be used during appropriate programming.