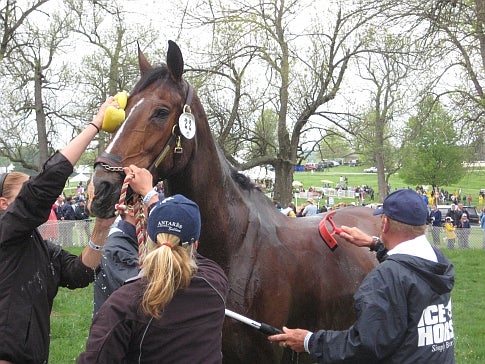 Every four years, we watch. We marvel at badminton and wonder about the modern decathlon. With more than 300 gold medals awarded across 37 disciplines, our lives are suddenly much less productive. In this edition of “know your Olympic sport,” we focus on the largest athletes in Beijing and how to keep them cool (not you, Yao).

Let’s be honest. We don’t know much about equestrian, other than the tight pants. Below are some basics straight from the Olympic website before we hit the science.

There are three equestrian disciplines contested at the Olympics, with an individual and team event in each, making six events on the Olympic program. The three disciplines are jumping (or show jumping, or Prix de Nations as a team event), dressage, and eventing. Jumping consists of negotiating a series of obstacles, with the goal being not to disturb the fences. Dressage is a sort of ballet on horseback in which the rider guides the horse to perform certain intricate stepping maneuvers. The scoring is done by judges who evaluate how well the horse executes the moves. Eventing combines the above two disciplines, and adds a third competition of riding a cross-country course on horseback (over and around obstacles, ditches, streams, and tree trunks). Scoring is by a series of tables evaluating each day’s performance.

Leading a Horse to Ice Water

As the saying goes: to give a horse an ice bath, you need a mighty large bath. But, after running the six-kilometer cross-country component of the eventing competition, the horses need to cool down quick. The resting body temperature of a horse is around 101 degrees. After the race it can easily reach a steamy 108. Traditional horse cooling consists of six water buckets, six volunteers, and a petrified horse.

To cool and calm the big athletes, IceHorse developed the XC Cross Country Cooling unit for Olympic competition. The XC consists of an old-fashioned fifty-gallon cooler and a 12-volt-battery-powered submersible pump. Water is sent through two 18-inch wands with holes distributed throughout the metallic shaft. The result is an even dispersion of ice-cold water along the length of the horse, manageable by just a two-person team. While simple, the ability to cover the entire horse, eliminate the chaos of dumping buckets, and limit the amount of people has paid dividends.

“Anecdotally, what we have seen is that these horses are much calmer because there’s less commotion,” said Dumbrell.

The XC sells for a bargain price of $595, with a portion of the proceeds benefiting the research department of the U.S. Eventing Association. In jumping and dressage events (pronounce it like you’re French: dressahge), the workout is shorter but rough on the horse’s legs. Since the XC isn’t appropriate for post-jump cooldowns, IceHorse provides an alternative system that focuses cooling between the knee and ankle, using leg wraps that would make Olivia Newton-John jealous. For London 2012, maybe Nike can modify its fancy cooling vest to fit a horse?

Back In The Saddle

Apparently getting in the saddle isn’t what it used to be. Saddle fitting is a complicated process customized to each individual horse. While saddles still maintain the traditional leather exterior, the old-style wool packing underneath has been replaced in part by high-density foam. Some in the sport aren’t so excited.

“I’m not that fond of it,” said Doug Hannum, equine therapist and trainer for the U.S. Equestrian team. “With the foam saddle you can’t adjust the panels. I can always shift the wool to make it fit the back.”

And what happens if the saddle doesn’t appropriately fit the back? “You have a very sore horse,” laughed Bannum.

This is it. This is the last Nike shoe we’re profiling. But, come on, how often can you write about an equestrian shoe? The Nike Ippeas (Greek for “rider”) is a replacement for the traditional leather boots with wood soles that riders have used for hundreds of years. The Ippeas maintains the traditional aesthetic (even the swoosh is small) but features a few improvements. The most noticeable is the titanium screw-in spur system that eliminates the need for any additional hardware. The full-length zipper makes the boot easier to take off, while abrasive rubber on the inside of the boot provides better grip on both the horse and the saddle.