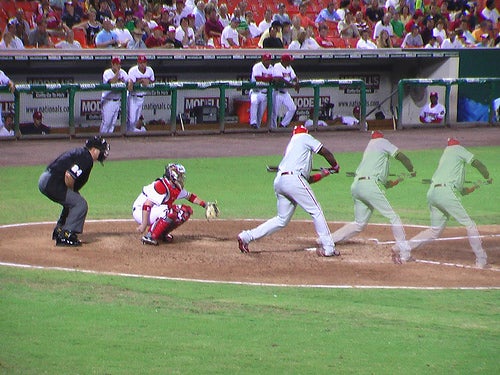 Can’t say we didn’t try. When we saw the proposed instant replay plan for Major League Baseball in June we pleaded with Bud Selig to reconsider. Heck, we even gave him a blueprint for how to get it right. Apparently, Bud wasn’t listening. As of this Thursday, MLB will implement its weak excuse for instant replay.

“Like everything else in life, there are times that you have to make an adjustment,” baseball commissioner Bud Selig said following Tuesday’s announcement. “My opposition to unlimited instant replay is still very much in play. I really think that the game has prospered for well over a century now doing things the way we did it.”

That opposition he refers to means replay will only be used on home runs. Bud. Bud. Bud. That’s like giving a 16 year old kid a new car and telling him to keep it below 20 mph. And why is a solo home run more important than a triple that scores three runs? There’s honestly little logic and not much Bud got right here. The system is starting just 30 games before the end of the season with little time for adjustment. For some idiotic reason reviews will be viewed in some war room at MLB headquarters rather than on the actual field. And, instead of empowering managers to protest a là the successful NFL system, umpires will have the only protest button.

“I’d love to be able to throw a red hankie or a green hankie. Imagine being able to throw something on the field and not be ejected,” said Chicago Cubs Manager Lou Pinella. “I shouldn’t say it’s not going to work, but this could turn into a little bit of a fiasco initially.”

Yes, Lou, we believe it might. To add to that chaos, we’re encouraging fans to bring their own red ‘hankies’ to the game and gently toss them on the field anytime there’s a play where replay should have been used. Apparently Bud wasn’t listening but maybe he’ll be watching.