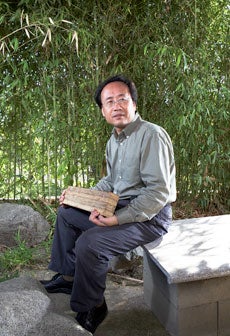 As a child growing up in northern China, Yan Xiao loved flying kites. A born engineer, he made them himself out of paper sails and plain bamboo frames. The kites were durable and cheap. Xiao left China at age 22 to study civil engineering in Japan and the U.S. but returned as a visiting professor at Hunan University in 2002. On a trip to the region’s vast bamboo forests, the memory of those kites gave the 47-year-old Xiao a flash of inspiration: Bamboo was strong enough for kites, but he suspected that it could be fortified to make even sturdier things, like bridges and houses.

Xiao, now an engineering professor at the University of Southern California, scoured textbooks and the Internet, hoping to find historical precedent for structural bamboo. His research had urgency. Most of China has been stripped of timber-worthy trees, so rural buildings are often made of shoddy concrete, which is exactly what led to the catastrophic school collapses during the earthquakes in Sichuan province in May. What Xiao found wasn’t terribly useful: a wealth of arty one-off projects, but nothing a contractor could ever build with.

Bamboo is a remarkable material. Some species have stalks as dense as hardwood. It’s the world’s fastest-growing woody plant, and it’s an exceptionally good absorber of carbon. But its irregular, knotty form is a problem. Making a reliable bamboo structure used to mean picking through stalks to find the ones that met precise measurements. Timber, on the other hand, can be cut to standard sizes. So Xiao set about developing a process to transform bamboo strips into easy-to-manage beams [see “The Sustainable Bridge”]. In 2006 he devised GluBam, bamboo timber sturdy enough for beams and trusses. Last winter, he returned to China and, using just an eight-man crew and no machinery, built a 33-foot GluBam bridge capable of supporting eight tons in the remote, ramshackle Hunan province town of Leiyang. The feat was so surprising, it was covered on China’s national news.

Since then, Xiao has been busy building GluBam houses and classrooms in parts of Sichuan leveled by earthquakes. But he hopes that GluBam’s most positive effect might be an overhaul of the bamboo industry itself. China produces up to a third of the world’s bamboo—Hunan a quarter of that output—but much of it goes to low-value, barely profitable uses, such as concrete molds and chopsticks. GluBam could spark a dynamic industry in China and provide a sustainable replacement for current forestry operations worldwide. “That was the intent all along,” Xiao says. “This could open a vast market. It could create a whole new source of money and jobs.”

Read more about GluBam Construction here, where you can also check out all of Best of What’s New 2008.