Dropping the Big One 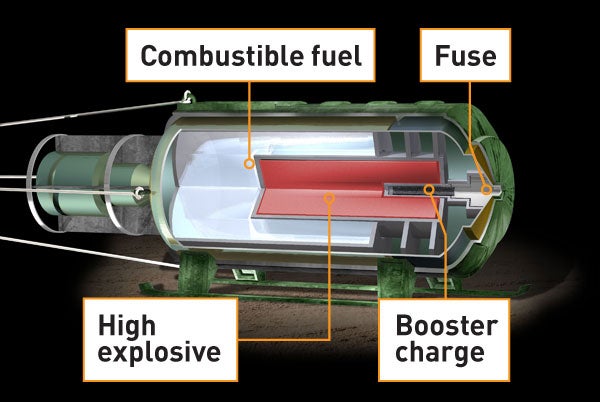 A computerized fuse clocks the decreasing altitude of the bomb and ignites at a predetermined height, setting off a chain of blasts

This fall, while military analysts were wringing their hands over North Korea and Iran, Russia momentarily stole the spotlight, detonating what its military claimed was the world’s largest-ever non-nuke: an eight-ton fuel-air explosive purportedly four times as powerful as America’s Massive-Ordnance Air Blast, the previous record holder. Russian TV aired the test blast on September 11.

Fuel-air weapons work by releasing and igniting a blooming cloud of explosive material. Unlike conventional bombs, the weapons generate sustained shock waves that can propagate outward up to 990 feet, inflicting damage far beyond the central area of impact. The footage showed a giant explosion that flattened a building within seconds. (Check out the video below.)

Explosives engineer Jerome Stofleth of Sandia National Laboratories calls the fuel-air bomb a specialty weapon, excellent at collapsing tunnels and bunkers because its shock waves can easily penetrate small spaces. But fuel-air weapons have a few serious drawbacks that limit their potential usefulness on the battlefield. First, they are notoriously difficult to build. “It’s more of an art than a science to get the right concentration of fuel and air,” says Van Romero, a weapons expert at New Mexico Tech. What’s more, wind can blow away the fuel cloud before it ignites, leaving the target unharmed. And explosives inside the weapon, often magnesium and isopropyl nitrate, can be unstable, giving the bomb an impossibly short shelf life (in some cases, days compared with decades for a TNT bomb).

So while Russia touts the size of its new weapon, military experts are more concerned over whether the Russians have managed to make it reliable. Their formulation is unknown, but “if they have figured out a way to perfect it and can repeat it when they want,” Romero notes, “it could be a devastating weapon.”

Inside the Biggest Non-Nuke Explosion

1. An aircraft carrying a fuel-air bomb in its weapons bay flies over its target.

2. The crew releases a bomb out of the cargo hold. It descends under a parachute.

3. A computerized fuse clocks the decreasing altitude of the bomb and ignites at a predetermined height, setting off a chain of blasts.

4. A “booster” explodes inside the warhead, igniting explosive material and expelling air-combustible fuel.

6. As the blast expands, turbulent jets at the edge of the fireball mix the uncombusted fuel with surrounding air, igniting it.

7. The burning fuel in the jets further heats the fireball and sends a huge shock wave sweeping outward at 6,700 mph, flattening everything in its path. Those not killed by the initial blast can suffer blindness, hearing loss and internal organ failure, among other injuries.

8. The wave leaves a vacuum in its wake that sucks up air and debris and creates a mushroom cloud. The entire process takes just seconds.