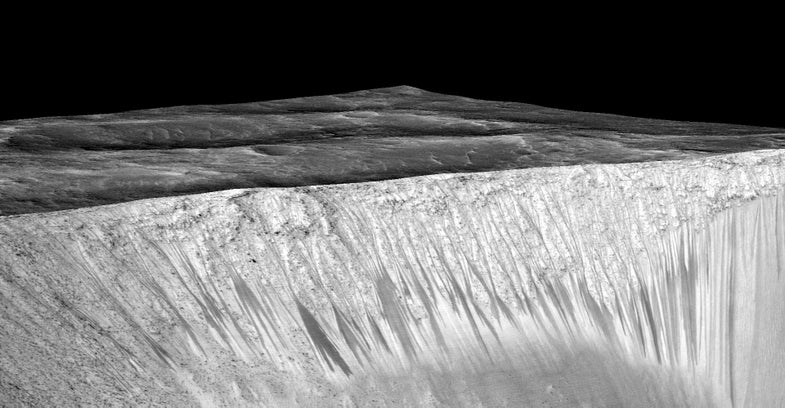 With an average temperature of minus 67 degrees Fahrenheit, Mars would seem too cold to have liquid water on its surface. But in June 2000, scientists noticed dark streaks that stretch down Mars’ slopes every spring. Scientists aren’t sure how those dark streaks got there, but the leading theory is that they come from melting ice running down the slopes (in liquid form thanks to high levels of dissolved salt), but it was mysterious how small trickles of water could move so much sediment.

Now a team of researchers thinks they have an answer: The water isn’t just liquid–it’s boiling.

Although the frigid red planet never reaches the 212 degrees Fahrenheit required for water to boil in Earth’s atmosphere, Mars’s air pressure is much lower than ours, and so is the boiling point of water there.

In a “Mars Chamber” in their laboratory, a team led by French researchers took a block of ice and set it on top of a slope of loose sand, then exposed it to the low pressures experienced on Mars. Under Earthlike air pressures, the ice block just melted and flowed down the slope in a slow spreading stain. But the block in the Mars chamber boiled and carved out channels, showing that in a Mars-like atmosphere, a small amount of bubbling water can move large amounts of sand.

The experiment was limited in that it couldn’t match Mars’ frigid temperatures and low gravity. However, scientists have suspected since 2000 that boiling water could be behind the streaks (called recurring slope lineae), and this study provides the first experimental support for the idea.

While the results support the idea that the lineae are indeed caused by running water (as opposed to, say, sediment avalanches), they also suggest that the process requires less water than expected, and that the liquid water is short-lived. That, in turn, could mean that the odds of finding life in that region have gotten a little longer.