Stop blaming blue light for all your problems

It’s not quite the enemy. 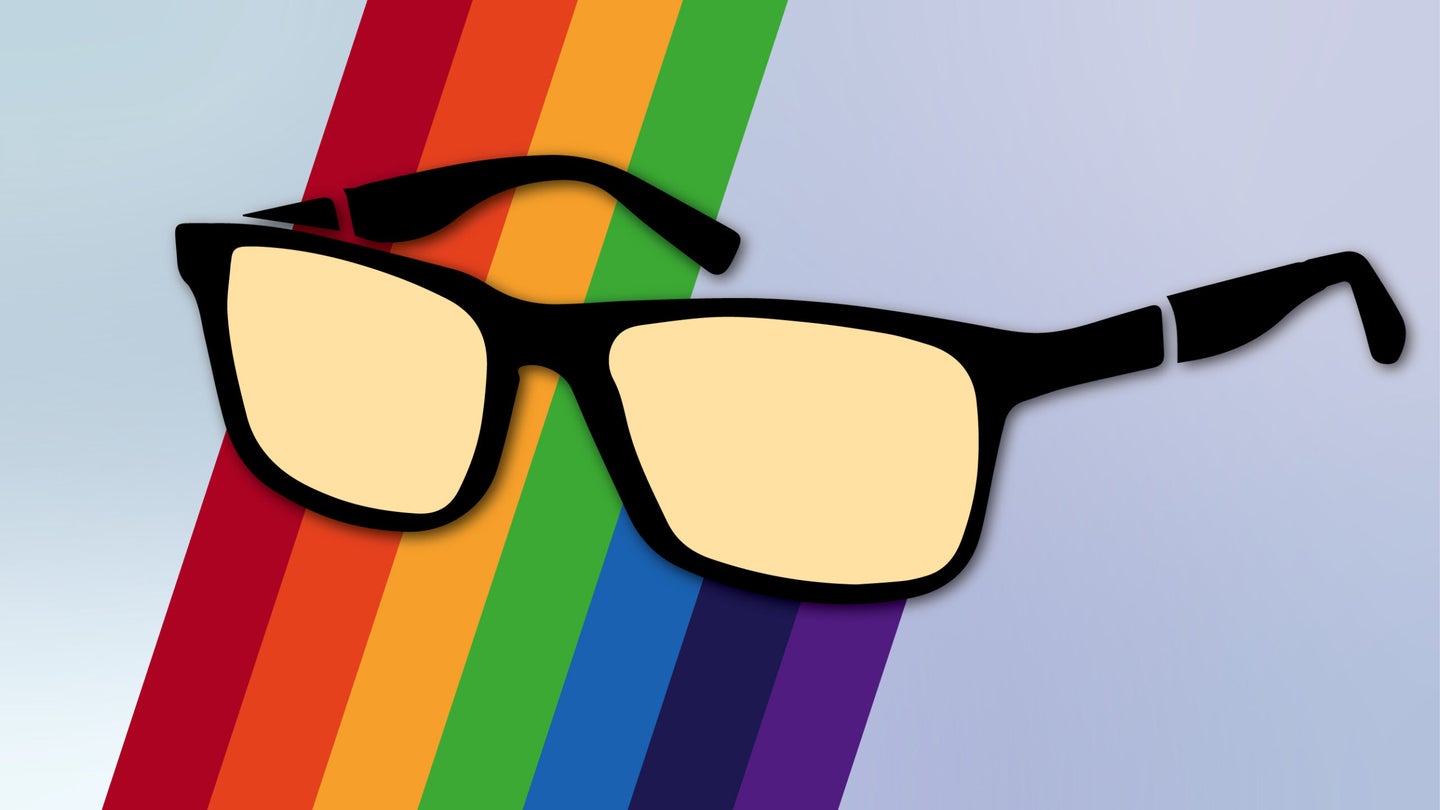 The latest trend in eyewear is actually to see less—by filtering out certain parts of the visible light spectrum, particularly blue light. Countless brands offer supposed blue light-blocking glasses, mainly to folks who spend most of their days looking at screens. These products are cheap and you can even get them without a prescription, though at some eyewear outlets you can opt to have this coating added to your prescription lenses. Whatever the method, these glasses bank on the idea that blue light is harmful to our eyes. The only problem is, no one’s really sure that’s true.

Blue light, which makes up the highest-energy portion of the visible light spectrum, has shorter wavelengths than low-energy red light. These two wavelengths, and everything in between, is what the human eye can register as color. But there’s a lot more light beyond this spectrum that we can’t see. Ultraviolet (UV) radiation, for example, exists past the blue end of the spectrum, and is known to cause some nasty eye conditions like cataracts and macular degeneration with overexposure—that’s why we wear sunglasses when we’re outside.

“The concern with blue light has really gotten to another level,” says Sunir Garg, a clinical spokesperson for the American Academy of Ophthalmology. “I honestly don’t know how this became such a big thing,” Garg says, “because it’s not the ophthalmologist community that’s been driving the conversation.” He attributes this mostly to the ever-increasing time we spend on screened devices, whose LEDs emit mostly blue wavelengths. But blue light isn’t some new dystopian phenomenon causing us to go blind.

“It’s been around since the sun has been around,” Garg says, adding that we’re exposed to way more blue light from the fiery ball in the sky than from our screens.

In fact, humans need this light to survive. It regulates the body’s circadian rhythm, improves cognitive function, and elevates mood. It’s nature’s surefire method for keeping us awake and happy.

Specialized eyewear companies and unverified medical threads alike point to studies showing that blue light can cause damage to retinal cells, as this light is not naturally filtered out by the cornea. They found that exposure to blue light was associated with the formation of oxygen free radicals, which are toxic byproducts of cell stress and damage.

But Garg points out that these studies were done either on individual cells in a petri dish or lab animals using intensities and durations of blue light exposure that are far beyond what humans experience on a day-to-day basis. Because clinical trials haven’t been done on humans, we can’t say for certain that blue light is really a problem.

“There is no clinical sign or clinical evidence that people are being harmed by this,” Garg says of the claims that blue light can damage our eyeballs.

While it’s true that staring at a screen all day can result in eye strain and dryness, it’s not because of blue light. Instead, the staring causes your eye muscles to tighten, and infrequent blinking can dry them out. The American Academy of Ophthalmology recommends eye drops and the 20-20-20 rule: Every 20 minutes, stare at an object at least 20 feet away from you for 20 seconds to give your eye muscles a break.

If people are concerned about serious eye conditions, Garg says there are many other factors to consider before blue light exposure.

“Smoking increases the risk of macular degeneration, and we have great data on that—nobody really talks about that. Exercise and eating a proper diet reduces your risk for vision loss as you get older—nobody talks about that,” Garg says. “And that’s good data and good science.”

Garg does, however, give some merit to the claim that blue light exposure at the wrong times could negatively affect sleep. Sabra Abbott, assistant professor of neurology and sleep medicine at Northwestern University’s Feinberg School of Medicine, agrees. She says light is one the strongest nudges to our circadian rhythm, our internal clock that tells us when to sleep. Most humans’ cycles run a little longer than our 24-hour day, so waking up to “blue” sunlight in the morning can help set us back on track.

Throughout the day, sunlight works to keep us awake by suppressing the body’s production of melatonin, the sleep hormone. When exposed to that light, photoreceptors in our eyes send signals to the brain to hold off on synthesizing this hormone. When those photoreceptors begin to detect less light at the end of the day, they give the brain the go-ahead, and melatonin races through the bloodstream to let the body know it’s getting dark again.

Abbott says adding screens to that cycle can complicate things. Because they produce light at a blue wavelength similar to the sun, the eye’s photoreceptors can’t tell the difference. So, using a screen when it’s dark out will trick the body to continue suppressing the production of melatonin, making it harder to fall asleep and wake up the next morning.

But because melatonin production is most sensitive to blue wavelengths of light, some research shows that eliminating just these wavelengths using amber-colored glasses can improve sleep. Abbott points out that not all glasses are created equal, though: Some have yellow lenses, some have orange lenses, and some barely have a tint at all. And because they’re not regulated by the FDA, we don’t know which brands work better than others—or if they work at all.

And, while Abbott doesn’t discount the fact that a proper blue light filter could prevent unnecessary melatonin suppression, she says there’s a lot more that goes into sleep hygiene that a single pair of glasses won’t fix.

“It’s not as good as just not looking at the screen in general,” she says. This is especially true for people who spend their days in dim environments—this lack of contrast between light and dark can also negatively affect melatonin production.

“We could argue it’s actually more important to get lots of bright light during the day than it is to wear the glasses at night,” Abbott says, adding that while light exposure differs for each person, the goal should be to make it as easy as possible for your eyes to tell the difference between day and night. That definitely means not wearing blue light-blocking glasses during the day, or getting a blue light-filtering coating on glasses you typically wear during the day.

Abbott says she tells most of her patients to avoid screen use altogether before bed—even if they wear glasses that block blue light. And that’s for another reason that has nothing to do with wavelengths or circadian rhythms: Activities like answering emails will keep their brains active, leaving their minds unprepared for sleep. On top of bedtime behavior, even things like diet and physical activity can affect circadian rhythm.

But it’s that promise of a singular solution that may be driving this glasses fad, according to consumer psychologist Kit Yarrow. She studies why people buy what they buy, and she can see a clear reason for why people buy blue light-blocking glasses.

“We love the easy answer. We just love the idea that we can take a pill or put on a pair of glasses—just one simple thing, and our problem is solved,” Yarrow says. She also notes that the placebo effect can make people think a product is working, even when there’s no scientific evidence to suggest it.

She says this “easy fix” mentality drives the sales of all kinds of products, particularly diets. While there may not be studies proving the efficacy of a food regimen or eyewear, Yarrow says consumers’ hope of solving the problem transcends that lack of a foundation. And when an influential source like a celebrity or Instagram personality starts using that product, it’s all the excuse they need to jump on board.

“The problem to me is not necessarily the lack of sleep or the eye strain—the problem is the anxiety that causes the fixation on technology,” Yarrow says. To her, the popularity of a one-dimensional solution speaks to how concerned we are with our relationship to screens. Tired eyes and sleepless nights are just symptoms of that stress—and she doesn’t think that can be cured by a pair of glasses.

Regardless of the psychology behind them, blue light-blocking glasses have become de rigueur for conscious computer users far and wide. While there’s no evidence that they protect your retinas, there’s no evidence that they hurt them either—as for fixing your sleep schedule, Abbott says intentionally exposing yourself to less blue light during the day can confuse the systems in your body that produce melatonin, actually making it harder for you to fall asleep.

All in all, scientists don’t think we should fear blue light—we should instead be mindful of how much of it we get from screens. And while it may not be great for us at night, it’s certainly not out to get our eyeballs.