Proof we landed on the Moon is in the dust

A less common reply against Moon hoax theorists: the way dust behaves in Apollo videos is proof we landed on the Moon. 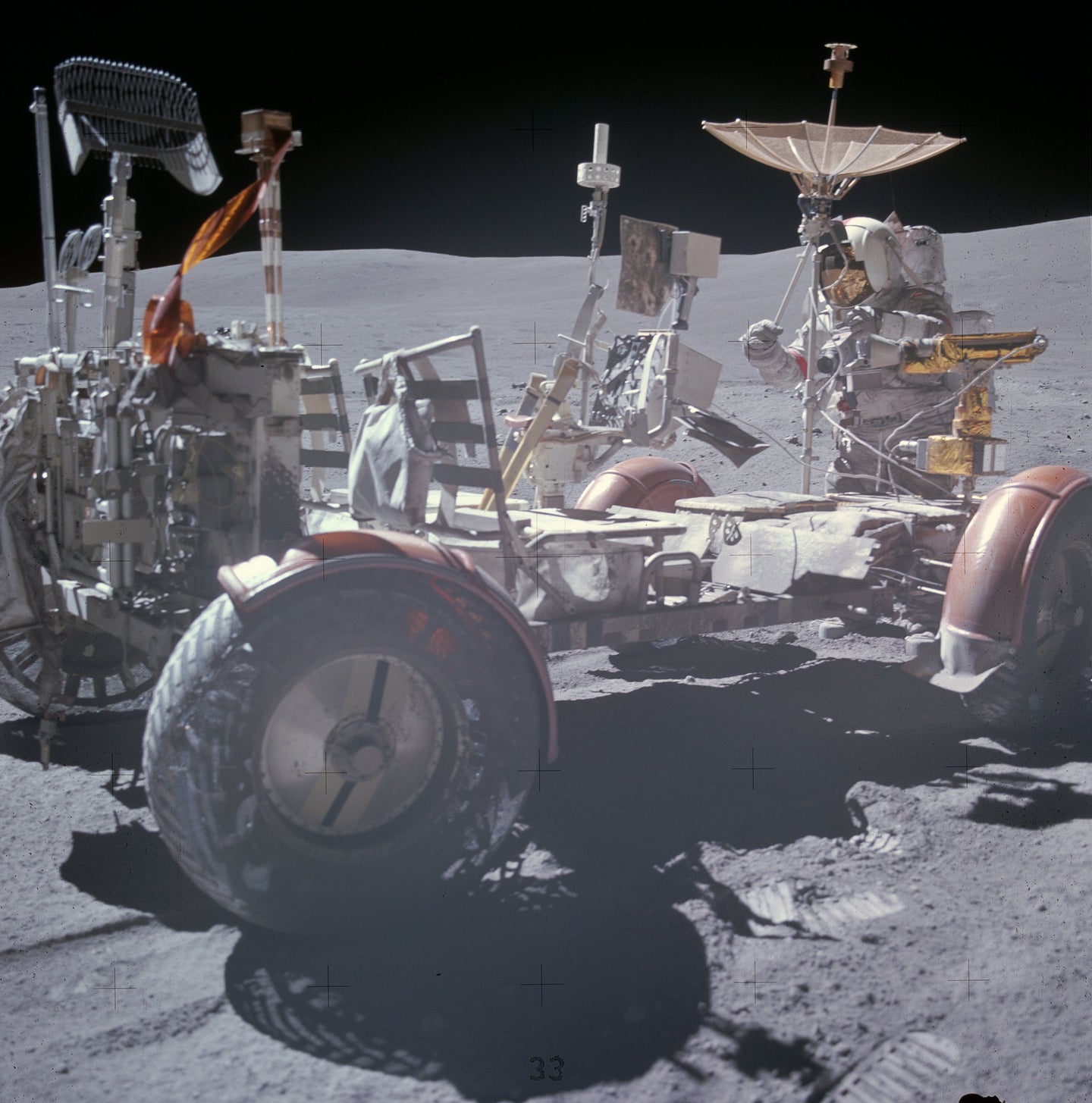 On every anniversary of Apollo 11’s lunar landing, the Moon hoax theorists are out in full force. And while scientists have refuted the hoaxers most common arguments like how the Apollo flags apparently wave in a vacuum, there’s one interesting way to prove that we did in fact land on the Moon that we don’t see all that often: the movement of dust kicked up by the lunar rover on Apollo 16.

Apollo 16 was the second Apollo mission to take a lunar rover to Moon. In April of 1972, Commander John Young and Lunar Module Pilot Charlie Duke spent a little more than 20 hours exploring the Moon’s Descartes region. The rover allowed them to cover more ground than they would have been able to on foot, and also gave them a unique off-roading experience. Among the pictures and videos taken on the flight is one famous clip shot by Duke of Young driving the rover at top speed, kicking up regolith (or moon dust) in his wake. This is the “Grand Prix.” But more than just making every Earth-bound human intensely jealous, the video offers interesting evidence that we did in fact land on the Moon.

The key is the trajectory of the dust as it flies up behind the lunar rover. That’s what Hsiang-Wen Hsu and Mihály Horányi, two scientists at the Laboratory of Atmospheric and Space Physics at the University of Colorado, Boulder, studied.

Hsu and Horányi started by breaking apart the footage of Apollo 16’s Grand Prix into individual images such that each image corresponded to one frame of the video. From those images they chose two series that showed the rover driving at a constant rate and at a right angle relative to the camera. This gave them as close to a two dimensional plane as possible, turning the task of tracking dust into a simple matter of plotting the dust’s movement against two axes rooted at the rover’s rear fender. The horizontal axis extending behind the rover represented velocity and the axis extending vertically from the fender represented height.

Because the dust in the images is so fine it was impossible to track any individual grains. Instead, they used the top of the dust cloud as their marker. Tracking the movement of the dust cloud clearly shows characteristic rooster tails and not the simple parabolic arc of a dust cloud we would see produced by a rover driving through, say, dust on Earth. This specific rooster tail shape is contingent on the lunar environment: the initial velocity of dust particles based on the rover’s speed, the gravitational field strength that is one-sixth what we have on Earth, and the complete lack of air resistance because the Moon has no appreciable atmosphere. Turning this visual data in to formulas allowed Hsu and Horányi to plot the movement of dust on a graph, turning the Grand Prix’s rooster tails into a mathematical visualization.

So here’s where this gets really interesting. Hsu and Horányi didn’t stop after tracing the movement of lunar dust particles. They used the same formulas to plot the trajectories of dust particles on Earth, taking into account air resistance. And because air resistance affects particles of difference sizes so drastically, they took two values for their Earthly dust for good measure.

The two scientists plotted the movement of four particles on one graph, two in a lunar environment (the solid lines) and two in an Earthly environment (the dotted lines). The graph shows that in any environment the particles begin with the same initial velocity but their ballistic paths are very different. Air resistance on Earth drags particles down fairly quickly whereas on the Moon the lack of air resistance gives particles a longer trajectory.

Hsu and Horányi’s results, specifically the lack of particles’ deceleration along the x-axis of their coordinate system, could only be the case if Apollo 16’s rover footage was filmed in a vacuum. A vacuum like you’d find on the lunar surface, for example, which couldn’t exist on a sound stage on Earth.

_Speaking of lunar landings, I am currently “live” tweeting Apollo 11’s mission, and the lunar landing is coming up this afternoon around 4pm EST with the EVA happening about three hours later. Follow me — @astVintageSpace — for blow by blow updates on the flight! _

_Source: Hsu and Horányi, “Ballistic motion of dust particles in the Lunar Roving Vehicle dust trails” American Journal of Physics, vol. 80, No. 5. A huge thanks to Mihály Horányi, who I met almost two years ago at UC Boulder LASP’s New Media Workshop, for sending me this paper. It took me a while, but I finally wrote this article! _