On April 28, 1945, a small cohort of Americans arrived in London on a C-54 transport aircraft. They were dressed … Continued 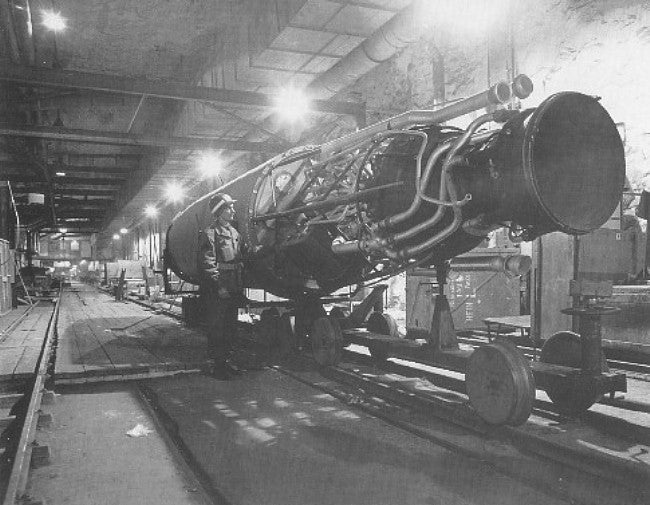 On April 28, 1945, a small cohort of Americans arrived in London on a C-54 transport aircraft. They were dressed in military uniforms and bore the ranks of Colonel and General, but none were military officers. Their uniforms were costumes designed to expedite their travel into an area where the final battles of the Second World War still raged. Together they made up the Army Air Force’s Scientific Advisory Group, and their purpose in Europe was to learn first hand about the Germans’ most notable technological and scientific weapons. As the scientists uncovered hidden documents, explored abandoned laboratories, and interviewed captured engineers, they realized not only that the Germans’ weapons were far more advanced than their own, the country had not one but two systems under development that could bomb the United States from Europe. 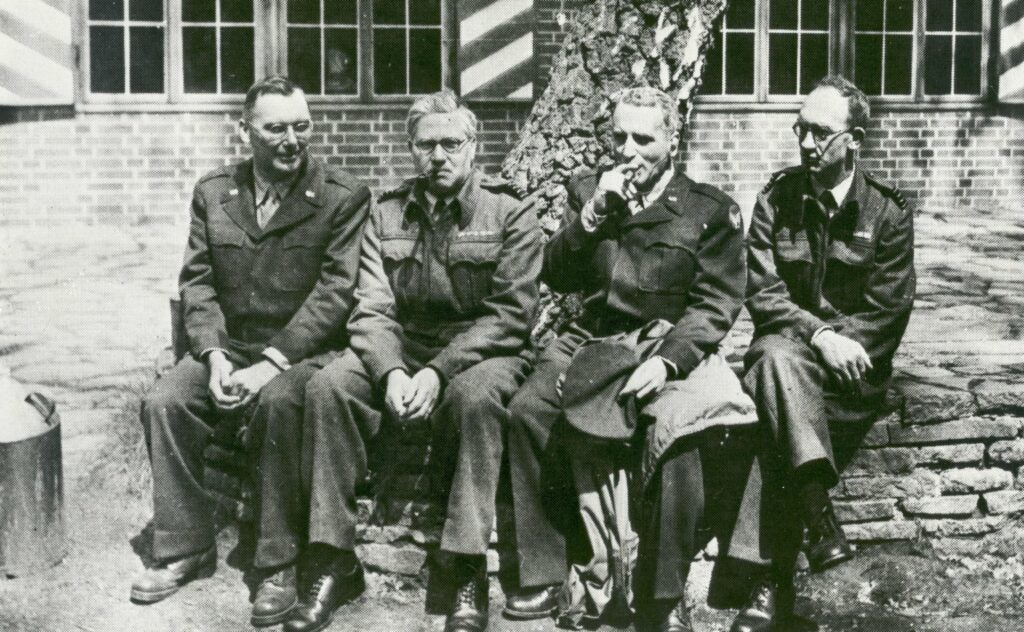 Among the most outstanding technological achievements of the Second World War was the V-2, the guided missile launched primarily on London by the Nazis in the closing months of the war. Its success was due in large part to men that brought it to life. Working under Walter Dornberger and Wernher von Braun, the V-2 team brought together the best aerodynamicists, structural engineers, electronics specialists, servomechanics engineers, and control and propulsion experts Germany had to offer.

While the V-2 might have been the most advanced rocket launched during the war, it was far from its design team’s most powerful product.

Properly known as the A-4 or Aggregate 4 — it was renamed Vegeltungswaffe Zwei or Vengeance Weapon 2 by the Nazi propaganda ministry — the V-2 was part of the A-series of vertically launched guided missiles. The series began with the A-1, which, along with the A-2, was a fairly simple proof of concept rocket. The A-3 and A-5 were larger missiles both designed to work out all the technological kinks leading up to the A-4, the first combat ready rocket.

These rockets were all sleek with rear fins for stability, but beginning with the A-6 the style changed. Wind tunnel models and drawings the American scientists found revealed winged A-series rockets under development. The A-6, A-7, and A-8 were all unbuilt design studies. The A-9 and the A-10 were two long range bombers designed to reach the United States, and they were sometimes referred to as the Amerika Bomber.

The A-9 was a winged version of the V-2. The A-10 was a more menacing weapon consisting of an an A-9 on top of an 85 ton booster rocket. The booster was capable of generating 200 tons of thrust for a launch speed of 3,600 feet per second. The A-9’s would then act as a second stage, firing its own rocket engine to increase the payload’s velocity to 8,600 feet per second. Tearing through the upper atmosphere, this two-stage launch system could send a warhead 3,000 miles from its launch point, roughly the distance between a western European launch site and a major city on America’s east coast.

More menacing, perhaps, were the A-9 variants that allowed for a pilot to ride inside the missile. Manned, the A-9/A-10 would become a precision bomber, and it wasn’t the only such design to come out of Germany during the Second World War. Another engineer named Eugen Sänger had developed a different though similar manned antipodal bombing system.

The antipodal bomber shared some basic similarities with the A-9/A-10. It was also a winged, rocket-driven design that used a powerful engine to reach high speeds and altitudes on its way to a target. But that’s about where the similarities end. There was no unmanned version of Sänger’s bomber, and because there was a pilot on board the vehicle was designed to land safely after every mission.

The key behind Sänger’s system was the bomber’s aerodynamic design. Just over 90 feet long with a wingspan measuring a little under 50 feet, it was ogival in shape (cylindrical and curving to a point at the front end like the space shuttle’s external fuel tank) with a flat bottom and small wings. The bulk of the bomber’s body was filled with fuel and oxidizer tanks as well as the necessary plumbing to feed both to the rocket engine. Its other features were a central bomb bay and a foreword pressurized cabin large enough for a single pilot. For landings, the bomber featured a retractable nose and landing gear as well as rear skids for increased friction on touchdown.

Because the onboard fuel stores were limited and the potential bombing targets thousands of miles away, Sänger designed his system such that it expended no fuel at launch. The bomber was designed to launch from a catapult on the ground. An array of von Braun’s V-2 rockets would propel a sled along a lubricated track reaching a top speed of 1,640 feet per second. By the end of the track, the bomber would have gained enough velocity to launch into the sky. Once clear of the catapult, the pilot would ignite his rocket engine and shoot on an arcing path into the upper stratosphere.

The powered portion of the flight would end when the fuel was exhausted. At this point, aerodynamics would become the pilot’s chief ally. With the vehicle in the right orientation, the bomber would hit the thicker lower level of the atmosphere with its flat bottom as it lost altitude, then skip back upwards like a stone skips on a calm pond. Skipping off the atmosphere like this, the bomber would develop an oscillating gliding flight path as it slowly lost altitude. The pilot, meanwhile, would be in control of the vehicle throughout its slow descent, maneuvering it towards his target. At a precalculated point, he would release his bomb. 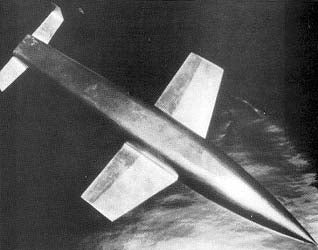 Sänger allowed for a number of different mission configurations depending on the type of bombing and the target’s distance from the launch point. In essence, there were two main types of attack: point attack bombing or area bombing. Point attack was a precision technique that had the pilot release his bomb from a moderate altitude while flying at a moderate speed. Timed right, a precision bombing attack could destroy a bridge, a building, and even block off the entrance to a tunnel. Area bombing was designed to destroy a larger swath of land like a city or a rural neighbourhood. Area attacks had the pilot drop his bomb from altitudes as high as 100 miles while flying at a much faster speeds. The increased force of a bomb falling from such a great height offset the lack of precision.

After dropping his bomb, there were a few ways for the pilot to get himself back to a safe location. The simplest flight path had the pilot continue around the globe, gliding increasingly lower until he arrived back at his launch site. If the target were such that the pilot couldn’t continue in a straight path, he could turn around and fly back to his landing site. Of course, turning profiles mean a signifiant loss of energy; the pilot could lose enough altitude that returning to his launch site would be impossible. In this case, Sänger offered the simple solution of setting up an an auxiliary landing site. There was also a flight profile that had the pilot conserve some fuel for an engine relight after dropping his bomb; he could propel himself away from the target site before carrying out the same slow gliding landing at a safe location.

In the rare case where a bombing target was too far from the launch site for the bomber to return at all, Sänger proposed sacrificing the vehicle. The pilot could eject and land by parachute in friendly territory and leave the bomber to crash in enemy territory.

Von Braun’s manned bomber never flew. One version of the A-9 called the A-4b was built. It was in essence an enlarged V-2 with sweptback wings spanning 18.5 feet and enlarged tail fins. Two A-9s were test launched, one on the 8th and one on the 24th of January, 1945. The first failed but the second was more successful, demonstrating the feasibility of an unmanned supersonic aircraft.

Sänger’s bomber came closer to flying, though not out of Germany. In 1944, Sänger detailed his vehicle in a report titled “A Rocket Drive for Long Range Bombers.” A copy of the report ended up in Walter Dornberger’s hands, and in 1952, while living in the United States, he pitched the bomber to the US Air Force. The project came to life in 1957 and enjoyed a short existence as the ill-fated US Air Force-NASA joint Dyna-Soar program. It was cancelled in 1962 without ever leaving the ground.