As expected this flu season, the media is rife with regaling reports on influenza virus and that hygiene and vaccination... 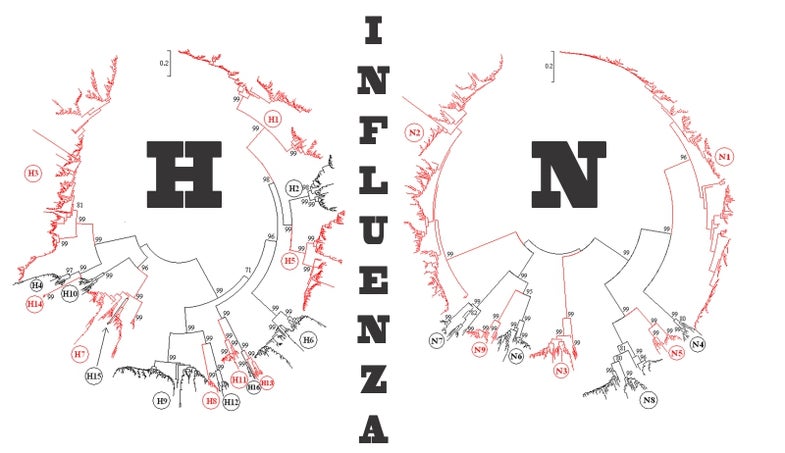 As expected this flu season, the media is rife with regaling reports on influenza virus and that hygiene and vaccination are critical to avoid infection. In most years, there are only one or two types worth mentioning, namely H1N1 and H3N2. This year, however, reports of a variety of viruses, including H5N1, H6N1, H7N9, H9N2, and H10N8, have led to both confusion and concern. With so many H’s and N’s, it’s hard to get an idea as to what is emerging and which, if any, pose any real threat to public health.

Ironically, this classification conundrum is the result of an attempt to clarify influenzavirus nomenclature. Back in 1980, the World Health Organization realized that unlike most viruses, which may have only a handful of different types, influenzaviruses were incredibly diverse. Over a period of a decade, researchers and public health officials worked tirelessly highlight the most useful identifiers of the virus’ biology and ensure that it was easy to share with all researchers, regardless of country or language.

The team eventually learned that of the three major types – A, B and C – only A required further categorization into subtypes. The most important components within the A viruses were those that were involved in the initiation of infection and as such were determined to be the basis for classification. These two proteins were hemagglutinin (H) and neuraminidase (N). As it stands now, there are sixteen H’s and nine N’s. Each H/N combination refers to a subtype of virus with its own individual properties at the molecular level.

Every subtype has its own host species, including pigs, horses, dogs, cats, seals, and even a whale. Yet, the majority infects only avian species. In terms of human infection, there were only three major H’s and two N’s that were thought to infect humans. These were H1N1, H2N2 and H3N2. All were known to be seasonal influenza virus strains and all three had been implicated in the three global flu pandemics. The H1N1 virus caused the pandemics of 1918 and 2009; H2N2 was involved in 1957; and H3N2 in 1968. There had been the occasional infection with a different subtype but for the most part, there was little attention paid.

But that all changed in 1997 with the identification of a once-thought strictly avian subtype, H5N1, as the cause of infection and death in a group of individuals in Hong Kong. While the outbreak was small and only a few people died (though 33% mortality is hundreds of times greater than seasonal flu), the door was officially opened to the possibility that even more H’s and N’s might find their way into the human population. Worse was the potential that such an introduction could lead to a massive pandemic. Though that has yet to happen – and may never come to pass – the mortality rate has continued to climb and now stands at nearly 60%.

With H5N1 already scaring up attention, researchers went on the hunt to identify other possible avian strains that could pose a similar threat. It wasn’t long before other subtypes were identified as having the potential to infect humans. These included:

The majority of these cases are limited to Southeast Asia and in particular, China. However, as seen in the recent case of H5N1 in Canada, the potential is always present.

As to what all this means for the future of public health, there are no easy answers. While the appearance of new, emerging and classic flu subtypes will likely never cease, there is hope that one day there may be little to no concern. In a twist of microbial fate, the identification of all these different viruses has provided researchers with the ability to find common ground at the molecular level. With enough similarity, there is hope a universal vaccine may be possible within the next decade.

Despite all of the mentions and resultant concern, there is no need for panic. Public health officials have a good grasp on the influenza situation and have been able to stem any outbreaks long before they could pose any significant threat. While the mention of these newer strains and names may appear to be fear-inducing, they are not; information sharing is always better than silence.

Indeed, if there is a need for concern, it would have to be not for H5N1, H7N9 or H9N2, but for the standard, traditional, run of the mill H1N1, which is this year’s predominately circulating virus. In that regard, though it may sound like a broken record, when it comes to staying safe, there is nothing better to prevent its punch than to stick with proper hygiene and of course, for those who qualify, get that vaccine.