The Tale of the Travelling Toxigenic E. coli

Along with humans, microbes have a certain knack for worldwide travel. Some, like tuberculosis are well known to hitch a... 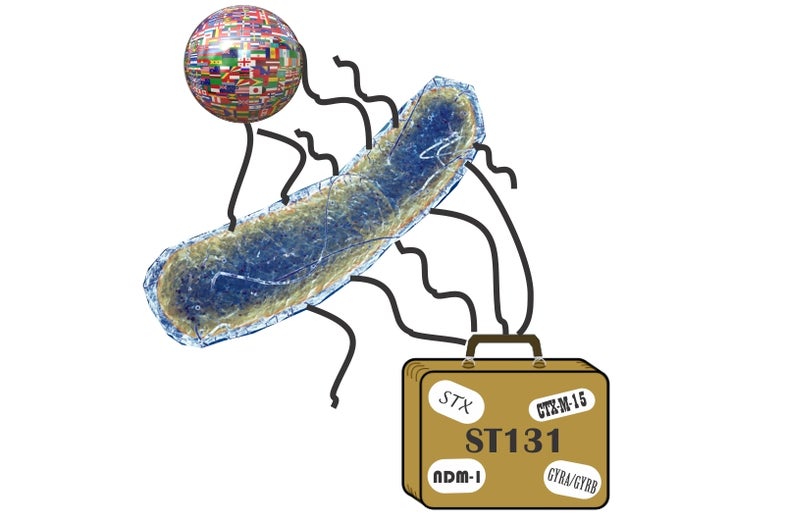 Along with humans, microbes have a certain knack for worldwide travel. Some, like tuberculosis are well known to hitch a ride in unsuspecting individuals and find a home in faraway lands. Others, including the media-attention grabbing Ebola, are usually more comfortable in localized areas though they too have the ability to span across thousands of miles. Then there is E. coli, which can easily travel in humans, animals and agriculture to establish endemicity almost anywhere on earth.

Normally, E. coli is a harmless bacterium but within their ranks are a number of illness-causing strains. The most renowned is the infamous O157:H7, although others have made their names as villainous vacationers. In 2011, O104:H4 made headlines as it spread from Germany all across Europe and into North America. Then there is O25:H4-ST131, which hasn’t been given much broadcast time but has slowly worked its way around the world. In the process, it has become one of, if not the most important cause of antimicrobial-resistant E. coli infections.

This type of spread is not hard to comprehend. The bacterium can live happily in biological environments, such the human gut. Once excreted, the bacterium finds its way into the watershed, soil, animals and eventually the food and water supply where another human will ingest it and restart the cycle. Add in a travel component, whether human or agricultural, and worldwide prevalence becomes easy to foresee.

But, a hurdle lies within this simplistic analysis. With every stop on the worldwide tour, the bacterium tends to pick up souvenirs; pieces of genetic code allowing for new functions. The most worrisome of these are elements conferring antibiotic resistance and/or increased illness in infected individuals. With each pickup, the bacterium grows stronger and more difficult to treat.

Although science understands the nature of phenomenon, the mechanism associated with travel and virulence has not been given much study. Sadly, this has given ST131 the opportunity to pick up several genes including CTX-M-15, NDM-1, and GYRA/GYRB. Respectively, they are responsible for nullifying our ability to use penicillins, carbapenems and one of the last options, fluoroquinolones.

How this one strain of bacteria could possibly travel the world, pick up these resistance genes, and essentially stay under the radar of public health officials is a mystery. A retrospective analysis of the bacterium has revealed a number of different minor outbreaks, each of which infected no more than a few dozen at a time. Although this would lead to some interest at the academic level, the numbers simply were not high enough to justify any significant public attention. Even more interesting was the association between time and the acquisition of elements. Much like the stickers on a piece of luggage, the number of elements grew with time and place of visit.

The link between time and acquisition led the authors of the study to come up with a hypothesis. Perhaps the link was traceable. Much like following a family tree, by following ST131 back in time, they might be able to find its origin and perhaps how it managed to spread uncontrollably. This week, those authors and a series of other international researchers published their efforts.

The team tested samples taken from infected individuals over 11 years spread across six countries. They then examined the genetic code in order to find evolutions such as mutations, the loss of certain genetic elements, and those souvenirs of resistance and virulence. After all the analysis, they were able to conclude two significant findings. The first suggested the origin of the strain happened sometime before the year 2000, which is when their search began. The second revealed all ST131 strains worldwide were due to the same predecessor.

As theorized, the ST131 bacterium had essentially started off as a harmless member of the E. coli family. But with travel, it acquired a number of genetic elements, changed its genetic structure and became a different entity. As time went on and the number of miles travelled increased, the bacterium grew in its ability to cause infection and stick around in spite of various treatments. Today, it now stands as one of the most important pathogens for the future.

Unfortunately, the tale of ST131 is not unique. In 2014, the spread of infections is rampant and leading to a plethora of concerns. Bacteria aside, the dissemination of other pathogens, such as dengue, Chikungunya, leishmania, malaria, and even measles highlight our need for better surveillance and public information. We need to appreciate infections, like humans, like to travel and also collect those souvenirs. The difference, however; those souvenirs are not made for the mantle to collect dust. They are important determinants of our health and should be respected as such.