The Parallels Between The Budget Crisis and Healthcare Associated Infections

Over the last few weeks, the United States was gripped with a crisis that led to a government shutdown and … Continued 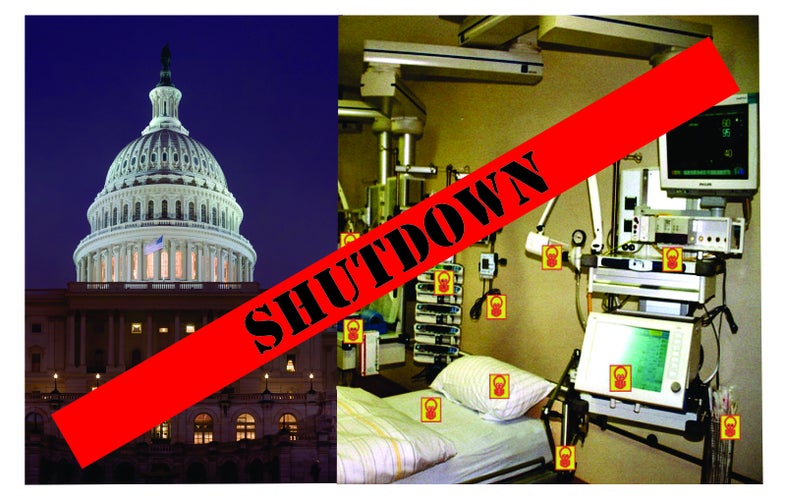 Over the last few weeks, the United States was gripped with a crisis that led to a government shutdown and a near default of the country’s debt. Although the overall impact of the event was averted through a last minute agreement, there has been no resolution to the problem that has so far cost some $24 billion dollars. While this drama may seem isolated to the political realm, there is a striking similarity to an unfortunate occurrence in healthcare: infectious outbreaks. Better known as Healthcare Associated Infections (HAIs), these events are associated with an uncontrolled spread of a pathogen inside the walls of the institution.

The names of the main culprits behind this conumdrum are as well known as Social Security and Medicare, including C-Diff (Clostridium difficile), VRE (Vancomycin-Resistant Enterococci), MRSA (Methicillin-Resistant Staphylococcus aureus) and Norovirus. In addition, other newcomers, such as Acinetobacter baumannii and Carbapenem-Resistant Enterobacteriaceae (CRE) are making headlines in the same vein as Quantitative Easing and the Patient Protection and Affordable Care Act. These endemic issues of the medical state can lead to significant costs to control their spread and may require redistribution of resources or even outright shutdowns of wards and departments.

While the cost to quality of care is hard to enumerate, the actual fiscal costs are astounding. In a recent report, the direct and indirect costs of acute care associated HAIs – which may be significantly underreported – have been estimated at between $96 and 147 billion dollars annually in the United States alone.

But unlike government, which may encounter these heightened states of concern at most a few times a year, the predicament of HAIs has been a continuous concern of healthcare for centuries. As far back as the 1700s, HAIs had been recorded as being a significant cause of illness and death. More intriguing than this is that around the same time, they were considered to be a preventable event.

In 1742, Sir John Pringle, a physician, was tasked with logging the problems associated with military life. It resulted in the book, _[Observations on the diseases of the Army](http://books.google.ca/books/about/Observations_on_the_diseases_of_the_army.html?id=kMxEAAAAcAAJ&redir_esc=y/ .). _Pringle stated that there were two fundamental issues related to infection. The first was that inadvertent contact between medical professionals, the sick, and the instruments and surfaces they touched led to more instances of the same illness. The second was that the cause was not some mysterious ethereal phenomenon but rather an unseen one. He was certain that infections were microbial in nature and that he could stop their spread with the use of a combination of chemicals, which he termed “antiseptic“. The solution was straightforward: keep hands, clothing and environmental surfaces clean and infections would be prevented.

Despite being over 250 years old, Pringle’s efforts are still the theoretical basis of current infection control measures. Yet the relative simplicity of infection control principles are unfortunately not as easy to accomplish.

Today, healthcare facilities are an assemblage of departments each of which is responsible for carrying out certain roles. To prevent HAIs from occurring, there are usually two departments. The first is the infection prevention and control department (IPC), which is staffed with academically-trained professionals. The other is environmental services (ES), which is comprised with trade workers who do the actual cleaning the institution. Their job is to work together towards a similar goal. Unfortunately, as history has shown, this is where the problems start.

To get a better understanding of the problems in controlling HAIs, I spoke with George Clarke, an advocate for a different approach that offers both an equal voice and responsibility to all parties. Clarke’s company, UMF Corporation, recently published a white paper on a strategy called multimodal intervention that harks back to the days of Pringle but takes a modern approach to its application. By following this model of infection prevention and control, even the toughest of the pathogens, C. difficile _can be eliminated from an institution. _

I asked Clarke what he hoped his white paper would convey to the infection control community and the public.

“The message is that any singular focused program quite simply will not work. We’ve seen it throughout history and yet we haven’t learned. There needs to be an enterprise-wide approach to work together at the same table to deal with the HAI epidemic. Unfortunately, this is not the current situation in most institutions.”

The issue stems from a top-down approach to infection control. Experts have continually stressed that IPC has control of the facility and requires the ES staff to perform tasks that align with good infection control. Yet, there is a significant lack of trust in ES leading to the potential for blame in the case of an HAI. ES pushes back with the realization that they are an important part of infection control although they are for the most part regarded as inconsequential. They also counter that healthcare professionals are not adhering to their own infection control requirements, such as hand hygiene and should not be considered scapegoats.

The rift leads to a separation of the two sides and the lack of a congruent effort until an HAI occurs. When that happens, they all work together to rid the building of the pathogen. Yet that harmony is short term as soon after, the blame game seems to take over and the rift is re-established until the next time. Clarke finds this means of handling HAIs and infection control altogether frustrating.

“People need to wake up and stop sweeping the problems under the blame rug. We all know that when bad things happen, everyone works together. But with the multimodal intervention, this harmony continues. Everyone is an equal partner in both good times and bad and there is no one person to blame. ”

There have been some successes in the adoption of the multimodal strategy and more leaders in the healthcare field are recommending that it be incorporated. However, some institutions have taken the multimodal approach to an entirely different level.

Earlier this year, the Vanderbilt Medical Center in Nashville TN decided that due to budget cuts, it would force nurses to perform both their job and those of ES, housekeeping. Other constraints were also laid on the nurses leading to the potential not only for increased chance of HAIs but also for depressed morale and the lack of conviction for prevention.

Like Washington, many healthcare institutions are facing fiscal challenges and that they are trying to be inventive in their approaches. But for Clarke, this is an unacceptable reason considering the fact that the costs of a prevention program are less costly than controlling infections.

“We shouldn’t be shifting responsibilities on a whim or a budgetary line item. Besides, a proper multimodal program is cost effective. Multiple studies have shown that the number of HAI’s can be reduced by more than 30% simply by adding one person per shift whose sole job is to disinfect people-contact-points. Think about the savings versus the apparent costs. ”

Yet there continues to be a lack of focus on the multimodal intervention in place of other interventions which may appear to be good at the time but eventually prove to be costly as well as ineffective. Earlier this year, a study focused on the prevention of transmission of bacterial infections by ensuring all staff wore gloves and gowns whenever they came into contact with a patient in the intensive care unit. The idea had merit but unfortunately, its application revealed that there was no change in the rates of HAIs. In another case, a group attempted to reduce the level of HAIs in surgery by adding another program to the one in use. While there may have been value in theory, in execution, there was little change in the number of infections.

For Clarke, who has been dealing with this issue for over a decade, this is all part of the process and he is optimistic that the landscape is changing. He’s aware of the continuing political, economic and social pressures for change, including patient-centered movements to force healthcare institutions to be more mindful of the people being treated. He does fear, however, that just like in Washington, there has to be a critical endpoint, such as default, to ensure change happens.

_“There is a resolution at hand but it’s just not being adopted. Unfortunately, if these HAI isues are not taken up sooner rather than later, the entire problem could implode leaving us in an even worse place than we are now. I don’t want to see that happen but am not sure it won’t be prevented.” _

As with the problems in Washington, only time and consequences will tell how the situation unfolds. In the meantime, people can do their part by asking questions of their healthcare professionals and ensuring that when they enter the institution, there is a system in place to keep them safe.