A Microbial Means To End Dengue and Malaria

Ebola has taken much of the infectious disease spotlight as of late due to the thousands of infected and lost... 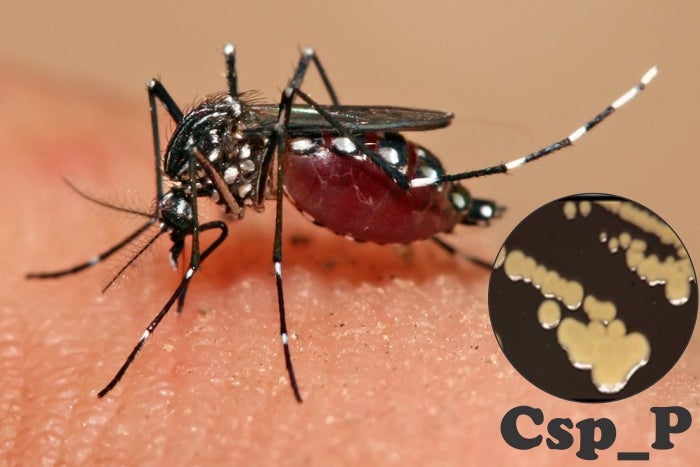 Ebola has taken much of the infectious disease spotlight as of late due to the thousands of infected and lost lives. Yet the numbers pale in comparison to two other pathogens also known to be endemic in Africa and many other countries worldwide. Combined, malaria and dengue fever account for over a quarter billion infections each year and close to three quarter of a million deaths.

Attempts to halt the spread of infections have centred squarely on the vector for the diseases, the mosquito. Over the last few decades, research has found methods to artificially prevent these pathogens from surviving in the insect. These include genetic alteration to prevent transmission and the use of specifically identified or designed strains of bacteria such as _Wolbachia _to create an antagonist to parasite replication. Yet these methods have been criticized due to the unknown consequences of genetically modified organisms as well as the risks associated with open release.

Now there may be another, more natural option. Last week, a team of researchers from Johns Hopkins University discussed how a newly discovered bacterium from the Chromobacterium genus, known simply as Csp_P, significantly reduces the levels of both dengue and the malarial parasite, Plasmodium falciparum, in mosquitoes. Even more intriguing is the fact the process of pathogen reduction is not only safe for the mosquito but also completely independent of the insect’s immune response suggesting little to no risk for adverse events.

The work was based on knowledge gained from the same institution over 50 years ago. Back then, Lee Milton Howard identified how a non-human species of malaria, Plasmodium gallinaceum, interacted with the midgut of mosquitoes to cause infection. The process was thought to involve a series of physiological events leading to infection of the cells.

Over the coming decades, the mechanism has been elucidated. The complex process involves changes in the morphology of the midgut during a bloodmeal including the appearance of tubular strands. The primary function is to improve digestion, yet at the molecular level, a number of receptors are expressed which can preferentially bind malarial gametocytes. At this point, the pathogen can hide, survive, thrive and eventually drive to the salivary glands for future transmission.

In addition to malaria, dengue has also gained much midgut attention. Over the last fifteen years, a number of studies have occurred revealing the importance of this environment for infection. In particular, all four serotypes of the virus require attachment to receptors in this area of the body to ensure initiation of infection. Once stabilized in the tissue, they can then spread throughout the body and eventually to the salivary glands.

While this postulate had viability, there was still interest in identifying particular bacteria capable of stopping malaria and dengue without the need for an immune response. In this way, the insect would not be affected as protection would be passive in nature. The search took years and various microbiomes were identified but finding a singular bacterium was elusive until last week’s discovery of the antimicrobial activity of Csp_P.

The authors of the current study had already identified Csp_P as a potential candidate for anti-dengue activity. In this study, they wanted to explore how this species protected the mosquito from the virus and if there was cross-protection against the parasite. The methods were simple in nature in that they fed mosquitoes with a non-lethal concentration of the bacterium and then followed up with either dengue or malarial infection.

The results were dramatic as the bacterium either slowed or prevented both dengue and malaria infection. In order to show this was an independent mechanism, the team went from the mosquito cages back to the lab. There, they mixed the bacteria with pure cultures of either pathogen. As expected, both dengue and P. falciparum were affected negatively. In the case of dengue, infectivity was completely abolished.

Taking the experiments one step further, the team then wanted to determine if Csp_P could inhibit other pathogens, including Pseudomonas, Proteus, Acinetobacter, Enterobacter, Serratia and the insect pathogen, Paenobacillus. Much to their surprise, all were inhibited in their growth patterns. This revealed a broad-spectrum antibacterial activity which ultimately could help the health of the mosquito.

That is, of course, if Csp_P didn’t kill them first. The authors did notice a reduction in lifespan and larvicidal activity suggesting the bacterium was a potential pathogen as well as symbiont. The authors suggested this dual-activity may be harnessed in the event population suppression is necessary. Yet, the blockage of dengue and malaria transmission appeared to offer the most significant benefit rather than simply wiping out mosquitoes altogether.

This latter point may seem to be antagonistic to current efforts to reduce the burden of malaria and dengue in the world. Yet the reality is mosquitoes are not the ultimate enemy; ridding the planet of their presence could present a significant ecological problem. Although reducing their population in human environments is a laudable goal, extinction should not be the final outcome. Instead, thanks in part to the CsP_P study, there may be a way to render them inert to our health and maintain their necessary presence on the planet. We can thus ensure biological diversity and the food chain is maintained. Achieving this balance may be years down the road but at least it is now a viable and intriguing option.