MERS May Be A Concern But It’s Not SARS

Over the last week, the number of human patients suffering from Middle East Respiratory Syndrome (MERS) has grown significantly bringing... 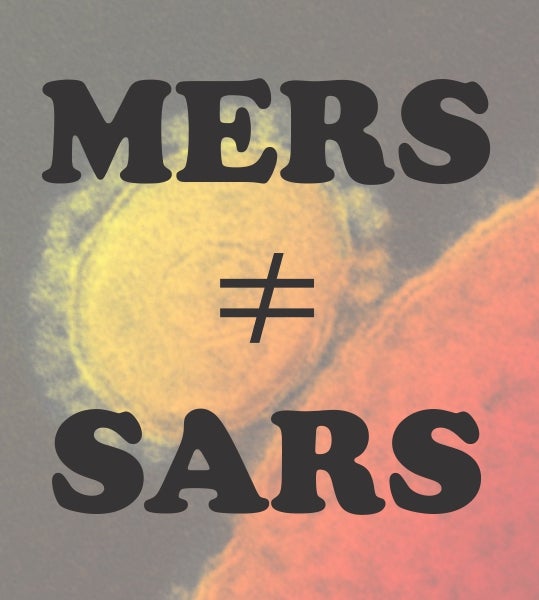 Over the last week, the number of human patients suffering from Middle East Respiratory Syndrome (MERS) has grown significantly bringing fears of a possible SARS-like spread of the disease and the potential for the development of a pandemic. Although this may be perceived as crying wolf, the concern is indeed justified albeit not to that extent. The problem lies in the apparent unanswered questions with respect to this epidemic. Without information on epidemiology, transmission, route of entry and infection control, public health officials simply cannot offer a perspective on the future of this disease.

Yet there are answers to be found. Over the nearly two years since the causative virus, the MERS coronavirus (MERS-CoV) was identified, researchers have gained significant insight into the ongoing epidemic. They have also seen just how this virus compares with SARS and the answer always appears to be the same. While MERS is a bad actor, it is no SARS and most likely will not cause a pandemic.

The first comparison is epidemiological. MERS appears to be a respiratory disease with the potential for other complications including diarrhea, muscle and joint pain, kidney injury and organ failure. There are quite a few similarities with SARS however a closer look at the progression of infection shows these two are not at all alike.

SARS is a two-stage infection requiring up to several weeks of incubation before symptoms begin. When they hit, the person remains ambulatory for upwards of ten days to three weeks. Then, when the second stage occurs, the patient inevitably requires hospitalization and in some 10% of cases, death occurred. MERS, on the other hand, requires only about 5 days for onset of symptoms (although periods of up to two weeks have been seen) and there appears to be only one stage. When symptoms begin, especially in severe cases, the person is all but debilitated and requires rapid medical attention. Death occurs in about a quarter of the population although those numbers continue to drop.

The reason for this reduction in mortality stems from the rise of either mild or asymptomatic MERS infection in healthy individuals. The median age of death is about 52 years of age and most severe cases occur in people with underlying conditions such as diabetes, renal failure, heart disease and immunosuppression. This suggests MERS may not be a perfect pathogen and normal healthy individuals may be able to fight off infection. In comparison, SARS infected people uniformly and equally as deadly; the median age of death was closer 43 years. Some did exhibit lower levels of infection, possibly due to prior infection and there were some who simply did not exhibit any symptoms.

The next comparison lies in the spread of the two viruses and how best to control it. SARS was easily transmitted in the environment while MERS continues to require close contact with an infected person or animal. Some may feel this might change allowing MERS to be spread just as rapidly. Yet the biological differences between the two means of infection suggest this may be unlikely.

SARS and other less virulent coronaviruses rely on receptors found throughout the respiratory tract. They can easily cause infection through aerosols and droplets. MERS on the other hand, infects through interaction with a protein called dipeptidyl peptidase 4 (DPP4) although it is also known as adenosine deaminase complexing protein 2 (ADCP2) and cluster of differentiation 26 (CD26). As the multiple aliases suggest, this molecule is found in many locations within the body and performs a variety of functions including cell movement as well as regulation of blood sugar and cardiac functions.

There is, however, one place DPP4 cannot be found: the upper respiratory tract. Studies have shown the protein can only be found in the lower respiratory region including the bronchi, blood vessels and submucosal glands. As a result of this, MERS infection simply cannot happen in the same way as SARS. The only means possible– at least via this route – is through deep inhalation of the virus, achievable solely through close contact with an infected person or animal. With this light shed on the situation, it is easy to see that this interaction can easily be prevented through either social distancing or by wearing a mask.

MERS does have another possible route for infection leading to an even greater concern. The virus may still gain entry through the gastrointestinal tract where DPP4 can be found in abundance. To date there is only limited data on the impact of ingestion of viruses in laboratory cell cultures. Yet a recent case in Malaysia linked to drinking camel milk may suggest this link may have credence. Should this be the case, the virus may spread systemically through the body without the involvement of the lungs. This would, however, change the focus of the virus from airborne to primarily foodborne. Control would be more intensive than wearing a mask yet could be achieved by ensuring the virus is killed either through cooking or pasteurization prior to being consumed.

The final aspect of MERS biology relevant to its spread is its survival in the environment. Studies on other coronaviruses have shown survival on surfaces for hours to days. That being said, it’s also relatively easy to kill with heat, disinfectants and even detergents. This clearly shows the importance of infection control measures, such as hand hygiene and regular surface cleaning to prevent spread.

The data suggest the pandemic fears regarding MERS may not be necessary. Due to the biological nature of the virus, its receptor for infection, its routes for spread and the relative ease of necessary disinfection measures, there is every indication this virus can be controlled and infections prevented. Yet, while the science is relatively clear, the future of MERS remains in doubt.

Research can only offer the best means possible to keep the virus at bay. But ensuring that these actions are taken requires an even harder threshold and one that may be the root cause of the problems: behavior. As seen before with SARS, avian flu and Ebola, promoting and enforcing human actions to minimize the risks is nearly impossible, even in trained individuals. Yet as long as compliance remains poor, whether in healthcare or in public, the chances for infection will continue. While the current spike in cases is most likely not indicative of a future trend, it is a reminder that even a virus not entirely suited for humans, such as MERS, can indeed cause significant disease burden and unfortunately cause a number of needless deaths.

_ [Correction: DPP4 has been found in the cells of the nasal region, which is in the upper respiratory tract. Thanks to Twitter user @influenza_bio for the information.]_