I is For Infection? The Role of iPads in Pathogen Spread

The weather in San Francisco on January 27th, 2010 was cool but inside the Yerba Buena Center for the Arts,... 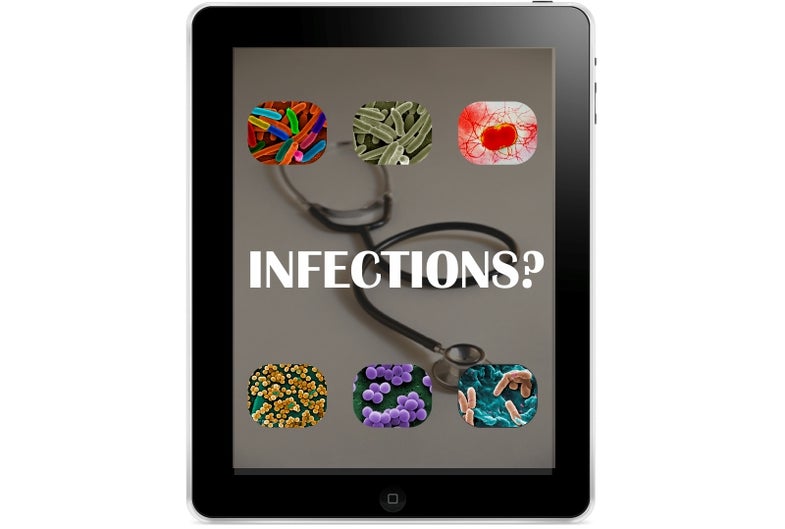 The weather in San Francisco on January 27th, 2010 was cool but inside the Yerba Buena Center for the Arts, the atmosphere was sizzling. Onstage, the genius behind the computer giant Apple, Steve Jobs, was expected to change the landscape of computing yet again. He didn’t disappoint as he introduced the iPad and began the era of wireless computing.

Since that day, the iPad and all other manifestations of the tablet design have become an integral part of our modern world. These flat, rectangular devices have improved productivity, facilitated communications, and even opened up the video game playing field. One place in particular benefiting from this technology has been healthcare. The range of tablet applications in the health field continues to grow with major foci on electronic health records, medical education, long distance consultations and the expansion of mobile health technologies, termed mHealth.

But there is a dark side to the tablet revolution. As with any portable instrument, when brought into an area where infection can spread, such as a patient room, the object, known as a fomite, may become contaminated. When this occurs, without proper disinfection, the instrument possesses the potential for spread leading to a higher risk for healthcare associated infections. Worse, unlike other well-known culprits for infection spread, such as bed rails, food tables, the toilet and sink, cartable items can be transported from one place to another increasing the likelihood of spread.

The concern with portable fomites isn’t exactly new. For decades, the universal sign of medicine, the stethoscope, has been identified as a source of disease-causing bacteria. Since 2007, the mobile phone has been regarded as a potential vector for spread. Today, even the individual as a whole is suspect as everything from lab coats to scrubs to those fashionable neckties can be regarded as carriers.

But while studies showed the risks associated with clothing and phones, there had been no study to determine whether tablets could pose a risk. That changed last week when a team of researchers from Northeastern University investigated the level of microbial contamination on iPads and whether infection prevention and control practitioners have to worry about yet another fomite.

The study took place at Northeastern University in the Department of Pharmacy Practice. The group gave all 30 faculty members an iPad for their work. They were not given any instructions on how to care for the tablet nor how to clean it. Six months later, the iPads were swabbed and the bacteria cultured. To be sure the study was robust; a number of different media were used to ensure proper selection and differentiation of microbial species. When the swabbing was performed, the faculty member was asked to complete a survey to determine the location and nature of their practice, the frequency of tablet use, the choice of barrier protection (such as a device cover) and cleaning regimens used, if any.

The information was not only informative but also offered significant value in assessing the risk from the tablets. The most surprising was the relative lack of interest in cleaning. During the six months, only half of the faculty members cleaned their iPads, even once. This was in light of the data revealing more than 70% of the members used the devices at their practice sites and in patient care areas.

The information was not significantly different from the rest of the public; cleaning any mobile device is not considered to be a priority. Yet, when the bacteria isolated from the tablets were identified, the potential impact became apparent. The majority of species were skin and fecal in nature, which was to be expected. But pathogens were identified, including MRSA, VRE, and Pseudomonas aeruginosa. The study did not look for one of the most problematic microbes, Clostridium difficile, but the authors suggested they may also be present.

Though the study offered valuable information to the understanding of the impact of tablets in infection prevention and control, the results do not prove iPads are culprits in spread. No followup was conducted to link any of these microbes actually to patient infections. Moreover, no genetic analysis on the isolates was performed to determine if they were healthcare-endemic or brought in from the environment.

There is, however, a definite takeaway message: clean your mobile devices. This study focused on doctors working in health care however the rest of the population can learn from the results. No matter how well a tablet, mobile phone or even laptop may be protected, the chance for contamination exists. Although the risk for infection may be low, it is no excuse to eschew a thirty second wipe with a good cleaning solution and cloth. The process requires less time than downloading the new U2 album and if done regularly, can help eliminate the risks for illness.