Genes, Germs and the Dance of Disease

When it comes to conflict and blame, the phrase, “It takes two to tango,” always seems to come up. After... 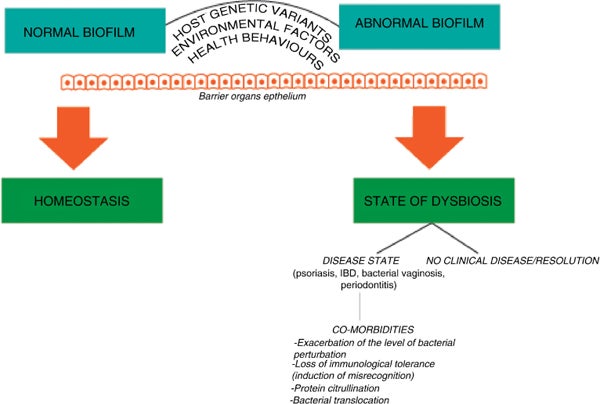 When it comes to conflict and blame, the phrase, “It takes two to tango,” always seems to come up. After all, blame can be equally shared by opposing sides and settlement can only occur if the two take responsibility for their actions – and find ways to change or improve the situation. While this may be straightforward in macroscopic situations such as war, workplace difficulties and family disputes, when it comes to the microscopic environment, including the development of disease, the challenges are much greater and more difficult to resolve.

A century ago, the concept of infectious disease has been thought to be a one-way street. A pathogen enters the body, there’s an acute phase of illness and there is either recovery or death. Since the turn of the millennium and the emergence of the human genome project, the human microbiome project, and systems biology, there has been a widening of scope, from acute to chronic and also from cause to tango partner.

Perhaps the earliest example of this dreadful dance came from studies of cystic fibrosis. The disease was linked to a mutation in the cystic fibrosis transmembrane conductance regulator (CFTR) gene that then led to lung disease and a series of other problems including gastrointestinal and pancreatic dysfunction. Individuals were also more likely to end up with lung infections, particularly from the bacterium, Pseudomonas aeruginosa.

At first, infection was thought to be a matter of consequence; the gene mutation simply allowed the bacteria to enter the lungs and thrive. But further study of the disease revealed a more complex picture. There were a number of other genetic variations that occurred in the human genome contributing to infection not only with P. aeruginosa but a number of other lung pathogens. This suggested that not only was the one mutation to blame, but the overall genetic makeup of the individual could possibly be involved in determining his or her fate.

Since the identification of cystic fibrosis as a two-way street of illness, several other genetic factors have been identified as tango partners for disease. A number of genetic loci responsible for a range of functions from immunity to blood antigen production to cell fate have been linked to a higher number of infections in Crohn’s disease patients. Diversity in the front line of immunological defense, the toll-like receptors has been associated with higher susceptibility to infections including Legionnaire’s, lyme disease and meningitis. Perhaps most intriguing is the nature of a single allele in the human genome known as CARD8. It can determine whether a cell will fight or give up and die when Salmonella infects. If it is the former, the symptoms may be mild; if it is the latter, the infection may be quite severe.

With so much evidence to support the nature of human genetic contribution to disease, it was no surprise that eventually, someone would come up with a name for this branch of study. As we are living in the ‘omics’ era, there was little doubt that this would eventually harbor a similar suffix. This week, a group of researchers in London, England, did just that in a paper that offers up a new name for the study:

Granted, the name is not particularly catchy but it does offer some perspective on how the nature of the human genome may contribute to the onset of not only acute, but chronic disease. The paper itself suggests that bacterial colonization of the body is dependent on what our genetics allow and reject. If gene variations that allow disease are present, the condition is called genetic dysbiosis, presumably a tip of the hat to recent work with the microbiome in which certain diseases are associated with microbial dysbiosis. Should a person have any of these identified gene variations, then a higher level of associated infections is to be expected. While there may be no means to actually stop the consequences from happening, potential preventative measures might be available to at least minimize the risk.

Infectogenomics may be in its infancy and quite honestly may never have a chance to develop. The scientific community is rife with omics studies and there may simply be no room for another. However, there is hope that the foundation behind its declaration will spark researchers into looking towards a more unified vision of health. While human genetics and microbiology may be two different universes in the laboratory, they can merge and even work together to help to solve some of our greatest health threats. It will take time, but if the two research partners decide to dance together, the future may be filled with harmony and perhaps the occasional dance.