The Curse of the Cruise Ship Cannonade

Travelling on the high seas was at one time the only means to travel around the world. With the dawn... 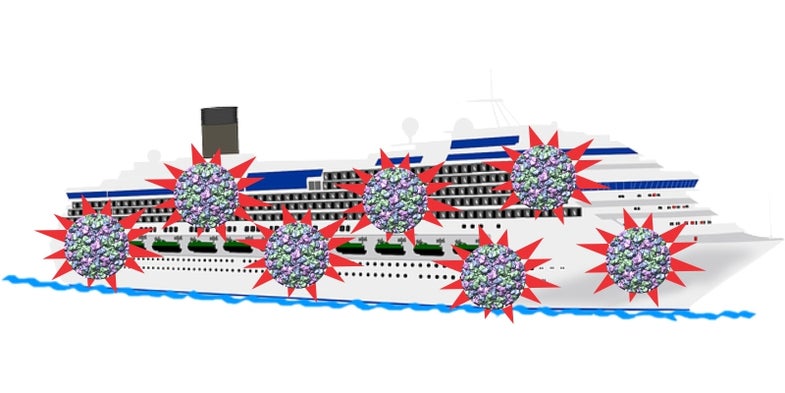 Travelling on the high seas was at one time the only means to travel around the world. With the dawn of air travel, the oceanic outing has turned from obligation to occasion, epitomized by the rise of the cruise industry. Today, there are dozens of vessels, from simple skiffs to luxury liners skimming the surface of the seas offering holiday-goers the opportunity to experience the earth and all it has to offer in a slower, more engaging manner.

While technology has advanced the appearance and function of today’s ships far beyond that of the tall ships of yesteryear, there is one problem that has yet to be solved. Whether smallpox in the 15th Century, or the increasing number of pathogens on cruise ships today, there appears little can be done to stop the sudden and overwhelming onset of an infectious disease outbreak.

This week, another such invasion occurred leaving some 600 people sickened. The culprit, while still not confirmed, is assumed to be norovirus. The virus has been known for over 40 years but despite all efforts to control its spread, little can be done to stop its effects on a population once an outbreak begins. Today, the virus is the most common cause of gastrointestinal viral infection and has been blamed for the majority of the over 100 known outbreaks since 1994.

Thankfully, with norovirus, there is little risk of lethality as seen with smallpox. Though there is a potential for death in a small percentage of cases, particularly those who have undergone chemotherapy and transplantation, the majority of people suffer 24-72 hours of vomiting, diarrhea, stomach cramps and other body aches. Where the two are similar lies in how incredibly easy they can spread from one person to another; one individual could potentially infect up to 6 or 7 others. Without intervention, the number of inflicted passengers could quickly outnumber the available toilets.

Though norovirus takes up the majority of ‘cruise-ship nightmare’ stories in the media, the actual progression of the epidemic has been fairly similar throughout the ages. There is inevitably an index case, a traveler or a crew member, who falls ill. Although the most effective means of prevention is isolation, these individuals continue to be a part of society. Eventually, the disease spreads to others and within a matter of days, what could best be described as an explosion of cases that all but cripples the ship requiring it to head to port for medical attention and a full cleaning.

From a purely epidemiological perspective, the ship, whether tall or cruise, is an interesting model for the study of infectious disease outbreaks and has been placed in the same category as military barracks and college dormitories. The common element to all these environments is their nature as confined spaces with a high population density; there is almost no space left open without the presence of at least one human being. The spread of any contagious infectious disease would be expected to be high without a strict adherence to proper hygiene procedures. As most people in these situations are simply not trained to perform these measures, the potential – and unfortunately, reality – of these situations is quite dire.

But what sets the ship apart from the other two environments and other enclosed spaces such as malls, hospitals and even the home, is that they are mobile. These vessels travel hundreds if not thousands of miles with the occasional port of call to a variety of destinations, including those that are known to have endemic infectious diseases. Each stop therefore portends a possible infection in at least one person. With the amount of time needed from exposure to symptoms long enough for the passenger to return to the ship in apparently good health, there is little chance for the crew to prevent the pathogen from embarking and causing the incapacitation.

Despite this rather gloomy outlook, the cruise ship continues to be a relatively safe means for travel. Most liners have adopted recommendations from the CDC Vessel Sanitation Program and offer for the most part an illness-free opportunity to explore a certain corner of the globe in an entertaining and comforting way. Although the risk for norovirus infection is always present, it is about the same as going out to a new restaurant or travelling by air.

Whether the culprit is norovirus or some other infection such as Salmonella, C_ampylobacter_, E. coli, flu or coronavirus, we must accept that travel now means risk. To ensure a better relationship with germs, we have to first off accept that pathogens have become a part of our leisure and then realize that we must be even more diligent to achieve the best level of hygiene. If not, then the classic R&R may be redefined from rest and relaxation to retreat and recover. Quite honestly, no one wants that.