The Case of the Janus-Faced Microbial Genus

What makes a bacterium pathogenic? Answering the question has been the vocation of thousands of microbiologists over the decades. Thanks... 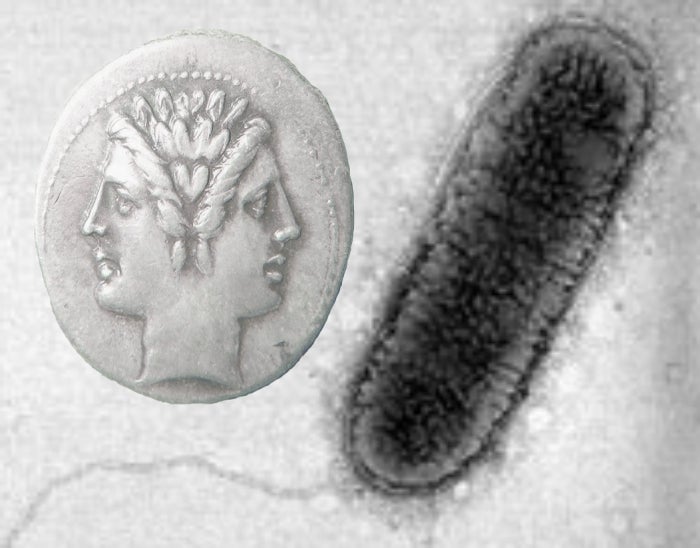 What makes a bacterium pathogenic? Answering the question has been the vocation of thousands of microbiologists over the decades. Thanks to their hard work, a clear delineation between harmless bacteria – commensals – and pathogens has been established giving public health officials and medical professionals the ability to diagnose and treat infections effectively. But over the last 40 years, certain genera and species have blurred the line leaving many with another question: can a commensal also be a pathogen?

The first examples were observed in the 1960s when a group of normally believed commensal bacteria called mycoplasma revealed to also have pathogenic potential. The discovery set off a number of searches to find other possible cases of good germ, bad germ. In the 1970s, one particular bacterium, Pseudomonas aeruginosa revealed it was both a friend and foe depending on the circumstances. By the 1980s, researchers understood a plethora of microbes had both properties, manifested particularly in young children.

As the hunt continued, more bacteria were added to the list, suggesting exposure could be a double-edged sword. Some of the most disconcerting revelations included the double-crossing nature of the gastrointestinal E. coli _and the normal skin flora constituent, _Staphylococcus epidermidis. Though invasions were significantly rarer, the evidence suggested we could not take them for granted.

Though acceptance of the concept of the two-faced microbe was fairly quick, understanding the mechanisms behind this switch took much longer. The advent of molecular biology, in particular genetic analysis, helped to clear the fog providing a perspective on how these bacteria evolve from harmless to horrendous. The key to this transformation was found to be a combination of changes at the DNA level as well as selection due to environmental stressors.

One of the first discoveries happened in 1998, when researchers associated pathogenicity of several E. coli and Shigella species to a significant genetic alteration: deletion. If certain parts of the genome went missing, the bacteria were more likely to be harmful. The authors suggested the concept of a genetic ‘black hole’ forced the bacteria to look for other pieces of genetic material in order to compensate. Should that acquisition be a pathogenic island, the bacterium and its progeny would forever be changed. A few years later, in 2004, similar acquisitions were found to occur naturally in commensal Streptococcus and could be selected based on environmental factors. The authors also suggested in certain cases, this change was evolutionary in nature and could be traced back to find an original mutation.

Last year, a European group took this hypothesis to task and revealed how natural evolution can render harmless E. coli a nasty infectious agent. Looking at the genomic sequences over time, they were able to identify critical changes leading to a combination of problematic behaviors, including pathogenesis, multiple organ tropism, and antibiotic resistance. Essentially, the bacteria didn’t turn into a pathogen as a result of a need to feed and kill humans; this was an entirely normal process based on exposure to the human environment, different tissues and organs, treatment with antibiotics and ease of spread. Not surprisingly these factors are also the most important features of infection prevention and control programs.

While understanding how human bacteria can turn against us, there has also been some concern over the potential of environmental bacteria to do the same. The transformation of a microbial soil or water inhabitant to human pathogen is not common but does happen. Perhaps one of the most troublesome examples is the infamous Stenotrophomonas maltophilia. Known as an effective biocontrol agent, it has been used to prevent certain types of rot in root vegetables. Because it was assumed to have a negligible health impact on humans, there was no assumed risk due to use. But over the last 35 years, this microbe has shown a Janus-faced transformation leading to its emergence as a significant threat to human health, particularly in healthcare.

Last month, an Austrian team of researchers decided to look into this phenomenon and offered some insight. The group looked at the genetic differences between the bacterium and a closely-related non-pathogenic cousin, Stenotrophomonas rhizophila to determine what might have happened. At first glance, there appeared to be little difference between the genetic codes of the two species. But taking a closer look, the data revealed adaptations to very different lifestyles.

The group initially searched for any possibilities of changes, including the acquisition of virulence genes, providing an ability to resist the human body, evade the immune system, and develop antibiotic resistance. They found all of these critical factors were present in S. maltophilia, yet none existed in S. rhizophila. The researchers then looked for other factors, such as optimal temperature and salinity, surface adherence proteins and certain protein-degrading enzymes. Again, there were marked differences; S. rhizophila was designed to live in the cool, moist soil whereas S. maltophilia preferred the warmer, wetter climate of the human body.

While it was clear these two species came from the same ancestral origin, they had obviously gone through different evolutionary paths leaving one good for humans and the other a major problem. Unfortunately, there was no indication as to how and when the divergence occurred. Presumably, S. maltophilia entered the human population through agricultural exposure and eventually adapted over time to the human environment. Whether S. rhizophila might be able to do the same, the authors suggest this isn’t possible and yet, they could not be sure.

The results of the study suggest a need to be more careful in the future when using biocontrol agents as well as mark the need for more regular surveillance to ensure a bacterium hasn’t made the jump from benign to burden. Moreover, there is a need to look at the entire environment, not just the human body, as a breeding ground for such commensal to pathogen changes. Although these continue to be few and far between, as seen in the case of S. maltophilia, it is better to be prepared for the inevitable rather than being taken off guard and needlessly losing more lives.