Like Bats in West Africa, Do Rats in the Big Apple Pose a Hidden Zoonotic Threat?

Over most of this year, Ebola has made international headlines as it raged through the human population in West Africa.... 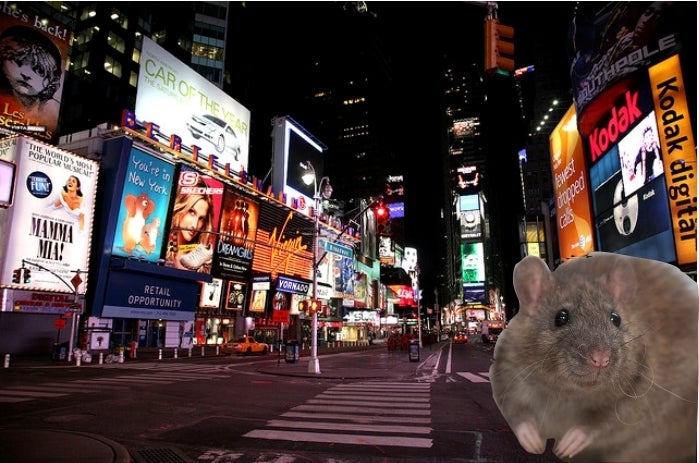 Over most of this year, Ebola has made international headlines as it raged through the human population in West Africa. Amidst the response effort, many have worked tirelessly to identify the origin of this epidemic. It has been a lesson in frustration. Though no confirmed source has been documented, the virus appears to have come from bats through a process known as zoonotic transmission.

While these flying creatures appear to have taken the spotlight, they represent only one of the possible creatures capable of giving infections to humans. The most common of these are insect-borne diseases, such as malaria, West Nile Virus and Lyme disease. Mice also have played a role in spreading infections, particularly the hantavirus, which caused an outbreak in 2012. Then there are birds and swine, which have helped spread highly pathogenic avian influenza strains including H5N1 and H7N9. Finally, the Middle East Respiratory Syndrome coronavirus apparently has come from camels.

While all of these animals are cause for concern, none compares to the king of all zoonotic vectors. This one creature reigns over all other in its legendary reputation for causing human misery and fear: the rat.

Ask any public health historian and the rat will reveal itself to be an integral factor in our history primarily because it is known for being a significant contributor to the spread of the Plague. While scientifically, this is not entirely the case – the bacterium associated with the plague, Yersinia pestis, is actually spread through fleas – from a social perspective, the mere observation of a rat confers concern for the spread of illness. This in combination with the realization rats are endemic worldwide and lead to both rural and urban infestations suggests this small rodent could be the most dangerous animal on Earth.

There is some validity to the statement. Back in 1994, a risk assessment of illness in a rural area revealed the odds of catching a particular infection, leptospirosis, were 28 times greater if the environment was suffering from a rat infestation. In comparison, other animal vectors for diseases such as pneumonia and scarlet fever were at most 7 times higher. By 1999, investigations suggested the similar risks in urban environments. In 2002, a look at the increasing number of rat infestations in UK cities provided more than enough reason for concern.

In the years since, numerous studies have attempted to identify the potential for rat-borne zoonotic infection in densely populated environments. Whereas the plague has yet to be found – it is still limited to rural locales – a plethora of other diseases have been isolated. They range from the above-mentioned leptospirosis to Toxoplasma gondii, Salmonella typhi, which is the cause of typhoid fever, antibiotic resistant E. coli and even tapeworms.

As the number of urban environments examining the zoonotic potential of the rat population increases, one location has yet to be explored. It’s the one place in America known for its rats, if only through jokes and late night punchlines: New York City. Although it isn’t the capital of rat infestation – that title belongs to Chicago – there has been a long standing problem with rodents and the situation appears to be getting worse. As if a call to microbial arms, this led a team of New York based researchers to hunt down the microbes living in the depths of the city and to determine if there really was a risk.

The group collected 133 Norway rats (Rattus norvegicus) from different sites all over the city. Back at the lab, the researchers went to work looking for microbial genetic material in the blood, urine, fecal matter, saliva and every organ. When the test results came back, the overall picture was even more incredible than theorized.

For the most part, there were a few pathogens found including the foodborne Campylobacter jejuni, Shigella and Cryptosporidium parvum. But as expected, there was no sign of Y. pestis. While residents could be relieved at the absence of plague, the researchers did find something a little worrisome. A few rats were found to have a hantavirus called Seoul virus. The virus is known to cause a form of hemorrhagic fever and has been implicated in thousands of cases in Europe and Asia. The Norway rat is known to be a carrier yet the pathogen was not considered to be in New York City; this was an unexpected finding.

But the identification of the Seoul virus was just the beginning. As the team looked further at the sequences, they found 27 viruses in the population. Of them, 13 had never been seen before. Thankfully, none of them represented any human pathogens but the result left the team with a great deal to think about in terms of ecology.

From the identification of the novel strains, the study points to New York City as a true concrete jungle. In the underground world safe from the watchful eye of human public health officials, rats have developed their own population, their own society and their own microbial ecology in which viruses are free to evolve and adapt. While none of the new strains found were pathogenic to humans, the potential is there.

The authors didn’t call for increased rat control in the Big Apple but there is little doubt something must be done. If the number of rats cannot be controlled, then there should be a surveillance system put into place. Should any microbial commensal decide to turn into a human pathogen, it would be better to be safe and alert than to be taken by surprise not from afar, but right underneath our feet.