The Bacteria in Bees Give Honey Its Healing Properties

Back in the days of Ancient Egypt, medicine was rudimentary at best and few remedies have stood the test of... 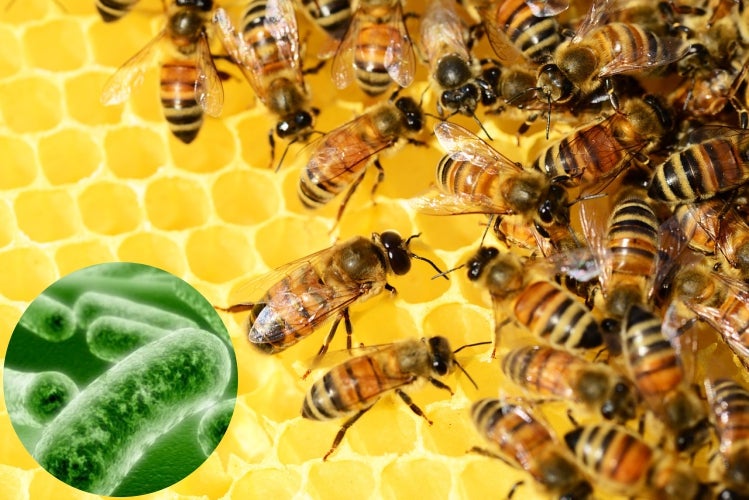 Back in the days of Ancient Egypt, medicine was rudimentary at best and few remedies have stood the test of time. Yet one particular treatment, the use of honey in medicine, has resurfaced over the last two decades. The thick gold liquid normally reserved for eating has been put to the test and the results have led to an increasing [acceptance](http://researchcommons.waikato.ac.nz/bitstream/handle/10289/2059/why/ hone..?sequence=1) from both scientific and medical communities.

It may be hard to believe an age old treatment could possibly represent the future of medicine but in the case of honey, research has proven its [effectiveness](http://www.axel-madsen.dk/Files/Billeder/saarbehandling/Honey_and_Wound_Healing__An_Overview/ 51.pdf) particularly in wound management. Not only can it help speed up healing, but it also can prevent infections from a number of different bacterial species. A systematic review of the use of honey as a wound dressing has all but confirmed its benefit.

While the properties of honey have been extensively studied, the question as to how honey becomes so effective has been left unanswered. In order to understand the process, researchers have had to leave the confines of the lab and head to the apiaries to investigate how exactly honey is made. What they have gained from their observations is an understanding of the fascinating symbiosis between bees and bacteria.

Much like all higher living organisms, bees have a distinct microbiome. While there are geographic variations, a number of microbial species are common to all. These symbionts help to keep the bee healthy especially from parasites and ensure the brood is sustained over generations.

A closer inspection of the nature of these microbial companions reveals many are lactic acid bacteria including several species of Lactobacillus and Bifidobacterium. Functionally, these bacteria primarily help to prevent the introduction of pathogens into the hive and appear to help maintain good gastrointestinal health in the bees. As lactic acid bacteria are also known to help develop beneficial byproducts from sugars, there was an interest in understanding whether these species were also involved in the development of the benefits of honey.

As far back as 1975, lactic acid bacteria were known to be involved in the metamorphosis of nectar into honey. The mechanism involved three stages from stomach nectar to higher-moisture honey to the final low-moisture product. In each stage, the bacteria decrease in numbers but leave behind a number of excellent byproducts including antioxidants, flavonoids, polyphenols, and several elements including calcium, copper, magnesium, iron and zinc. The overall chemical composition suggested there was plenty to benefit the body – bee and human alike – but there was little indication as to how this could help prevent infections.

Now, there may be an answer. Last week, a team of researchers from Sweden revealed their observations on the influence of lactic acid bacteria as a potential antimicrobial in human wound infections. The team took 13 symbiotic strains from the honey stomach of bees, specifically Apis mellifera. They isolated the microbes in the lab and then put them to several different tests. Each one was designed to reveal how these bacteria could not only fight off infections themselves, but also rendered honey with the same activities.

The first tests were simple enough. The lactic acid bacteria were overlaid on cultures of different clinical isolates of infection-causing wound bacteria. As expected, the human pathogens were inhibited. When these results were compared to antibiotics against these same pathogens, the good bacteria were clear winners. A closer inspection of the chemicals produced during battle revealed a number of antimicrobial molecules including hydrogen peroxide, formic acid, benzene, and toluene.

Though this was more than enough to provide a clear understanding of the antimicrobial mechanism of lactic acid bacteria, the group went further to identify other compounds in the honey with potential preservative effects. They found 3-hydroxy fatty acids, which are known to be antifungal in nature and 2-heptanone, an antimicrobial substance found in sea algae.

The team also showed the ability of the bee bacteria to form biofilms – much like they do in the gastrointestinal tract – to act as a barrier against the introduction of pathogens. Though their numbers dropped over the three stages from nectar to honey, the byproducts left behind were enough to ensure the final product was safe for the brood as well as for humans.

Thanks to this study and others, the future of honey as a wound treatment looks bright. Moreover, with the antibiotic resistant era looming, there is every indication this ancient medicine will be deconstructed further such that individual medicines based on the byproducts of the lactic acid bacteria will be made. While science once again catches up to nature, you may feel comfortable the next time you have a cut or an inadvertent slice of the finger, acting like an Egyptian and turning to the golden liquid for rapid and proper healing.