The Year in Plagues: The End of Antibiotics, Fist Bump for Health, and More

In case you haven’t had enough end-of-year lists, here are links to my personal favorite stories from 2013. Think I... 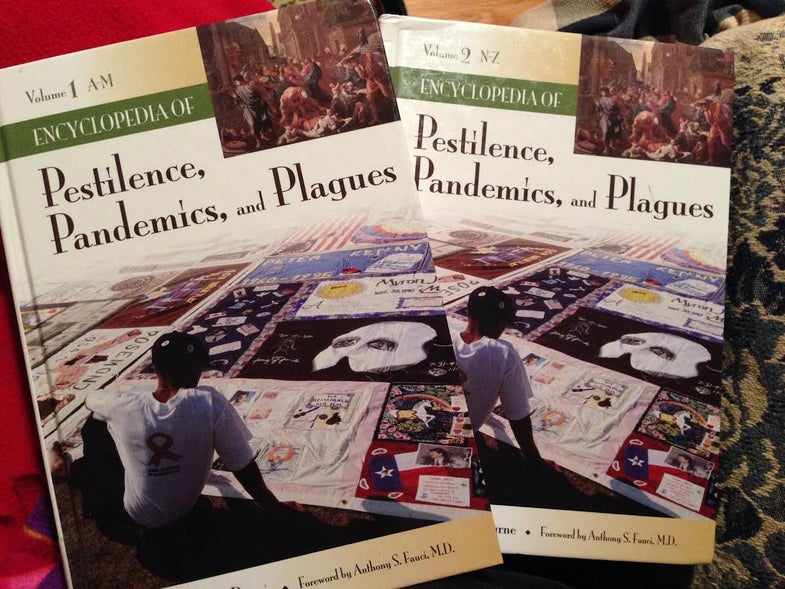 My favorite gift from this holiday season. Brooke Borel
SHARE

In case you haven’t had enough end-of-year lists, here are links to my personal favorite stories from 2013. Think I missed something big? Add it in the comments.

Also, I got the two-set Encyclopedia of Pestilence, Pandemics, and Plagues for Christmas from my thoughtful husband (see photo), which I plan to put into good use in 2014. With chapters that include “Black Death: Literature and Art” and “Scapegoats and Epidemic Disease, I hope that makes you as excited as it makes me.

Maryn McKenna gave a terrifying peek at what the future would look like without antibiotics, via Medium.

And National Geographic interviewed a surgeon who says fist bumps should replace handshakes because they lower the chance of transmitting bacteria.

Matthieu Aikins at Wired wrote about the difficulties in eradicating polio in Afghanistan. The story also has really beautiful photos.

Amy Maxmen wrote for Nature about an intriguing and controversial move to prevent malaria in Africa.

Grist’s Nathanael Johnson had a great series that broke down common claims about GMOs, which he compiled into an end-of-year list. I don’t agree with his take on the labeling issue (I don’t think it’s a good idea) but overall great reading here.

Amy Harmon had an excellent piece in the New York Times on using genetic engineering to save orange and other citrus trees.

In the New Yorker, Michael Spector wrote about environmentalist Mark Lynas’s shift from anti- to pro-GMO.

And here is a story by Jon Mooallem in the New York Times that is guaranteed to make you itch. It’s about invasive crazy ants in Texas, and whenever a story lede includes a name like Mike the Hog-a-Nator, you know you’re in for a treat.