The Pros and Cons of Herbicide-Tolerant GMOs

Welcome to the third installment of my GMO series, which aims to expand on a story I wrote for Popular... 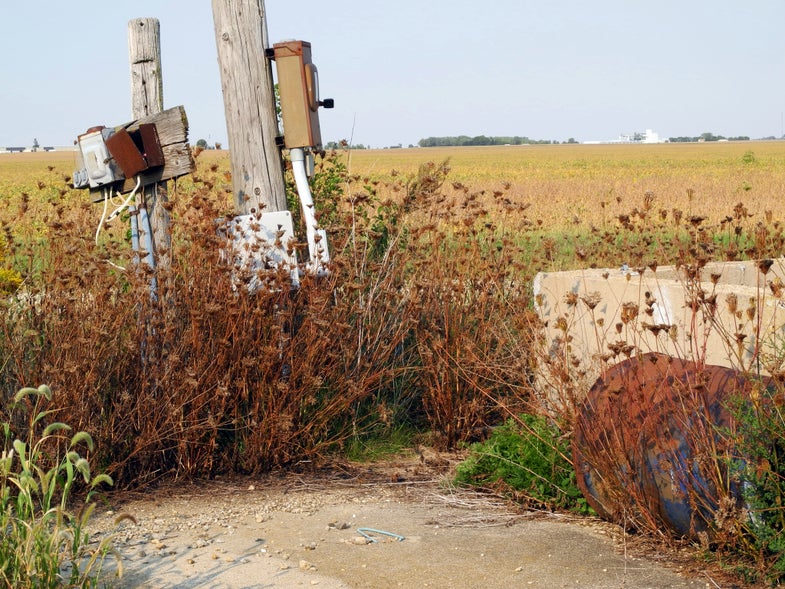 Welcome to the third installment of my GMO series, which aims to expand on a story I wrote for Popular Science’s July issue. In this post, I will discuss herbicide-tolerant crops—among the most common GMOs currently on the market—as well as the technology’s pros and cons. And despite what you may have heard one way or the other, there are both. And it’s complicated.

Farmers are constantly battling pests in the field, whether insects or weeds. No matter what kind of farming it is—organic, conventional, whatever—some level of intervention is required on both fronts. Each of those interventions comes with a cost, whether it’s economic, environmental, or a mixture or both.

For weeds, there are a several common tools, says Steve Powles, a plant scientist at the University of Western Australia and director of the Australian Herbicide Resistance Initiative. The first is simply good agronomy, which includes maintaining crop nutrition; rotating cover crops to promote soil health; and keeping crop rows fairly tight so there isn’t enough room—and eventually, when the crops grow tall enough to form a canopy, sunlight—for unwanted plants to grow. A healthy, well-planned field helps crowd out weeds.

Weeds can still grow, though, so there are various approaches to kill them including: mechanical (tilling or hand-weeding), heat-based (“flaming” with propane torches) and chemical (herbicides).

There are downsides to each. Tilling can erode soil, which means that not only is it less healthy to support crops, but that it can pollute waterways and choke aquatic flora and fauna. Flaming has obvious safety and pollutant concerns. Overusing herbicides can drive weed resistance because some of the plants will inevitably withstand the chemicals and produce offspring that are similarly hardy—it’s an evolutionary inevitability. Too much herbicide can also cause various environmental problems, although these vary depending on the chemical. Even rotation has an economic disadvantage, at least in the short term, as some cover crops don’t fetch much on the market.

The best option for weed control, says Powles, is to use a combination of all of these tactics as appropriate for a specific piece of land. And for herbicides and the potential for resistance, he adds: “If you’re getting great weed control with a herbicide, stop using it for awhile.”

The easy fix that wasn’t

Across the developed world, conventional farmers have relied heavily on chemical weed control since the mid-1900s. In 1996, Monsanto made chemical control even easier by bringing herbicide-tolerant soybeans to the market (other crops followed). The seeds were genetically-engineered to withstand a popular broad-spectrum herbicide called glyphosate, marketed as Roundup Ready, which meant farmers could plant the crops, spray the field with herbicide, and call it a day. Monsanto didn’t spark the love affair with herbicides, but extended it, says Stephen Duke, a plant physiologist and glyphosate expert with the USDA Agricultural Research Service: “It continued our dependence on herbicide, but even in the absence of the GMOs, we were pretty much extremely dependent on herbicides. It really didn’t change anything—it just changed which herbicide we were using.”

The upside of the Roundup Ready system was that farmers could stop tilling, which prevented the associated environmental pitfalls. Glyphosate also has a low toxicity—lower than that of caffeine. “It’s probably one of the safest herbicides in terms of environment and human health,” says Keith Solomon, an environmental toxicologist and pesticide toxicology expert at the University of Guelph in Ontario.

As the Roundup Ready GMOs became increasingly popular, glyphosate replaced older chemistries, some of which are more toxic. This, too, was considered a bonus by some. But it came at a cost. “We are seeing a huge increase in glyphosate resistant weed, which is totally expected because of the increased use,” says Andrew Kniss, a weed ecologist at the University of Wyoming. Sometimes these weeds are called “superweeds” in the press, although Kniss says that’s a misnomer. It isn’t that the herbicide-tolerant genes in the GMOs are mixing with the weeds to cause the resistance; instead, it’s just a matter of old-fashioned evolution.

In the US, the biggest problem-weed is glyphosate-resistance palmer amaranth, which was first discovered in Georgia around a decade ago, according to Stanley Culpepper, a weed scientist at the University of Georgia. Since then, he adds, the industry has spent $1 billion to control the weed. Many farmers have returned to hand-weeding..

Today, the resistant palmer amaranth has spread across the southern US and into the Midwest as far north as Minnesota, partly because of an increasingly connected agricultural system. Farmers in northern states, for example, might buy seed stock or farming equipment from a farm in the south, which could have resistant seeds inadvertently mixed in or stuck inside, respectively. The problem is compounded by the fact that so many farms rely on glyphosate, rather than rotating different herbicides or using other weed control tactics, leaving the resistant weeds to spread unchecked.

Worse still, research from Powles group in Australia suggests that the genetic changes in glyphosate-resistant palmer amaranth don’t come at a great cost for the plant. In other words, even in the absence of glyphosate, the plant will remain resistant. This means that in some fields where resistance has run amok, the herbicide is completely lost—we can’t simply give glyphosate a break for a few years and then return to it, because the palmer amaranth will still be immune.

Can we break the herbicide cycle?

It costs up to $256 million and around nine years to develop a new active ingredient for a pesticide. And for herbicides, there are no new options in the pipeline, says Jason Norsworthy, a weed scientist at the University of Arkansas, who adds that the last new herbicide came out in the 1980s. “It’s like climbing a mountain, climbing a cliff. We’re accumulating all these resistant weeds, we’re not accumulating new modes of action. And at some point we’re going to go over the cliff.”

And even if chemical companies find a new molecule that shows promise as an herbicide, it likely won’t be as powerful or useful as glyphosate. Norsworthy adds that in his lifetime, he “will never see another herbicide that will have the impact of global agriculture as glyphosate.”

With glyphosate losing efficacy in many fields, biotech companies are poised to roll out new herbicide-tolerant GMOs that use older chemistries, including 2, 4-D and dicamba. (The former is often called the Agent Orange herbicide in the press, which isn’t quite right. Agent Orange was a mixture of 2,4-D and another herbicide called 2,4,5-T. In Agent Orange production, the 2,4,5-T was contaminated with a dangerous dioxin, which is what likely caused the health problems you hear about).

Many experts I’ve talked to worry that farmers will see the new herbicide-tolerant GMOs as a panacea, sparking a new generation of resistant weeds, although it might not be as widespread as the glyphosate problem because 2,4-D doesn’t work on as wide a range of plants as glyphosate and might not be used as broadly (2,4-D, for example, is ineffective against grasses).

Still, overuse is a worry. “As an agricultural society, we have to get out of the habit of using herbicides until they break, thinking industry is going to save us with a new mode of action,” says Norsworthy.

Powles, who helped successfully battle herbicide-resistant weeds in Australia long before the glyphosate problem started in the US, agrees. The key is to alleviate reliance on herbicides by diversifying weed control. Farmers in the US and beyond must adopt a multiple-pronged approach, says Powles. This includes proper agronomy and various mechanical tactics along with a regular rotation of herbicides, which should be used judiciously as needed. “I have absolutely no doubt that herbicide resistance can be managed in the US,” he adds. “But not without very substantial change to the current paradigm—the current way people think—which is ‘what herbicide and what way.’”

Some states are already implementing diversified weed strategies, including farms under Culpepper’s watch in Georgia. But whether farmers across the country—and world, for that matter—will adopt the approach broadly remains to be seen.

So, the TL;DR version is that while herbicide-tolerant GMOs have played a large role in driving glyphosate resistance, they’re part of a larger systemic problem in modern agriculture, which is overreliance on herbicide. A diversified weed plan—tailored to each farm, depending on location and other details—would be ideal. All of the scientists I’ve talked to on this matter say GMOs could play a role in a sustainable weed system, but only if they are not overused. Of course, biotech companies have an incentive to push their products, which certainly could drive overuse and thus resistance. I don’t have the answer to fixing that, although, as Kniss tells me, public funding for weed management would help.

What do you think? How can we use GMOs judiciously when it comes to herbicide, so that we can have the advantage of the technology yet maintain the best possible weed control system for our farms? As with my other GMO posts, I’m leaving the comments open. Please follow two simple rules: stay on topic and be civil.

For more on how we might break the resistance cycle, read: “How we can fight back against herbicide-resistant superweeds,” by Nathanael Johnson at Grist.

For more on the controversy over 2,4-D GMOs, read: “The Next Generation of GM Crops Has Arrived—And So Has the Controversy,” by Brandon Keim at Wired.