The neonatal intensive care unit can be a scary place for premature babies: breathing machines lift and lower tiny chests,... 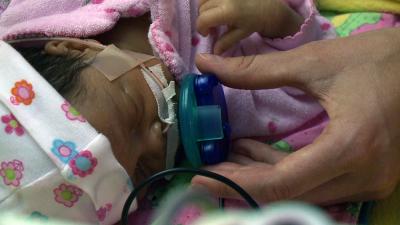 The neonatal intensive care unit can be a scary place for premature babies: breathing machines lift and lower tiny chests, monitors bleep and bloop, and feeding tubes provide nourishment for tiny babies who are born so early they haven’t yet learned to suck efficiently.

Researchers are starting to look at the NICU as a setting that can be improved to help babies thrive. Recent studies found that babies housed in private, quiet rooms had brains that matured slower than those who stayed in an open ward – and that it might have to do with talking and snuggling from adults.

Other studies have shown that babies can recognize their mom’s voice at just 30 weeks old in the womb, and they have a preference for their mom’s voice over other female or male voices at 3 days old. Now, researchers have harnessed the soothing timbre of mom’s voice to help preemies eat more efficiently.

Nathalie Maitre, an assistant professor of Pediatrics at Vanderbilt University, says she was interested in using commercially-available pacifiers that played classical music when a baby sucked, and stopped playing the music when the sucking stopped. Instead of the classical, Maitre switched out the classical tunes for something a little more familiar – the babies’ mothers singing a lullaby.

“Everyone knows that mother’s voice is a powerful stimulus for babies; babies recognize their specific mom’s voice and it has a strong effect on heart rate and breathing,” Maitre told KinderLab. “So, instead of using strangers’ voice or classical music, we wanted to let parents feel like they were doing something proactive.”

Maitre and her colleagues enrolled 94 babies born at 6 to 8 weeks early (at 34-36 weeks) in the study. Half the babies got regular pacifiers, and the other half received pacifiers modified to play mom’s voice when they sucked.

The pacifiers played “Hush Little Baby” or “Snuggle Puppy”. Maitre notes that the songs were chosen because they were easy and repetitive. When the sucking stopped, the lullaby also stopped playing. The babies were given the pacifiers for 15 minutes per day for a week.

The babies who were given the special pacifiers were able to suck more strongly, eat more frequently, and ultimately had their feeding tubes removed a week earlier than those who used the normal pacifiers. The study was published in Pediatrics this week.

Maitre says that the pacifiers are an easy intervention that can help in the NICU – but she doesn’t want people to think that the tech should be used in full-term infants at home. “This study was done by feeding specialists, to help pre-term infants feeding better. So it’s not something that should be used by everyone.”

She’s planning future studies that will look at the effects of mom’s voice on other at-risk populations.