If You’re Happy and You Know It, Baby Knows It Too

It may seem like infants are tiny blobs of burps and poop — but research is beginning to show how... 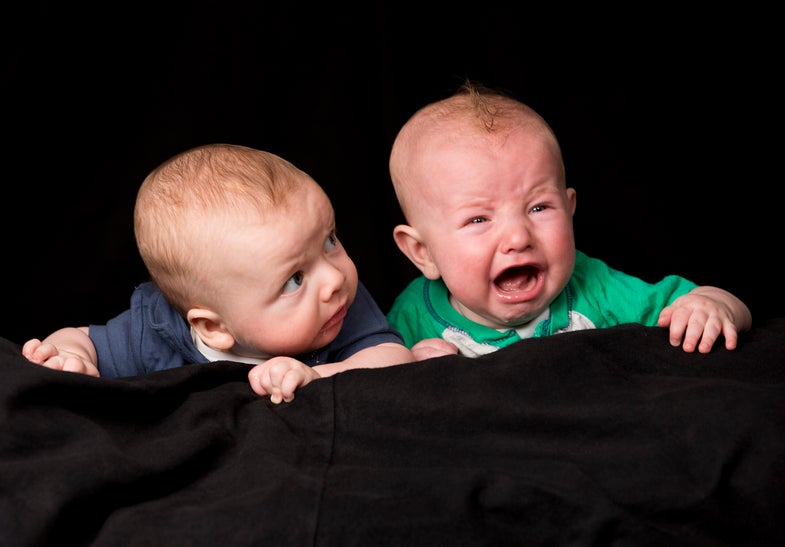 It may seem like infants are tiny blobs of burps and poop — but research is beginning to show how babies understand emotional states, from scary faces to threatening barks and sad music.

Ross Flom, professor of psychology at Brigham Young University, has looked at emotional affect and babies over a wide variety of settings. “You and I went through more development in the first two years of life than we’ll ever experience at any other point in time in our life,” says Flom. “So, in order to study development we need to understand babies.”

Infants are communicative from birth, through cries that signal they want to be picked up, they’re bored, or they’re hungry. Flom says he wanted to know how that communication process develops, and one way is through the sharing of emotion (also known as affect). “Affect is probably most easily shared form of communication between infant and adult,” says Flom – one that is shared through faces, bodies, and also through animals. Flom has shown that babies understand the emotional states of dogs and monkeys. In one study, he showed babies pictures of two different dogs and played them recordings of a friendly bark or an aggressive one (listen to the two barks for your own experiment). 6-month-old babies spent most of their time staring at the appropriate picture. Older babies usually made the connection instantly with their very first glance.

Dogs have lived alongside humans for 10,000 to 14,000 years, says Flom, so it makes sense that babies would be able to learn their cues. “Even little babies need to know whether a dog is one we want to pet or avoid.” His other studies showed that 9-month olds can discriminate between happy and sad musical excerpts and emotions on the faces of macacque monkeys.

Babies can also interpret the emotions of other little ones – something that parents can sometimes find difficult. Though babies were known to match emotions with adults they knew at 6 months, it wasn’t known if they could understand each other. Flom showed babies two monitors. One showed a video of a happy, smiling baby while the other monitor displayed video of a second sad, frowning baby. When audio was played of a third happy baby, the infant participating in the study looked longer to the video of the baby with positive facial expressions. The infant also was able to match negative vocalizations with video of the sad frowning baby. The audio recordings were from a third baby and not in sync with the lip movements of the babies in either video.

At the heart of these studies, Flom shows how communication between babies and adults is critical to survival. “Language development largely occurs in the interactions with others, and it’s not surprising that we need from birth. Sharing of affect is one of the best ways to do that.” His next studies will examine emotional memory in three-to-five-month old babies. in adults, emotional events like a first kiss or the death of a loved one are more memorable than neutral events. In babies, he’ll only test positive and neutral emotional events.