In spite of current naval tensions in East and Southeast Asia, the People’s Liberation Army Navy has been very busy … Continued 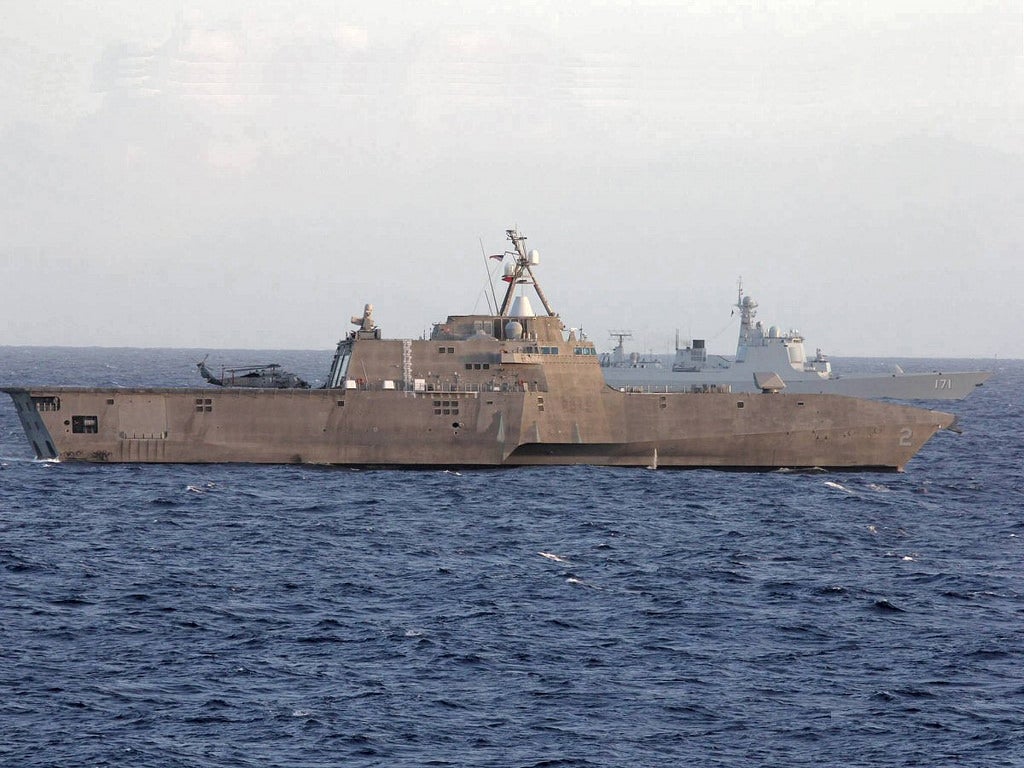 In spite of current naval tensions in East and Southeast Asia, the People’s Liberation Army Navy has been very busy representing China at the US Navy hosted RIMPAC 2014 exercises at Hawaii. Currently, the PLAN is engaged in three types of military exercises: combat hospital care, gunnery practice and maritime interdiction/hostile boarding. 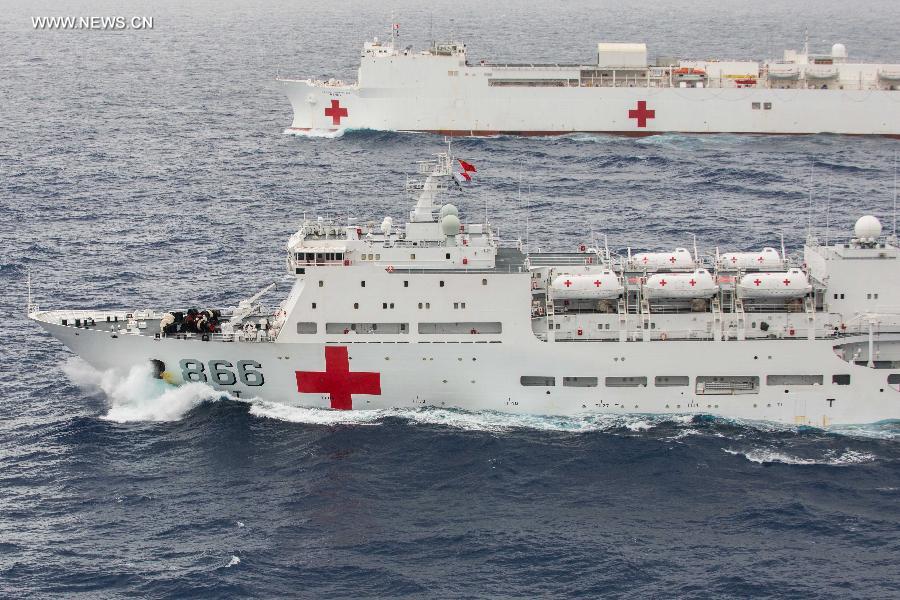 The two hospital ships at RIMPAC 2014, the USNS Mercy and the PLAN’s Peace Ark, travel in formation (the larger Mercy is located to the Peace Ark’s right). Hospital ships like these play important roles in providing humanitarian and medical assistance during natural disasters like typhoons and earthquakes. 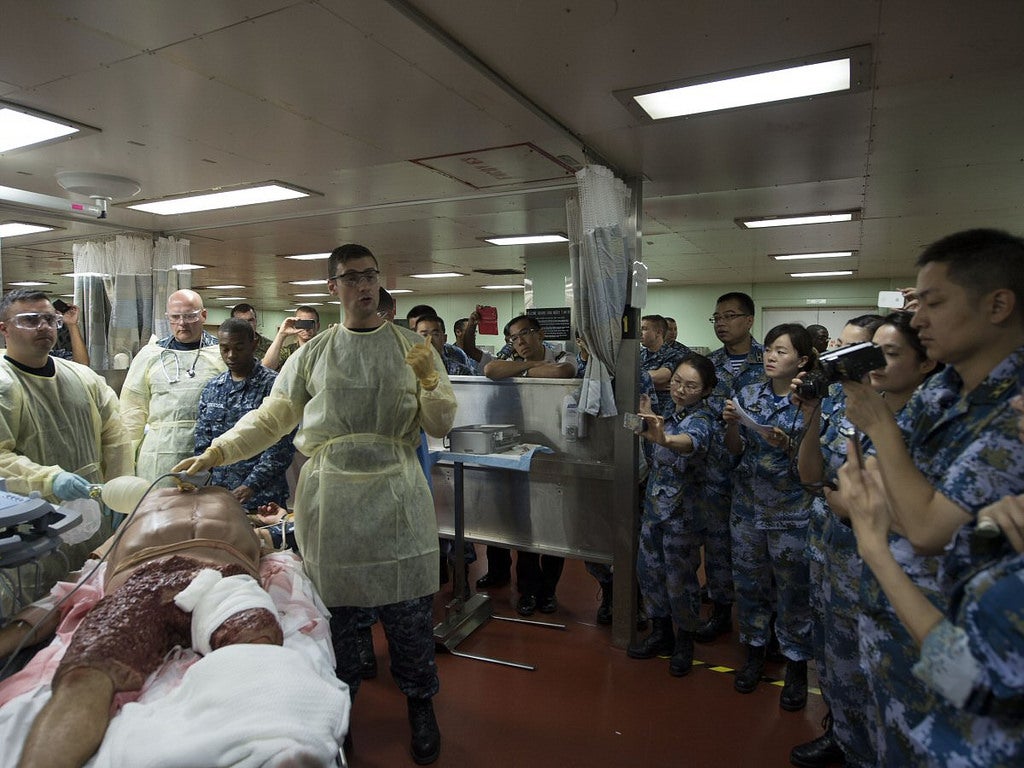 The PLAN”s Peace Ark and USNS Mercy hospital ships have perhaps seen the most bilateral cooperation, with numerous exchanges of medical personnel to share combat medicine and humanitarian relief experience. The Peace Ark and USNS Mercy are the most likely Chinese and U.S. warships to work together in the future, especially in humanitarian responses to Asia-Pacific disasters like typhoons and earthquakes.

Notably the exercises also saw the US and Chinese Navy work on their gunnery skills and boarding each others’ ships. Earlier this month, the Littoral Combat Ship (LCS) USS Independence led a formation of 11 warships, including the Luyang II class Haikou guided missile destroyer (DDG) and Jiangkai II class Yueyang guided missile frigate (FFG), in conducting gunnery practice with a variety of 57mm, 76, 100mm and 127mm cannons at target balloons. While precision guided munitions like anti-ship and surface to air missiles have become the primary tools of naval warfare, cannons are still a reliable weapon against incoming missiles and enemy speedboats. 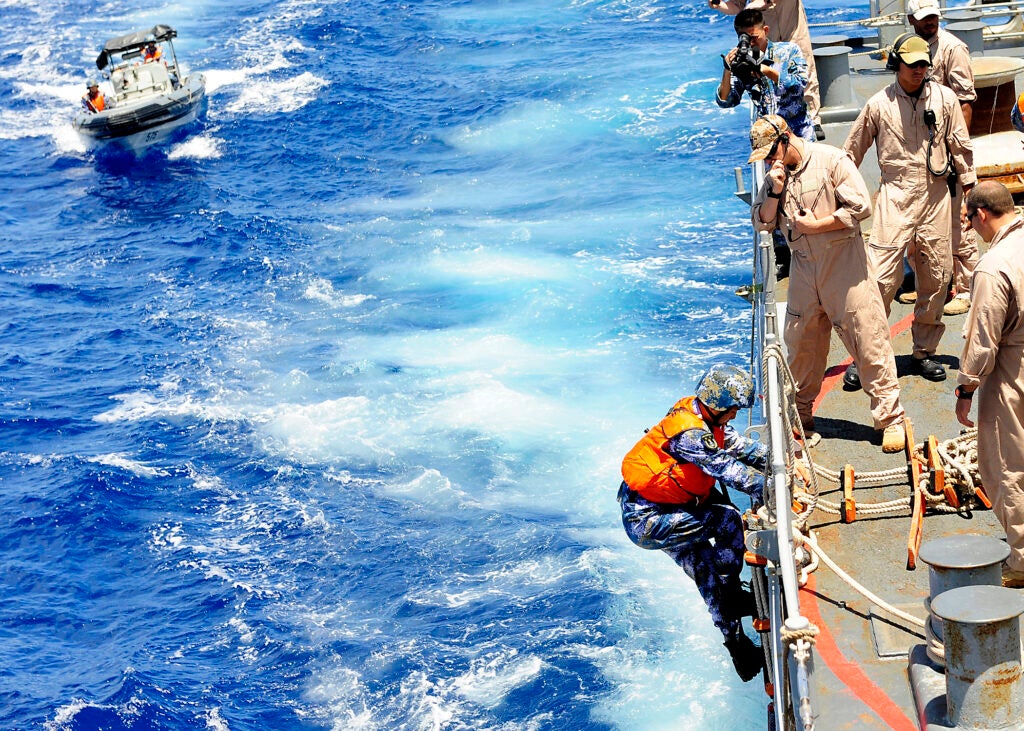 The Haikou DDG and Yueyang FFG practiced interdiction and boarding of hostile ships by sending a boat of Chinese Marines to board and search the USS Port Royal, a Ticonderoga class AEGIS cruiser. The rapid loading and launch of combat troops is a critical task in anti-piracy and counter-proliferation missions for securing vulnerable ships, as well as to deter and even fight pirates. 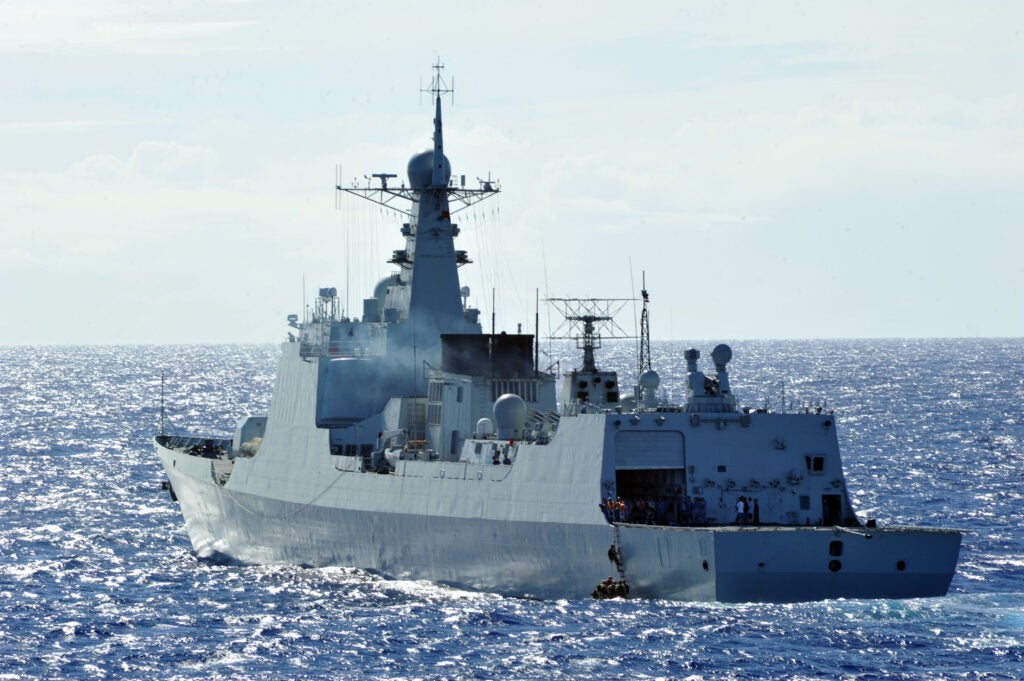 Visit, Board, Search and Seizure Detachment Four “Four Horsemen” from the USS Independence get onboard the Yueyang Frigate with weapons ready.

The USN later returned the favor when the USS Independence once again operated alongside the Haikou and Yueyang to conduct simultaneous helicopter-boat landings, where Marines use both a boat and helicopter to intercept and board a suspicious or hostile ship from sea and air. The USS Independence launched the Marines to board and land on both Chinese warships; both LCS class ships are envisioned for missions like anti-piracy. 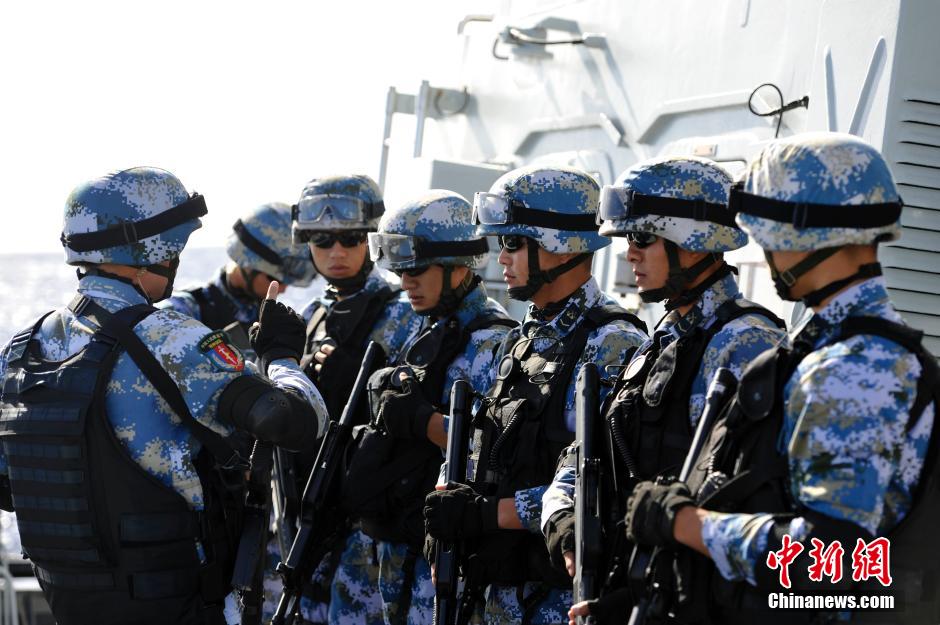 The selected PLAN Marine boarding stands at attention, before starting an amphibious boarding action of the USS Port Royal.

China’s RIMPAC participation has received significant domestic and international news coverage, including primetime coverage on CCTV news. The positive news bump was hurt somewhat when the USN noted that a Chinese electronic intelligence spy ship has been operating near Hawai’i to gather data from the RIMPAC 2014 exercise (ironically, China made noisy complaints in 2009-2010 about similar US activities in its waters). Not withstanding that potential diplomatic faux pas, the RIMPAC exercise is considered a success by both sides and the growing PLAN is expected to continue international naval exercises with the US, as it already has with Australia, India, Japan and Russia.