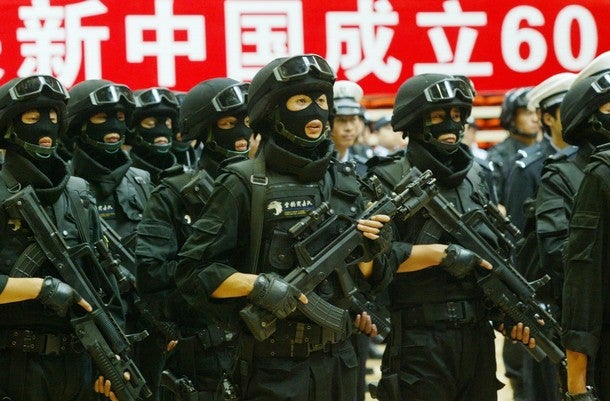 Hundreds of elite police and soldiers attend a send-off ceremony as they prepare for the security during China's 60th anniversary celebration in Beijing on June 23, 2009. China will impose even tougher security measures for the 60th anniversary of the founding of the People's Republic in October than it did for last year's Olympic Games, state media said. CHINA OUT AFP PHOTO (Photo credit should read STR/AFP/Getty Images). STR
SHARE

An English CCTV broadcast shows President Xi Jingping visiting the Falcon Commando Unit in April 2014. The Falcon Commando Unit, part of the paramilitary People’s Armed Police, specializes in counterterrorist operations including fast entry rappelling, evasive driving and pursuit, hostage rescue and close quarter combat. Of particular interest is the retired Il-86 airliner at the Falcon’s base: it is almost certainly used to train for storming hijacked airliners. Given extensive Chinese investment and expatriates in unstable areas from Central Africa to the Arabian Peninsula, the Falcons may soon appear in operations outside of China, akin to the experience of its Western counterparts.