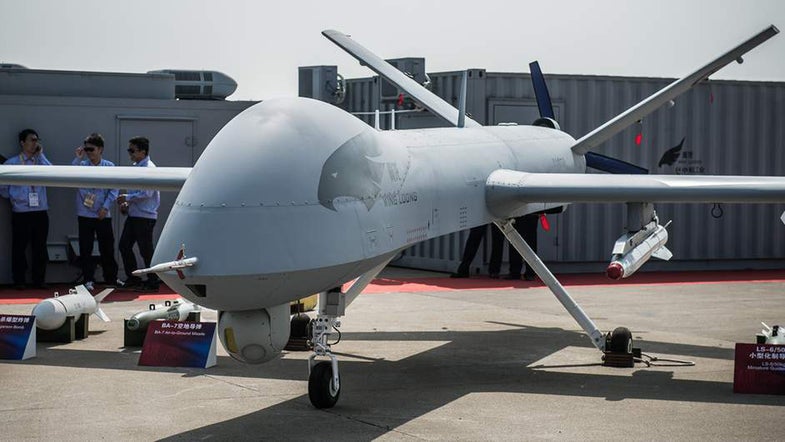 On April 19, 2104, Saudi Crown Prince Salman bin Abdulaziz meet with People’s Liberation Army Deputy Chief of Staff Lt. General Wang Guanzhong to sign a contract for an unspecified amount of Pterodactyl unmanned aerial systems ( aka drones). Also referred to as Wing Loong, the Chinese Mandarin word for Pterodactyl, the system is already serving in the PLA Air Force’s 32nd Division. The Verge notes that such a purchase shows how China is starting to compete with industry leaders the U.S. and Israel as a leading source of military robotics, especially since the U.S. has been hesitant to export UAS even to allies, especially armed types.

Such a deal is also another indication of how improving Sino-Saudi ties have moved beyond the realm of energy and trade to include major defense technology. Riyadh has already purchased several battalion sets of NORINCO PLZ-45 self propelled howitzers, while Newsweek reported in January 2014 that the CIA had facilitated a 2007 sale of Chinese DF-21 intermediate range ballistic missiles to Saudi Arabia as a first strike option against Iran. The Saudis also have been reportedly interested in other modern Chinese armaments like anti-ship missiles and long range surface to air missiles. Shown here is a ground control station for the Wing Loong UAV, with dedicated consoles each for the pilot and weapons/sensors officer. The Wing Loong is usually restricted to operating within range of ground based communications, but as the Chinese communication satellite constellation grows, the Wing Loong could be operated across continents, like its American counterparts, the Reaper and Predator.

The Wing Loong UAV is similar in size and mission to the American Predator, and comes with more permissive export and usage restrictions.

The 1,100 kg Wing Loong is about the same size as the American MQ-1 Predator and can fly for over 4,000 kilometers in 20 hours. Its 200kg payload of armaments and sensors includes two laser guided KD-10 ground to air missiles (similar to the Predator’s Hellfire Missiles) or two 50 kg LS-6 satellite guided bombs. The Chengdu Aviation Corporation has previously exhibited the Wing Loong at the 2010 and 2012 Zhuhai Air Show, and also at the February 2014 Singapore Air Show. The United Arab Emirates had reportedly purchased the Wing Loong in 2011, though the first examples had heating problems in the desert climate. The Saudis are likely to make use the Wing Loong against Al Qaeda in the Arabian Peninsula, and Yemeni Houthi rebels, meaning what many consider a Predator knockoff will soon be operating in the same locales as the original.