Five months after the first pictures surfaced in February 2014, the Type 055 cruiser testing rig at Wuhan has taken...

The eleven barreled Type 1130 CIWS is located on the raised platform forward of the bridge, and behind the H/PJ-38 turret. This Gatling cannon is one of the fastest guns in the world, firing up to 10,000-11,000 rounds per minutes to destroy high supersonic (Mach 4) missiles. spiderman via lt.cjdby.net
SHARE 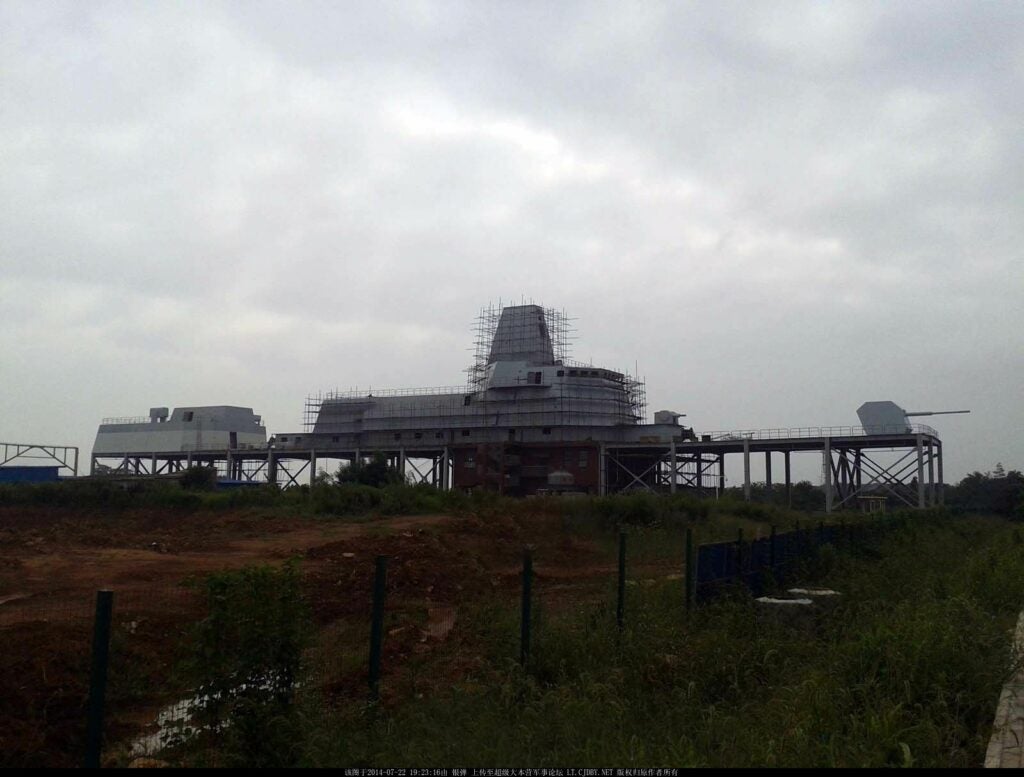 The 055 cruiser test bed is a step closer to completion, as seen in the portside (left) view. The main cannon, CIWS and FL-3000 missile launcher have all been installed, and the helicopter hangar is complete.

Five months after the first pictures surfaced in February 2014, the Type 055 cruiser testing rig at Wuhan has taken significant steps towards completion. The advantages of a land based test rig allow Chinese naval engineers to make cheaper adjustments and modifications to the electronics, compared to rebuilding an expensive cruiser on sea trials. Once launched, the Type 055 cruiser will be among the world’s most powerful surface combatant warships, giving the People’s Liberation Army Navy (PLAN) a multipurpose warship useful for both blue water expeditionary warfare and anti-access/area denial missions.

A closer view of the 055 test rig shows that the sensor and communications array panels on the integrated mast remain empty, while the H/PJ-38 turret and Type 1130 CIWS are almost certainly mockups meant to simulate radar returns, given the lack of loading and turning mechanisms beneath the deck. 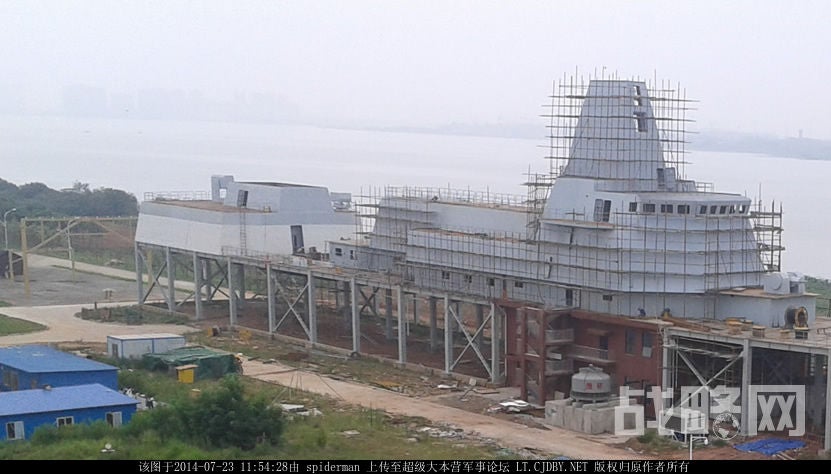 The integrated mast of the 055 cruiser test rig, on top of the bridge, is still empty. The fact that the portside (left facing front) of the integrated mast lacks openings for sensors, compared to the front and side of the integrated mast, suggests that port side sensors may have been deleted from the test rig as a cost saving measure (generally, one only needs sensors from two sides of a warship to simulate interaction among its electronic equipment).

While much scaffolding remains, the photos show recent additions include a 130mm H/PJ-38 cannon turret (or a mockup, given the current lack of ammo loading machinery beneath the deck) at the bow. One Type 1130 close in weapons system (CIWS) is located in front the of the bridge superstructure on a platform behind the PJ-38 main gun (the space between the PJ-38 and Type 1130 CIWS would hold 64-72 vertical launch system (VLS) cells). The Type 1130 can fire around 10,000 rounds of two pound shells to intercept missiles flying at Mach 4. To round out the Type 055’s defense armament, a HQ-10 air defense launched has been installed in the rear above the helicopter hangar. The gap forward of the hangar and behind the exhaust stacks could hold an additional 48-64 VLS cells.

The eleven barreled Type 1130 CIWS is located on the raised platform forward of the bridge, and behind the H/PJ-38 turret. This Gatling cannon is one of the fastest guns in the world, firing up to 10,000-11,000 rounds per minutes to destroy high supersonic (Mach 4) missiles. 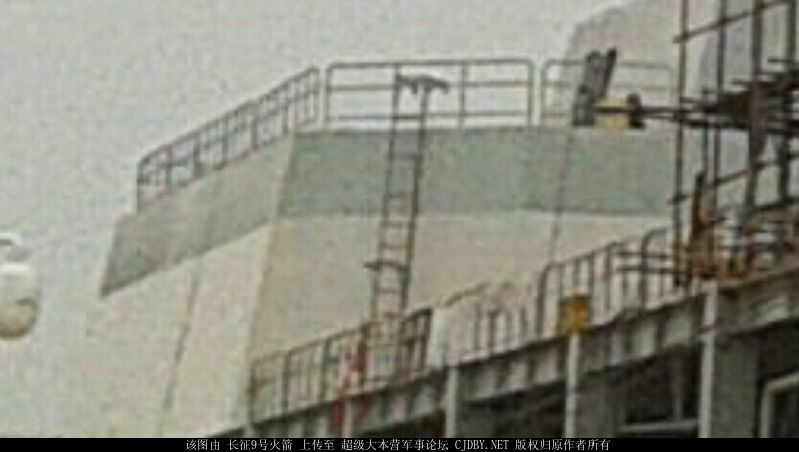 The Type 055’s hangar is a new addition compared to earlier pictures from March. It will house an array of helicopters like the Ka-28, Z-9 and Z-20, as well as future Chinese vertical takeoff UAVs.

The integrated mast and the rest of the test rig have received a coat of standard PLAN grey paint. However, the empty gaps in the stealthy integrated mast show that various fire control radars and communication arrays remain to be installed. Meanwhile, the stern of the mockup has seen the completion of its helicopter/UAV hangar, which will primarily be used in anti-submarine warfare operations. 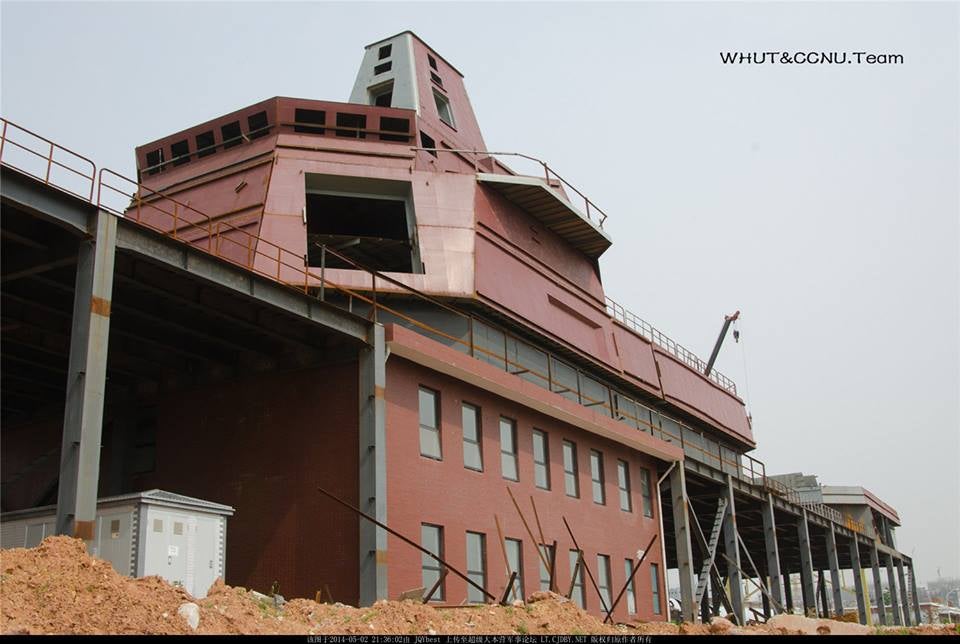 This photo from March 2014 shows the 055 Cruiser test rig without radars or weapons mockups. The large opening under the bridge is for the massive Type 346 series AESA radar. It is unlikely that the 055 test rig currently has the Type 346 installed, seeing that the integrated mast as of July 23, 2014, is still missing its sensor arrays.

However, the most important part of the Type 055 mockup has yet to come in the form of radar and other electronic equipment installation. The photos show that the front portside (left) Type 346 radar has not been installed yet beneath the bridge (allowing the possibility, though, that the starboard side radars has already been installed). Given the lack of radar portside openings on the mockup, it appears that sensors, especially radars, will only be installed on the starboardside and front of the test rig (generally, only two sides need functional electronics to test out sensor performance and interaction on a warship). Installing the electronics of the Type 055 will be crucial to establishing baselines to understand interactions between electromagnetic activity from the sensors, electronic countermeasure (ECM)defenses and communications gear. Judging from the rate of progress in the past several months, it would be reasonable to assume that all sensors, ECM, and communications will be installed by fall this year, allowing the PLAN to immediately start using the test rig. At this pace, we should expect the first 055 hull to begin construction in the 2015-2016 timeframe.

The Next New Major Chinese Warship Arrives, On Land