Fresh off its victory in the Special Forces “Olympics”, the PLA has also signed up for the Russian Tank Biathlon,... 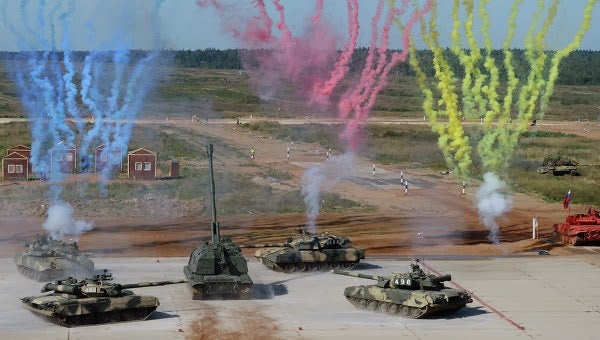 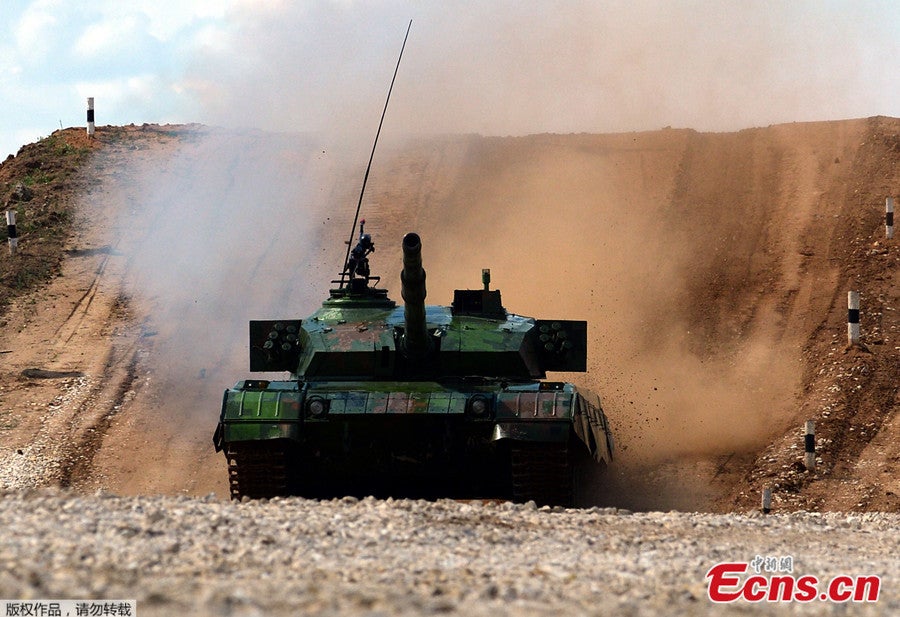 A ZTZ-96A MBT makes the rounds in Alabino, Russia. The Chinese participation in this year’s Tank Biathlon is part of a trend in hiigher Chinese military to military exchanges every where from Hawaii to Russia to Africa and the Middle East.

Fresh off its victory in the Special Forces “Olympics”, the PLA has also signed up for the Russian Tank Biathlon, a competitive sport for main battle tanks. This year, 12 nations are participating in the Second Annual Tank Biathlon; Angola, Armenia, Belarus, China, India, Kazakhstan, Kuwait, Kyrgyzstan, Mongolia, Russia, Serbia and Venezuela. NATO members like the U.S., Germany and Italy were scheduled to attend but recent Ukrainian tensions have put such exchanges into deep freeze. The Biathlon is held at Alabino, a village and military base that also serves as the marshaling ground for Russian Victory Day parades. 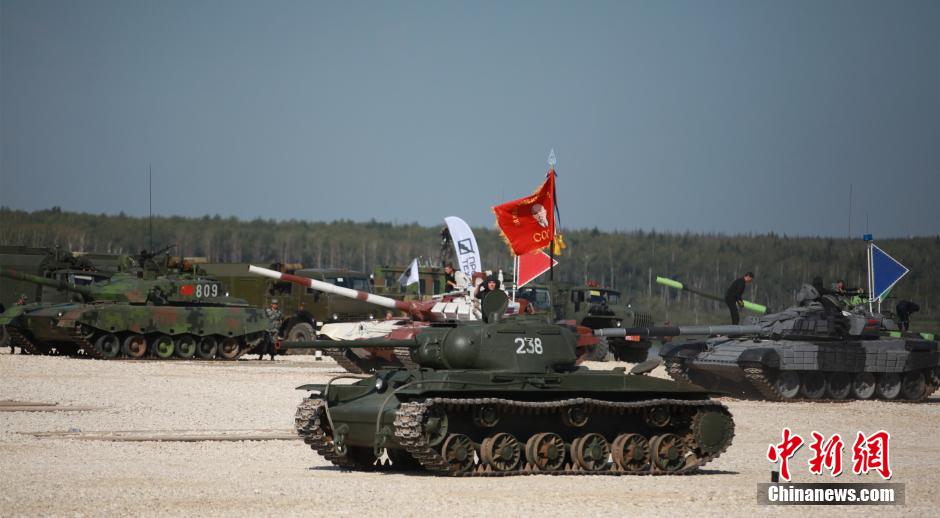 The Biathlon opening ceremony including a parade of historical Soviet armored vehicles, like this KV series heavy tank from World War II. A ZTZ-96A and T-72B can be seen in the background 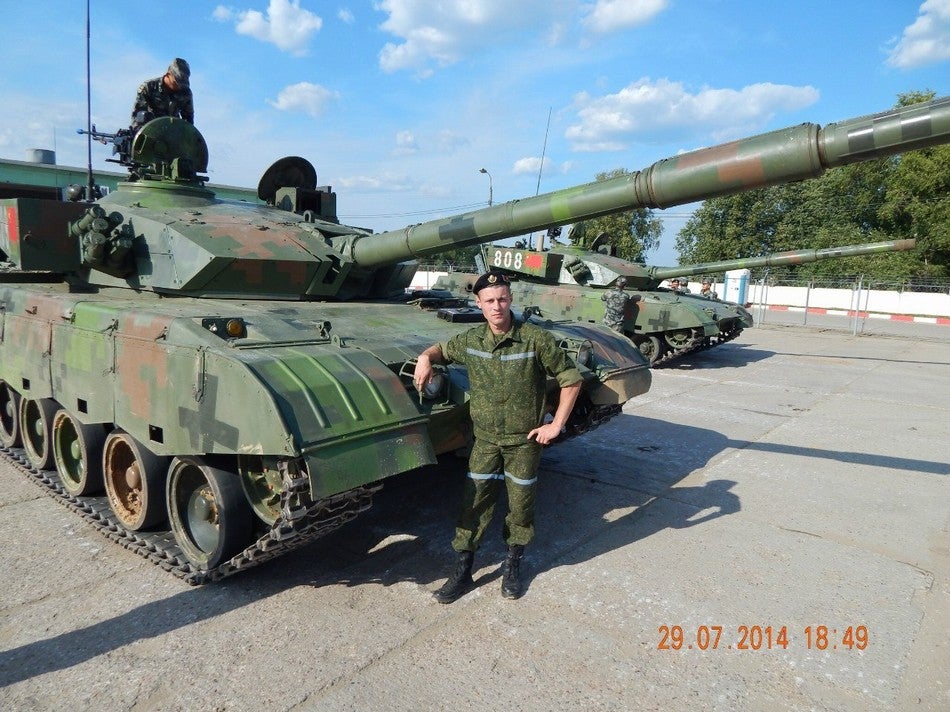 A Russian soldier takes a photo op with a Chinese ZTZ-96A main battle tank just as the Chinese delegation arrives in late July for this month’s Biathlon.

The Chinese delegation has brought four 50 ton tanks ZTZ-96 main battle tanks, compared to the other nations, which use 44 ton T-72Bs provided by Russia. While the ZTZ-96’s weight was given at 42.8 tons for the 2009 Chinese National Day Parade, the 50 ton weight given by the Biathalon organizers could reflect improved armor and sensors. China likely brought the smaller ZTZ-96 MBT instead of the larger ZTZ-99 because the ZTZ-96 is the Chinese tank closest in weight to the T-72. For their part, Russian organizers likely chose the T-72 because its ubiquity means that all of this year’s participants (sans China) are familiar with its operation (Russia also provided 6 weeks of training on the T-72B). Unfortunately for the Chinese team, one of their ZTZ-96s suffered a thrown track and had to be replaced with a spare. 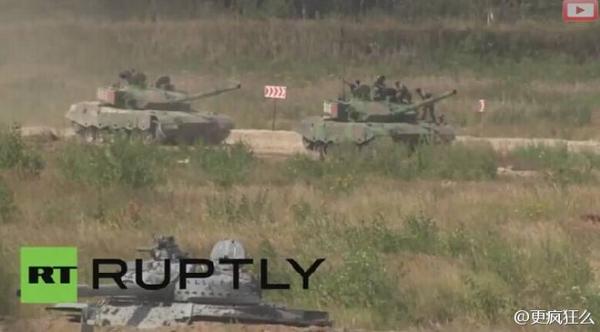 After the ZTZ-96A in the rear throws a track, the Chinese team quickly changes into the replacement tank in the front, to successfully complete the 20km sprint and live fire target practice.

The biathlon consists of three events. The first stage, held from August 4-6, is a 20km run through an ‘obstacle course’ of rough terrain that includes rivers, steep slopes, and rocky ground. At the end of that 20km run, the competing tanks must successfully hit 12 targets (for each missed target, the offending tank has to take a penalty lap). The second stage involves a 3 km “sprint”, while the third and final stage is “pursuit” (presumably chasing other tanks). So far, Russia won the first and second heats out of three, in the first stage (each heat has one tank from each nation). The top prize of the Biathlon will be a Russian UAZ Patriot SUV. 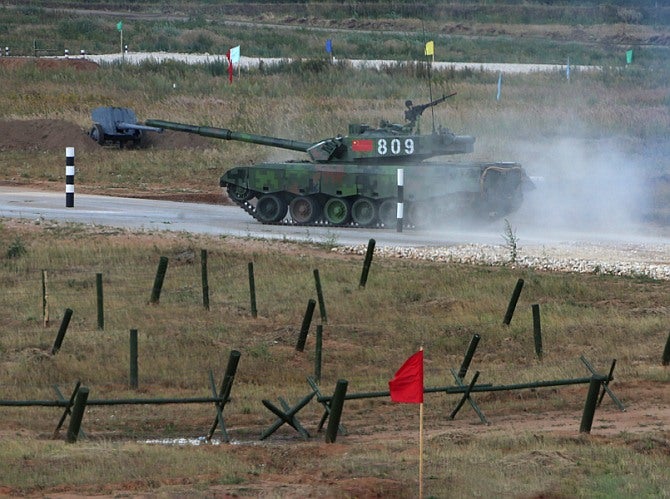 A ZTZ-96A tank speeds away into the 20km obstacle course of the Tank Biathlon in Russia.

In the spirit of the Biathlon’s Olympic like atmosphere, the Russian Army put on a display of “waltzing tanks” driving in a ballroom dance formation. During the opening ceremony, Russian hosts also paraded the a series of World War II armored vehicles like the T-34 tank and Su-76 assault gun, as well as modern artillery like the S219 self propelled howitzer and displayed the Tor and Osa short range surface to air missiles. For the hardcore fans of the Tank Biathlon, RT has put up a 3 hour long Youtube video of highlights from the ceremony.

China and US Trade Naval Expertise at RIMPAC 2014 Wargames