Starting on May 20th, six Russian warships from their Pacific Fleet have joined with the People’s Liberation Army Navy (PLAN)... 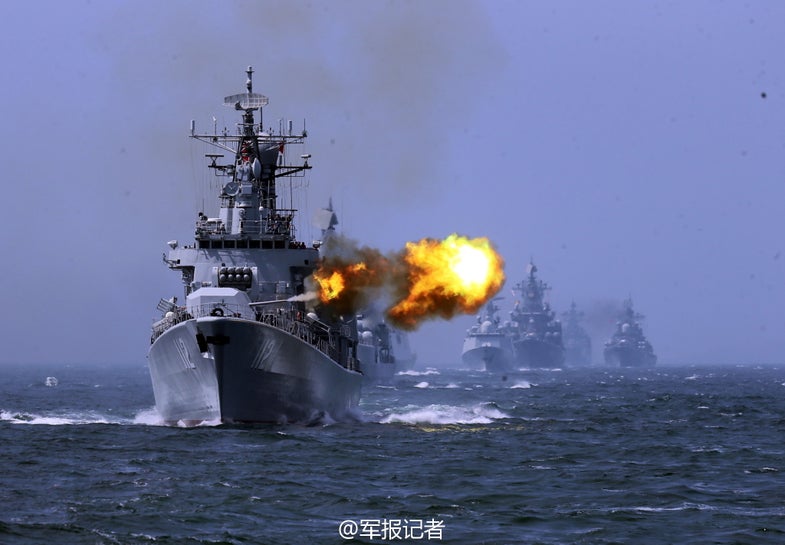 The respective prides of their commands, the Russian Pacific Fleet’s Slava class Varyag cruiser (left) and Type 052C class Zhengzhou destroyer (right) from the Chinese East Sea Fleet, are docked side by side at the PLAN base in Wusong, near Shanghai. The Varyag carries 16 P-500 heavy anti-ship missiles, while the Zhengzhou is close in air defense capability to some AEGIS warships.

Starting on May 20th, six Russian warships from their Pacific Fleet have joined with the People’s Liberation Army Navy (PLAN) to conduct Joint Sea Drill 2014, the third major Sino-Russian naval excerise time in as many years. Joint Sea Drill 2014 comes at a crucial time for both China and Russia, as both are experiencing increased tensions with their neighbors such as Japan, Ukraine and Vietnam. 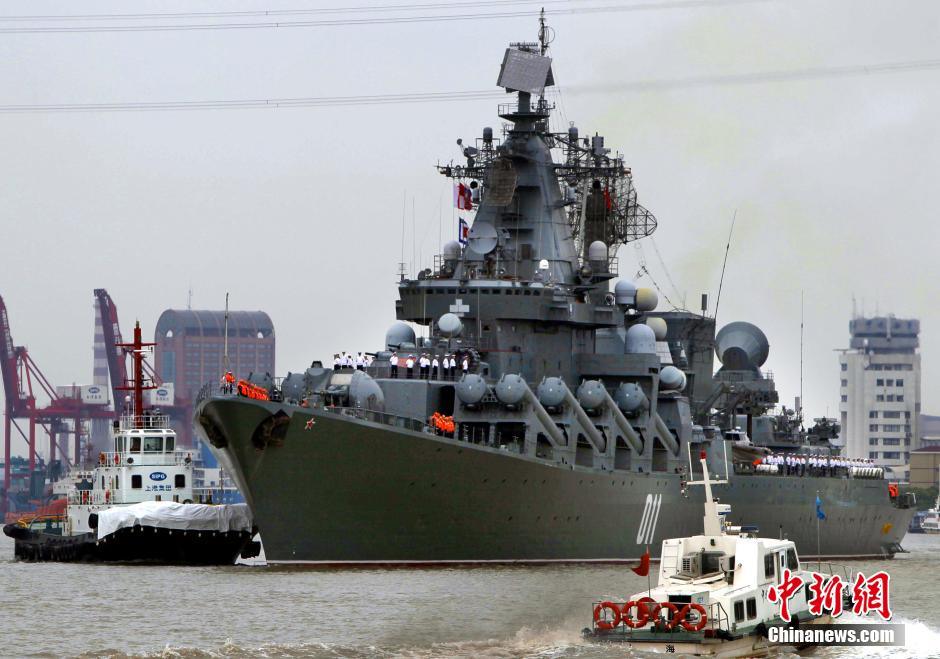 The Varyag cruiser, armed with 90 long range anti-ship and surface to air missiles, is the flagship of the Russian Pacific Fleet and headed the Russian Naval complement to Joint Sea Drill 2014.

The Slava class cruiser Varyag, flagship of the Pacific Fleet, is leading the Russian taskforce. Other Russian warships include the Udaloy II guided missile destroyer (DDG) Admiral Panteleyev, Sovremenny class DDG Bystryy and Ropucha class landing ship Admiral Nevelskoy. The PLAN’s contribution to the exercise will be eight warships, including the Sovremenny class DDG Ningbo, Luyang II Type 052C DDG Zhengzhou, and Jiangkai II Type 054A frigate Yantai. Additionally, nine fixed wing maritime patrol, bombers and six anti-submarine helicopters will take part in the exercise. The presence of anti-submarine, refueling and amphibious assault platforms indicates that the exercise will be focus on long distance, multirole expeditionary operations that includes anti-submarine warfare, area air defense and amphibious landings. While those modern naval skill sets are vital to the success of any blue water navy, neither the modern Chinese nor Russian navies has much recent experience in those tasks. In theory, combining disparate national naval strengths like Chinese electronically scanned radar and Russian anti-submarine warfare technologies would provide shortcuts towards far greater proficiency in naval missions in support of anti-access/area denial operations. 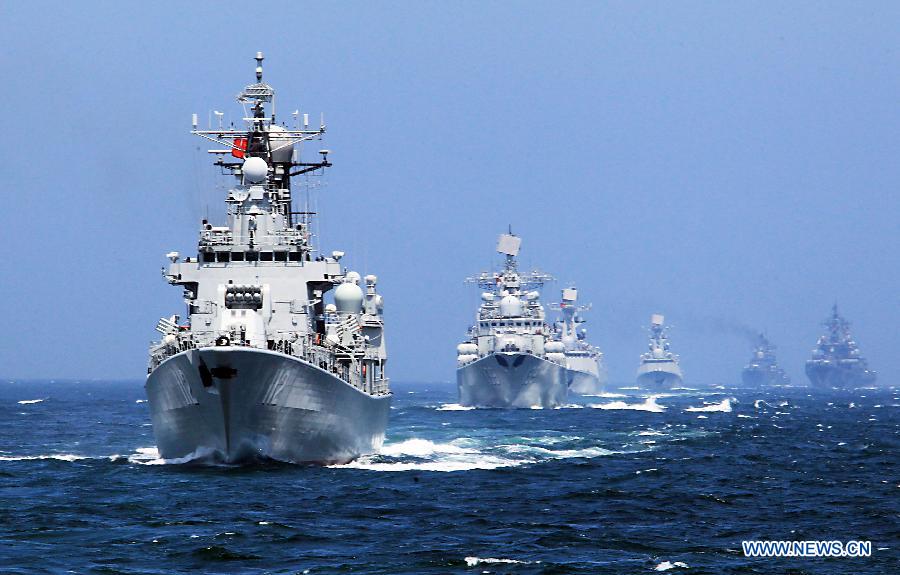 Four PLAN warships lead the formation followed by two Russian Navy warships in the background (they can be distinguished by their dark grey paint schemes). Sailing in a single integrated column at high speeds in live fire exercises requires trusted joint communications and control capability between the two navies.

The geographic scale of the event is also notable. May 21 to 25, 40,000 square kilometers of East China Sea airspace for the Joint Sea Drill 2014 has been restricted against civilian air traffic and non-participating militaries. The northernmost point of no fly zone happens to be roughly equidistant from Shanghai and Nagasaki, as well as being 200 kilometers south of Jeju Island, South Korea. 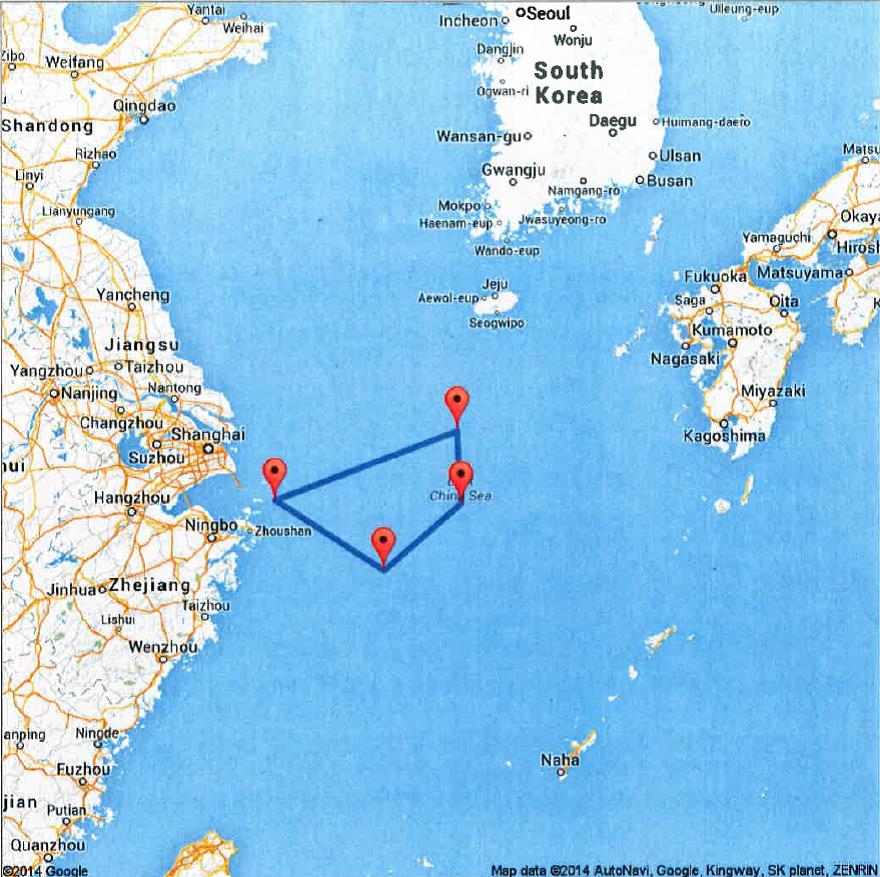 The No Fly Zone for Joint Sea Drill 2014, set by Chinese maritime and aviation security authorities, closed off around 40,000 square kilometers of East China Sea airspace from May 21 to May 25. On May 24, Chinese J-11 fighters intercepted two Japanese intelligence gathering aircraft.

The geopolitical implications of bilateral military show that Sino-Russian military cooperation is further increasing beyond simple arms exports and more towards strategic military cooperation and joint research projects like the COMAC-UAC jumbo jet collaboration. While Russian natural gas exports to China are still up for grabs, China is already largest single nation source of Russian imports and China’s importance as vital market for Russian natural resources has only increased after the new EU-US sanctions on Russia. The fact that this year’s naval exercise takes place amidst Russia-NATO tensions and escalated Chinese maritime disputes with Japan and Vietnam shows that both Putin and Xi view Sino-Russian security cooperation as a strategic priority for their nations. 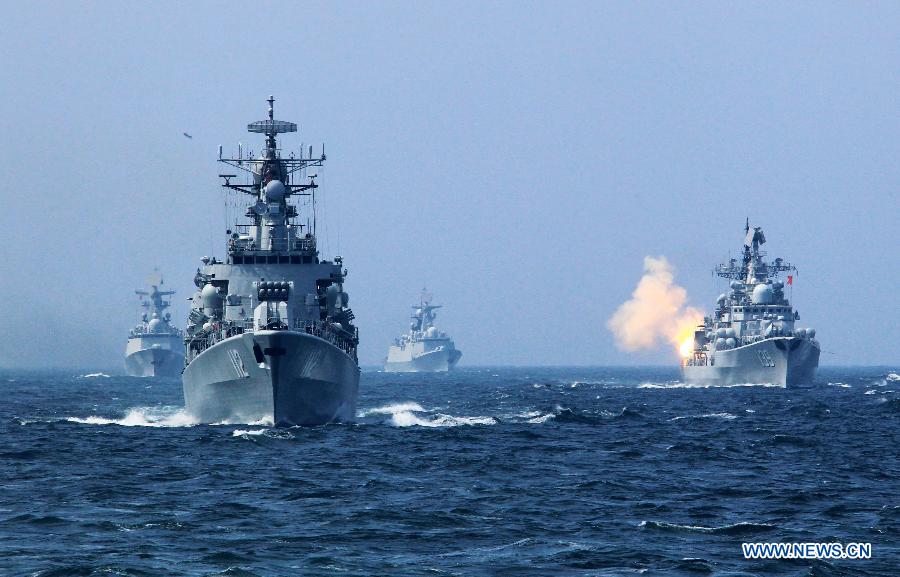 The Sovremenny class destroyer Ningbo (delivered from Russia to China in 2006) fires anti-submarine rockets. Anti-submarine warfare (ASW), long a weakness of the PLAN, could be mitigated by continuing Chinese exposure to Russian technology and experience in that field.

At the closing ceremony on May 26, the PLAN and Russian Navy commanders, Vice Admirals Tian Zhong and Alexander Fedotenkov, had only good things to say about Joint Sea Drill 2014. Fedotenkov, according to ITAR TASS, remarked that the fire, manuvers and resupply of the “unified squadron” was a signficant step forward in joint command and control, organization and planning. Vice Admiral Fedontenkov also remarked that future Sino-Russian naval exercises and other military activities would also involve the Russian Baltic, Black Sea and Northern Fleets, as well as Russian long range missile units and Chinese naval aviation. Fedeotenkov also snarked about “harassment from a third country”, the third country is undoubtedly Japan, given that Chinese fighters intercepted two Japanese surveillance planes near the no fly zone on May 24. Given the political and operational success of Joint Sea Drill 2014, Chinese naval presence in Russian waters in troublespots of the Arctic Ocean, Baltics, Black Sea and Mediterranean is now a likely possibility. 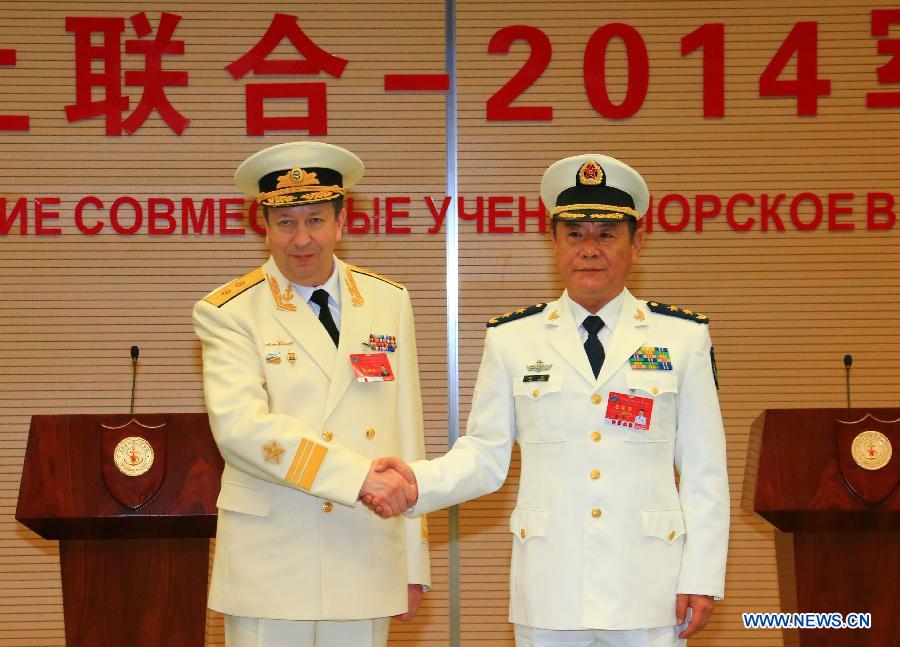 In the future, further Sino-Russian naval exercises could include capabilities like Chinese and Russian carriers, Type 055 guided missile cruisers, and Mistral amphibious warfare ships. At the same time, signs of an operative Sino-Russian naval alliance would include systematic developments like large scale joint training and military education, intelligence sharing, coproduction of naval systems such as large surface warships, nuclear attack submarines and maritime intelligence collection. Currently there is little evidence to suggest that such a naval special relationship is occurring at such a deep level. But as both countries grow closer, and see increased U.S. presence in their “near aboard,” such a special relationship could become more attractive.