Project: Bee Hunt! Bees! Sometimes feared and sometimes revered, they are vitally important to agriculture. According to the American Beekeeping... 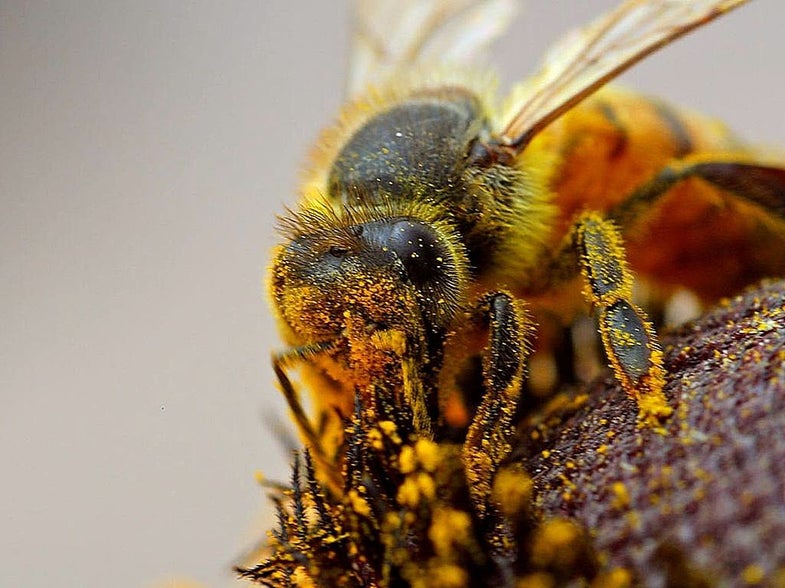 Bees! Sometimes feared and sometimes revered, they are vitally important to agriculture.

According to the American Beekeeping Federation, bees help to pollinate apples, cranberries, melons, and broccoli. Other crops, such as blueberries and cherries, are almost entirely dependent on honey bee pollination, while almond trees are 100% dependent on honey bees for pollination. And according to the California Department of Food and Agriculture, almond sales were $4.35 billion in 2012. Yes, that’s billion with a ‘b.’

Unfortunately, bees are in serious trouble. For several years now, “colony collapse disorder” has been decimating hives throughout North America. Some 12 million bees died in just one county in Florida in 2011, while more than 37 million bees died in one operation in Canada in 2013.

No one quite understands why. Although a recent spate of studies have suggested that pesticides containing neonicotinoids are the main culprit, other factors might be at work too, including mites, fungi, viruses, and a loss of genetic diversity in industrial apiculture. Last year’s brutal winter won’t have helped much either.

With so much at stake, for our economy, as well as for the environment, scientists want to learn as much as they can about bees and other pollinators. The Discover Life organization is just one organization contributing to research with the Bee Hunt! citizen science project.

With Bee Hunt!, participants are asked to head outdoors with a camera to help document pollinators. After a quick round of photos to help pinpoint location, date and time, the habitat, the cloud cover, and any landmarks, another round of photos help inventory a particular patch. You’ll take pictures of the butterflies, skippers, bees, wasps, flies, beetles, aphids, spiders, spittlebugs, caterpillars, and finally ladybugs.

“With information from other sources,” notes the Bee Hunt! website, “[the photos] will help us understand at regional and continental scales how species respond to weather patterns, invasive species, pollution, and other important factors.”

The website allows users to maintain a personal photo album to hold their work, and of course, users can view other albums to see how other participants shoot images.

Check out the video for more information.

Bee Hunt is funded by the U. S. Department of Interior’s National Biological Information Infrastructure and by the National Science Foundation.