Waiting For the Tar Ball to Drop

Hidden in plain sight in the Parnell Building at the University of Queensland, Australia, sits the world’s oldest continually running... 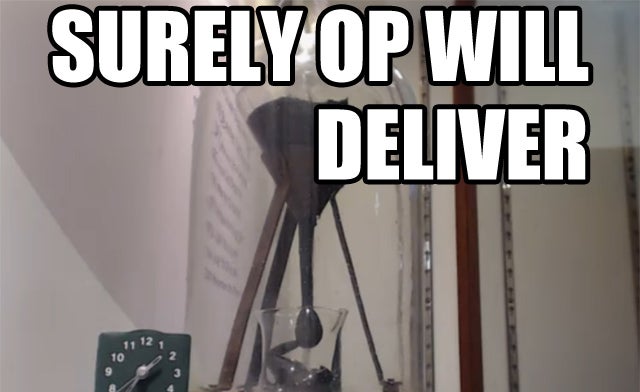 Hidden in plain sight in the Parnell Building at the University of Queensland, Australia, sits the world’s oldest continually running experiment*. Inside a plain glass display case, sits an innocuous bell jar, which in turn houses an equally nondescript funnel filled with a black liquid. The liquid (which may not be an apt moniker depending on your definition) is tar pitch, or bitumen, and that’s where the mundane properties stop. At room temperature, pitch looks solid. In fact, it can be shattered with a hammer. But it actually flows at a rate of approximately one drop every 10 years.

The experiment was set up by UQ physics professor Thomas Parnell in 1927 as a way to demonstrate and measure the material’s extreme viscosity. Since the start of the experiment, it has since dripped 8 times. The 9th drop is slated to fall any day now.

Also peculiar (or frustrating) is that nobody has yet to see a drop fall. It’s true, while a version of the experiment set up at Trinity College in 1944 was recently filmed in the midst of a drip, if you’re happy watching such a momentous event through a webcam instead of in person… well, you’ve come to the right place.

UQ has set up a new website called** The Ninth Watch**, which invites the world to sign up and watch the famous experiment, in the hopes of catching it drop. If you happen to be logged in when the new drop falls, your name will be entered into the history books along with everyone else who is way too into amorphous solids. There are a little over 6000 registered so far, with anywhere from 150 to 300 viewing at any given time.

If you’re not into watching pitch flow, there are opportunities for surreptitious people watching via the reflection in the display case glass. At the time of writing this post, a young woman was eating what appeared to be chicken while listening to her iPod.

Learn More About the Pitch Drop >>

* Sadly, the Beverly Clock and Oxford Electric Bell both lost this title due to interruptions.