A new internal transmission makes it easy to ride hard 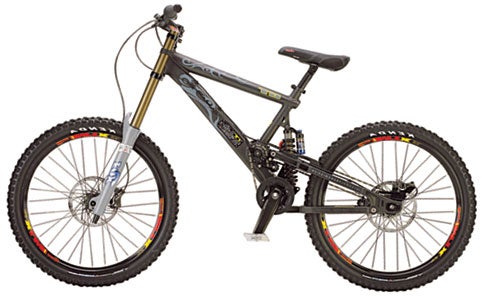 by Courtesy of GT Bicycles

In the evolution of ride-over-anything mountain bikes, the ever-vulnerable rear derailleur–that gangly parallelogram that shifts the chain up and down the rear cogs when it´s not clogged with mud or bent by rocks–has been a glaring technical handicap. So GT (gtbicycles.com) got rid of it. With its $5,000 IT-1, GT moves gear-changing duties to an unsullied haven inside the bike frame, by way of an eight-speed internal transmission. By using an internally geared rear hub and moving it to the center of the bike, GT created a more stable center of gravity and a stronger rear wheel. This also puts the drive chain in line with the suspension’s primary pivot, essentially neutralizing the chain’s effect on the suspension, so that when you pedal you’re not fighting the movement of the rear end. Intended for a niche of “freeriders” who jump off 10-foot dirt cliffs and pedal over elevated, hand-built teeter-totters, the IT-1 is durable and heavy, at 45 pounds. If you can’t handle it, just wait: This is merely the first mass-market iteration of what looks to be the future of dual-suspension designs.

How It Works
At the heart of the IT-1’s design is Shimano’s new Nexus 8 hub [A]. As you pedal, the chain on the right side of the bike [B] turns the hub’s axle, engaging its internal gears. (You shift from the handlebar as you normally would, lengthening or shortening a cable attached to the hub.) The cog on the left side of the axle [C] turns a second chain [D] that drives the rear wheel. The hub’s internal gearing determines the speed of this chain.