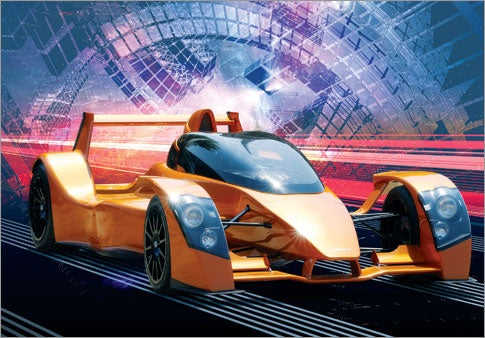 Caparo’s T1 is street-legal only in the U.K. To be sold in the U.S., it needs crash-testing and airbags.

Wanna buy a racecar? No problem, I know a guy. Two, actually–veteran
engineers from the renowned McLaren supercar shop. Their new company, Caparo Vehicle Technologies, has designed the first affordable, street-legal racecar: the $300,000 Caparo T1. Sounds steep, until you consider that a used F1 pro racecar goes for about a million bucks–a transmission that can handle the engine’s 900-plus horsepower costs $70,000 by itself.

Caparo avoids the expense of generating massive amounts of power by focusing on making the T1 light instead. Its 480hp engine (using a $13,000 gearbox) can blast the car to 60 mph in less than 2.5 seconds and top out at 205 mph. Getting the T1 street-ready required only proper lights and noise and emission controls. Safety wasn’t a problem because, like most racecars, the T1’s carbon-fiber body is designed to protect the riders in 200mph crashes.

But that doesn’t mean you’ll want to run errands in it. Controlling the ultrasensitive steering and speed-eager engine is physically draining at neighborhood speeds. “It’s so powerful,” says co-creator Ben Scott-Geddes, “that it’s pretty grueling under 100 mph.” Better hold on to the minivan.