Scientists Gave Beetles An Extra Eye By Deleting Their Horns

What have we wrought? 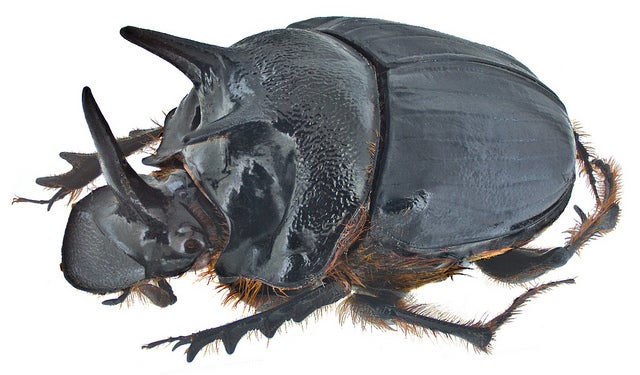 In a feat of freaky genetics, scientists have created beetles with extra eyes where their horns used to grow.

Switching off the orthodenticle genes of most invertebrates and mammals would result in a headless creature. But when Indiana University researchers deleted the genes in horned dung beetles, a complex eye formed in its place.

“We were amazed that shutting down a gene could not only turn off development of horns and major regions of the head, but also turn on the development of very complex structures such as compound eyes in a new location,” study lead Eduardo Zattara said in a statement. “The fact that this doesn’t happen in Tribolium is equally significant, as it suggests that orthodenticle genes have acquired a new function: to direct head and horn formation only in the highly modified head of horned beetles.”

These findings were published in tandem with research led by Hannah Busey, an undergraduate student researcher at IU Bloomington, which studied how small patches of skin removed from heads of larval beetles grew back as adults. They were then able to map which genes to target by tracking how the head was reorganized during metamorphosis. It solves an important “chicken-and-egg problem” for developmental biologists, and how activating genes at the right place and time could change functions — or create totally new ones, as this horn-turned-eyeball shows.

The question remains: What ulterior motive could they have for developing cyclops beetles? We’ve already equipped them with backpacks for remote control and studied them for better toxin-blasting technology. Are they building an army of extra-eye-possessing, drone-striking, venom spraying super insects? It’s a slippery slope from here to Big Bad Beetleborgs.