For the helmet-haters: a soft beanie lined with elastic polymers that stiffen upon wipeout 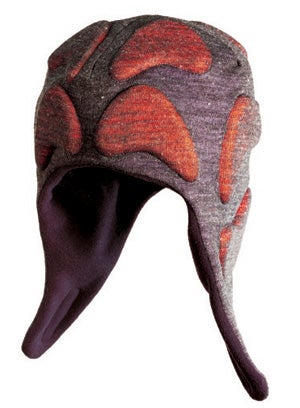 Nineteen-year-old expert skier Janne van Enckevort was told that this cap would harden when his head struck the ice. To make sure, he removed the spongy pads lining the hat, crumpled them into a ball, and then smashed them against the floor. The ball stiffened upon impact, then quickly softened again.

The protective pads morph because they are made of a material called d3o. Engineered by a British company of the same name, d3o is an elastic polymer that tenses in response to quick movements. “It doesn’t protect you as much as a hard helmet,” cautions Swiss entrepreneur Jurg Ramseier, who released the first Ribcap last November. “It’s for people who don’t like to wear helmets.” Van Enckevort, for example, uses a helmet in the park but prefers his 9.5-ounce beanie on the rest of the mountain.

Ribcap’s Hendrix model is expected to hit U.S. stores in October. Eventually you’ll see d3o in everything from skateboarding shoes to bulletproof vests.

How it Works:
Elastic polymer pads inside the Ribcap create a soft shell. Smack your head, and the shock causes the molecules inside the padding to tightly bond, forming a structure that resembles a chain-link fence. This stiffening helps absorb and redistribute the force of the impact. Check the d3o site for a video of the molecules in action.