Bat Bot flies through the air on whisper-thin wings 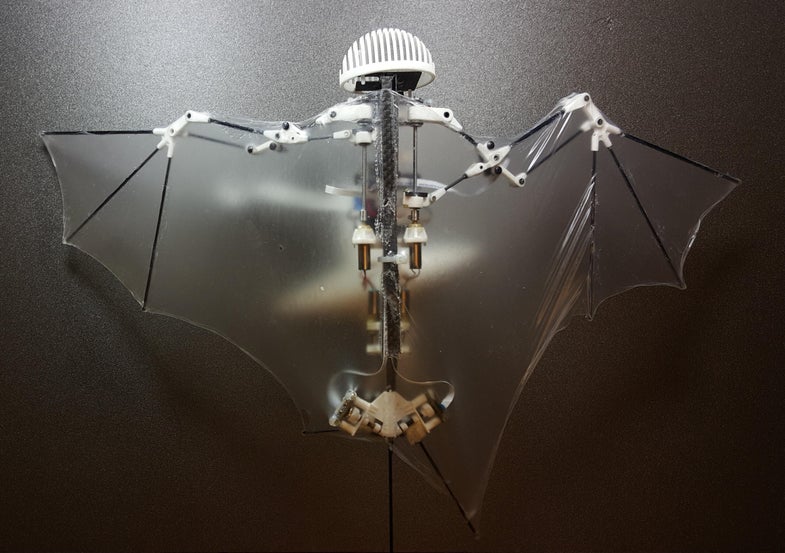 Bats are strange creatures. They dart through the sky on wings made of skin, their tiny bodies swooping and swerving as they hunt insects for hours on end. They boast a compact, efficient, lightweight form, which makes them an ideal inspiration for a flapping robot. Bat Bot, created by researchers at University of Illinois at Urbana-Champaign’s Coordinated Science Laboratory and the California Institute of Technology, is a high-tech flying machine inspired by bat-like efficiency.

The Bat Bot is an example of biomimicry, where engineers and scientists make a machine directly inspired by nature. It’s also—as an unmanned flying machine—technically a drone, but one that doesn’t rely on multiple spinning rotors like a helicopter or a rigid fixed wing, like an airplane. Instead the three-ounce robot travels with a careful flapping motion, the membrane of its thin wings carrying it through the air like an actual bat.

What use might there be for such a critter? Because its body is small and flexible, a future incarnation of the Bat Bot could fly inside collapsed buildings, maneuvering around fresh ruins to inspect the damage and search for people trapped inside.

“We imagine a second application to be just aerial assistance for humans,” said Seth Hutchinson, one of the authors of the study.

“Take elderly people who live in multilevel homes, for example,” he said. “Ground robots aren’t able to go up and down stairs, so some kind of ability to move between floors—to bring medicines or to monitor the adults in the situation just to be sure that they’re safe and haven’t fallen down or something of that sort—would be a useful thing, particularly as population continues to age.”

But Bat Bot needs to work on sticking its landings before it can fly medicine to seniors in distress. A future goal for the project is to have the robot perch like a bat, clinging in place, but for now that kind of precision landing is out of reach.

Still, it’s impressive to see the robot flapping through the air, and it’s tempting to imagine a future where this little gangly machine becomes a harbinger of rescue.