Now a freeway, the Internet might soon become a turnpike. How new laws could transform cyberspaceâ€”and the way you surf it 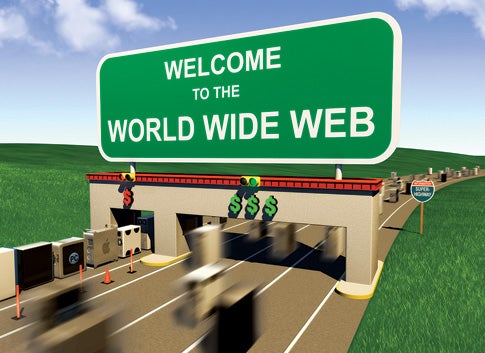 For more on the proposed Web Toll, stay tuned to PopSci’s podcast.

What if the Internet were like cable television, with Web sites grouped like channels into either basic or premium offerings? What if a few big companies decided which sites loaded quickly and which ones slowly, or not at all, on your computer? Welcome to the brave new Web, brought to you by Verizon, Bell South, AT&T and the other telecommunications giants (including PopSci´s parent company, Time Warner) that are now lobbying Congress to block laws that would prevent a two-tiered Internet, with a fast lane for Web sites able to afford it and a slow lane for everyone else.

Specifically, such companies want to charge Web sites for the speedy delivery of streaming video, television, movies and other high-bandwidth data to their customers. If they get their way (Congress may vote on the matter before the year is out), the days of wide-open cyberspace are numbered.

As things stand now, the telecoms provide the lines-copper, cable or fiber-optic-and the other hardware that connects Web sites to consumers. But they don´t influence, or profit from, the content that flows to you from, say, cinemanow.com; they simply supply the pipelines. In effect, they are impartial middlemen, leaving you free to browse the entire Internet without worrying about connection speeds to your favorite sites.

That looks set to change. In April a House subcommittee rejected a measure by Representative Edward Markey of Massachusetts that would have prevented telecoms from charging Web sites extra fees based on bandwidth usage. The telecom industry sees such remuneration as fair compensation for the substantial cost of maintaining and upgrading the infrastructure that makes high-bandwidth services, such as streaming video, possible. Christopher Yoo, a professor at Vanderbilt University Law School, argues that consumers should be willing to pay for faster delivery of content on the Internet, just as many FedEx customers willingly shell out extra for overnight delivery. “A regulatory approach that allows companies to pursue a strategy like FedEx´s makes sense,” he says.

On a technical level, creating this so-called Internet fast lane is easy. In the current system, network devices called differentiated service routers prioritize data, assigning more bandwidth to, for example, an Internet telephone call or streaming video than to an e-mail message. With a tiered Internet, such routing technology could be used preferentially to deliver either the telecoms´ own services or those of companies who had paid the requisite fees.

What does this mean for the rest of us? A stealth Web tax, for one thing. “Google and Amazon and Yahoo are not going to slice those payments out of their profit margins and eat them,” says Ben Scott, policy director for Free Press, a nonprofit group that monitors media-related legislation. “They´re going to pass them on to the consumer. So I´ll end up paying twice. I´m going to pay my $29.99 a month for access, and then I´m going to pay
higher prices for consumer goods all across the economy because these Internet companies will charge more for online advertising.”

Worse still, Scott argues, the plan stands to sour your Web experience. If, for instance, your favorite blogger refused to ante up, her pages would load more slowly on your computer than would content from Web sites that had paid the fees. Which brings up another sticking point: A tiered system would give established companies with deep pockets a huge competitive edge over cash-strapped start-ups consigned to slow lanes. “We have to remember that some of the companies that we now consider to be titans of the Internet started literally as guys in a garage,” Scott says.”That´s the beauty and the brilliance of the Internet, yet we´re cavalierly talking about tossing it out the window.”