What it would take for cars to actually fly

Since the 1800s, inventors have struggled to design a hybrid craft that could traverse both earth and sky—but flying cars might soon get a new lift. 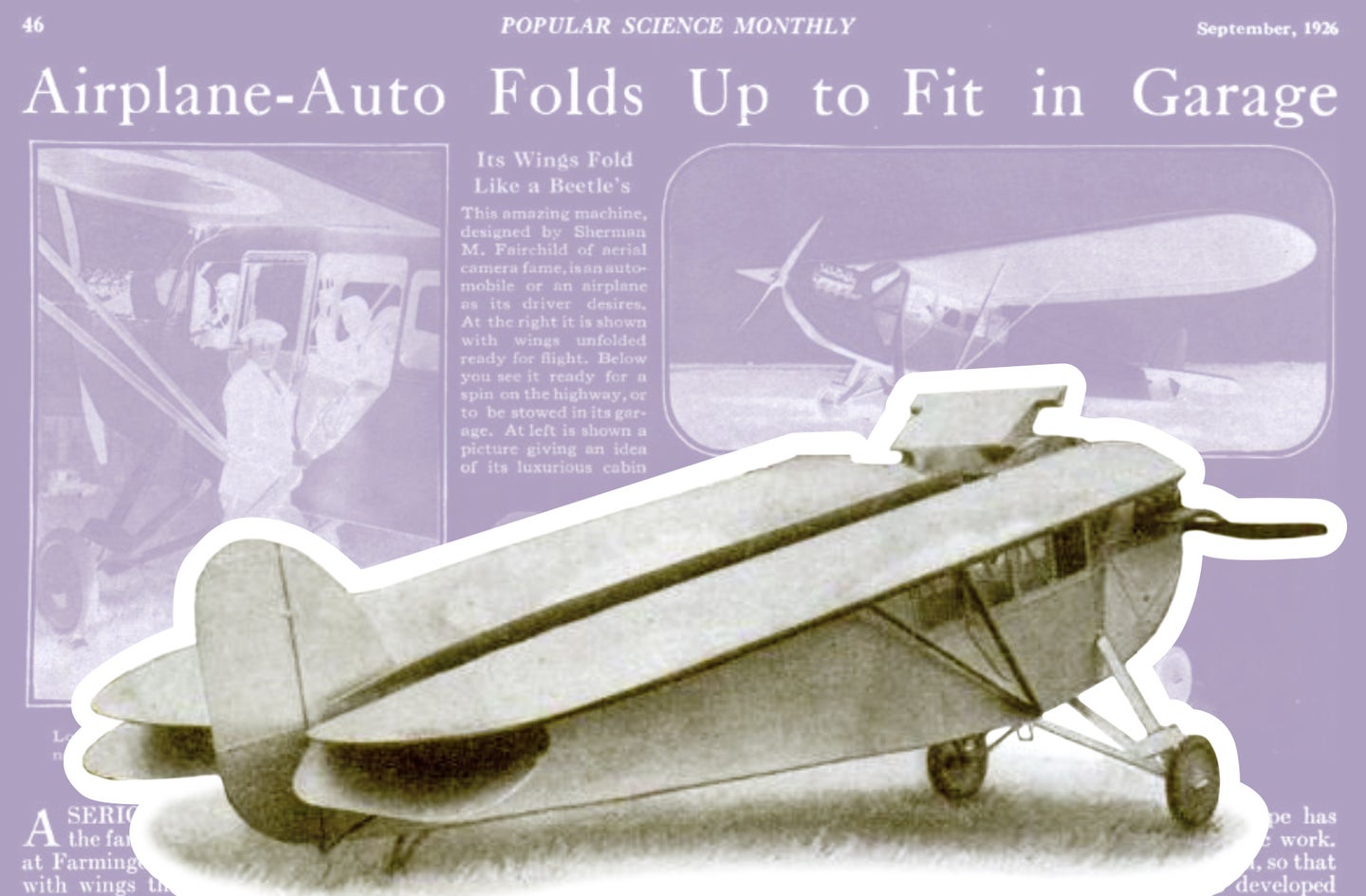 Decades before Orville and Wilbur Wright propellered into the air, the dream of flying cars (or carriages) got an unexpected lift. In 1856, French sea captain Jean-Marie Le Bris sailed through the skies in a horse-drawn glider fashioned after an albatross. The aptly named L’Albatros artificiel, or the Artificial Albatross, carried Le Bris 300 feet off the ground—an impressive height for the mid-19th century when the first steam-powered automobiles were only just beginning to dot roadways. With this seminal, albeit short-lived, flight, a flying-car archetype was born. Subsequent iterations of soaring carriages followed with varying levels of success, such as aviation-industry titan Glenn Curtiss’s 1917 self-propelling Autoplane. While a much improved model, his car-craft’s hang-time was only marginally better than Le Bris’.

Then in the 1920s, Sherman Fairchild, founder of Fairchild Industries whose father George W. Fairchild was the cofounder and first president of IBM, came up with a more practical concept. This concept actually worked! As Popular Science reported in September 1926, Sherman Fairchild designed and built one of the first flying cars, with wings that “fold like a beetle’s.” At the time, Popular Science predicted that Fairchild’s airplane-auto, which he used to tote his golfing pals around the Long Island’s Gold Coast, would become “a serious competitor for space in the family garage.” Despite a century of noteworthy attempts to mainstream flying cars, however, the obstacles have proved too great. But promising developments in aviation technology and engineering suggests that this may soon change.

“When the airplane was invented, people came up with all kinds of amazing ideas about what airplanes were going to do,” says aviation historian Janet Bednarek, a history professor at the University of Dayton in Ohio. Society had lofty hopes for the flying crafts: “They were going to create world peace. They were going to improve human beings, and bring about greater racial and gender equality,” she says. Of course, the idea of fusing already popular automobiles with novel airplanes was even more appealing. “It’s the most persistent part of [the aviation ideal] that doesn’t die,” Bednarek notes. If fiction is any gauge (Chitty Chitty Bang Bang, The Jetsons, Back to the Future), flying cars have captured our collective imagination; they often represent individual freedom—the ability to go wherever, whenever, even through time.

The concept of flying cars, or at least an airplane in every garage, had been so firmly fixed in the national consciousness that in 1934, Eugene Vidal, newly-minted director of the US Bureau of Air Commerce, launched a contest for an affordable family airplane, dubbed flivver aircraft (flivver being slang for cheap cars, made popular by Ford’s Model T). The contest prompted entries ranging from auto companies to independent inventors like Waldo Waterman, who used the frame of a Studebaker to build his contest-winning Aerobile, or Arrowplane. But even with Uncle Sam’s backing, flying car sales never took off.

A decade later as World War II came to a close, many trained pilots returned home and the notion of an airplane in every garage got another lift. Inventor Robert Fulton (an alleged descendant of the famed steam-engine pioneer with the same name) introduced the Airphibian—an airplane that could be modified to an auto simply by detaching the wings and propeller. That same decade, the first backpack helicopter, or hoppicopter, was built by Horace Pentecost, which Popular Science covered in July 1945. However these designs didn’t gain traction, resulting in another disappointing decade for flying car enthusiasts.

Since the advent of aviation, flying cars have never progressed from prototype to reality. “Having a car attached to an airplane is hard to make efficient,” says Ella Atkins, an aerospace engineering professor and director of the University of Michigan’s Autonomous Aerospace Systems Lab. “The car is not going to notice much difference from having the parts of an airplane, but the plane is going to really be impacted by the presence of a car.”

It’s more than just impractical engineering that has grounded the flying car dream. After all, as far back as 1926, Fairchild’s foldable design seemed to have struck a crude auto-airplane compromise. But he couldn’t solve the complex matter of operating the flying craft itself. “Pilots need a lot more training and practice to become proficient than 16-year-olds who get their drivers’ licenses,” Atkins says.

Plus, flying a rusty jalopy is much riskier than driving one, even for a trained pilot. Had Vidal succeeded in coaxing manufacturers to build and sell affordable family aircraft in 1934, his grand vision of an airplane in every garage likely would have failed when the cost of upkeep began breaking family budgets. “Airplanes are very maintenance intensive,” Bednarek says. “There are a lot more costs associated with owning an airplane than with owning a car.”

In the case of aircraft, maintenance is not just about keeping the airborne passengers safe; the world below is also vulnerable, too. “I’ve been in a car that actually had its [backseat] battery drop through the floor,” Atkins says. If this happened in a flying car, pulling over on the side of the road is not an option for a pilot, she adds. Batteries dropping from the sky would send shockwaves through any community, and yet pelting neighborhoods with projectiled parts might not even be flying cars’ worst fallout. “It’s about the noise. It’s about the annoyance,” says Atkins, who adds that these crafts could also potentially create a significant amount of congestion. “We can’t just stop in bumper to bumper air traffic,” she adds. “Even if we have hover-capable aircraft, we are burning a tremendous amount of fuel or electricity just to stay in the air.”

[Related: From the archives: A grand tribute and eulogy for Zeppelins]

What’s more, any congestion would only ratchet up existing emissions from aircrafts. Aviation already pumps out 2.5 percent of the planet’s greenhouse gases without the added snarl and stink of flying-car traffic jams. Not surprisingly the 21st century offers its own special twist: climate change. If aviation were a country, it would rank sixth in the world for CO2 emissions. “Aviation is in the crosshairs as a huge emitter,” says Bednarek, who considers climate change an existential threat to aviation in general, let alone flying cars.

Despite so many obstacles, the transportation landscape might finally be ready for flying cars—and it’s mostly thanks to deep-pocketed investors. A collection of companies like Terrafugia, Klein Vision, Pal-V, and Aeromobil have announced plans to soon offer true hybrid flying cars , equally capable of cruising down the freeway and soaring through the skies. Bell Nexus and Joby Aviation (which in 2020 acquired Uber Elevate, the ridesharing company’s aerial initiative), have their sights set on all-electric, vertical take-off and landing (eVTOL) air taxis, set to debut in 2023. “There are a couple of planned communities being designed in Northern California,” says Atkins, “with a model of actually having solar panels to charge eVTOLs for a commuter service to go in and out of the Bay area each day.”

But even as flying cars seem on the cusp of a breakthrough, a whole new class of vehicles are quickly cluttering the skies: autonomous drones that are increasingly being used for package delivery, surveillance, mapping, news, and entertainment. “The biggest obstacle to all this,” Atkins explains, “is transitioning away from voice-based air traffic control to data link.” By data link, she means enabling aircraft to communicate directly with one another, with little or no human intervention.

Before flying cars, air taxis, or drones can take to the skies in numbers, air traffic control will need a serious upgrade. Atkins envisions a mainly autonomous solution—an Urban Air Mobility, or UAM, air traffic control system. An UAM would enable aircraft to communicate directly with one other (no humans in the loop), as well as with a central command center and community-based centers, which, when combined, would be capable of handling thousands of simultaneous flights over a metropolitan area.

Bednarek is not so sanguine about the coming whirlwind of air traffic, including flying cars. “I think people would actually be rather repulsed by the environmental impact,” she says, citing the visual, noise, and carbon pollution. “I’m not entirely convinced that we should get there, even if we could.” She concedes, though, that flying cars remain “probably the most persistent dream of those who are enthusiastic about flight.”