Autonomous Tractor Concept Takes The Farmers Out Of Farming 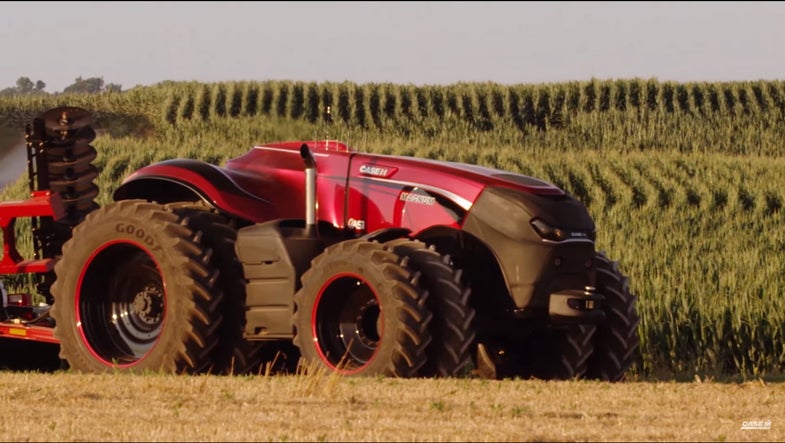 Tractors revolutionized farming. We’ve written about tractors in Popular Science for a century, and like the use of domesticated animals before them, tractors greatly increased the amount of land a farmer could use, and because tractors ran on fuels and not grains, using tractors instead of horses and mules freed up former animal feed land for other crops. The revolution first took off in the 1920s, and it continues to this day. Only this time, instead of a human driving the tractor across the land, autonomous tractors drive themselves.

This is the Case IH Autonomous Concept Vehicle, by Case IH Agriculture. It’s a tractor without the person, relying instead on remote control, sensors, and autonomy. Here, it detects an obstacle, alerts the farmer, who then steers it clear of the pole in its path.

This concept tractor is hardly the first. Companies developed autonomous tractors at least as early as 2011, and the Autonomous Tractor Corporation retrofits existing tractors to turn them into autonomous tools. The Case IH model isn’t the revolution itself, it’s just the latest, er, case of a company following the trend. Like many features of mechanized farming before it, the ultimate goal isn’t to replace farm work, but to change the farmer from a working in the fields into a manager of machines.

Watch the Case IH concept below: